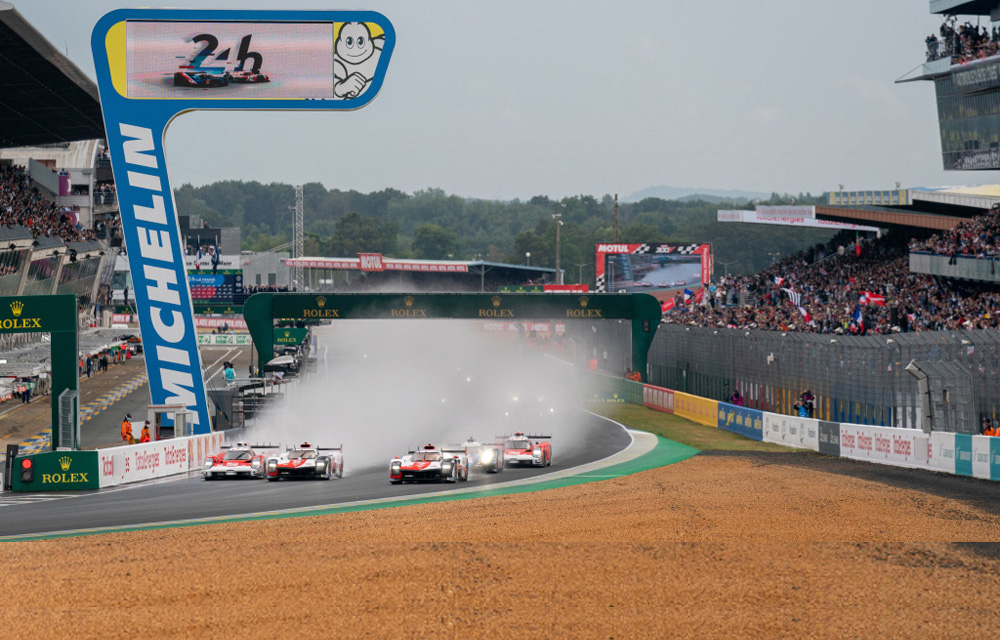 The full entry list for the 2022 Le Mans 24 Hours was revealed today by the Automobile Club de l’Ouest. It features 62 cars across four classes set to compete at the Circuit de la Sarthe June 11-12. This list was set to be published earlier in the month, but the fallout of Russia’s invasion of Ukraine prompted the ACO to delay the reveal in order to factor in the sanctions imposed both economically and administratively on Russian and Belarusian interests.

This will be the first “normal” Le Mans since the start of the pandemic, with the event returning to its traditional June slot, with no limit on fan attendance and a week-long program of events.

An identical field returns for the second year of the Hypercar class at La Sarthe. There are five confirmed entries, with a pair of Toyota GAZOO Racing GR010 HYBRIDs set to try for a fifth consecutive win in the event for the Japanese marque, up against a single Alpine A480 Gibson and two American Glickenhaus Racing 007 LMHs.

The one clear omission is French giant Peugeot, which — as previously revealed by RACER, has opted to delay the debut of its new 9X8 Hypercar until after Le Mans. The debut of the team’s new challenger is likely to come at Monza in July.

In LMP2, the only category with Goodyear tires (the rest are Michelin), there are 27 ORECA 07 Gibsons entered, with 10 of them entered in the Pro/Am division. Alongside the 15 WEC runners are a group made up of ELMS and Asian Le Mans Series regulars.

The leading news here is the addition of a pair of Algarve Pro Racing ORECAs. The Portuguese-flagged, British-run outfit applied for late entries earlier this week after its ties with Roman Rusinov and the G-Drive brand were severed due to sanctions.

The GTE ranks, meanwhile, feature many notable entries. In Pro, seven cars are set to compete. Alongside the five full-season WEC cars from AF Corse, Porsche and Corvette Racing, there are two additional crews from the IMSA paddock listed. One is a second Corvette Racing C8.R with Tommy Milner, Nick Tandy and Alex Sims as drivers, the other a Riley Motorsports Ferrari with Felipe Fraga, Sam Bird and Supercars star Shane Van Gisbergen. Riley’s entry comes via an automatic entry for its LMP3 title win in IMSA.

Am is a significantly larger category for this years’ event, with 23 cars, 13 from the WEC and 10 from elsewhere.

Inception Racing’s (AF Corse-run) Ferrari is notable. The Asian Le Mans Series GT champion returns to Le Mans with Alex West as the only driver listed. This is due to a deal with Garage 59, meaning Inception’s trio from Le Mans last year (Oliver Millroy, Brendan Iribe and Ben Barnicoat) are racing elsewhere, aboard the No. 56 Porsche with German outfit Team Project 1.

“Racing at Le Mans is the pinnacle for sports car and GT teams and for Garage 59 the desire has always been to race at La Sarthe,” Inception Racing said in a statement. “Most of the team members have competed at Le Mans in the past and now, with GT3 forming the basis of the Le Mans GT class in the future, it is a great opportunity for the team to gain further experience of this great race.”

Another Porsche worth mentioning is Hardpoint Motorsport’s 911, spearheaded by Rob Feriol, another IMSA automatic entry. Another IMSA regular, WeatherTech Racing, has also been invited, with only Cooper MacNeil listed in the team’s Porsche.

Like last year, Aston Martin has no representation in GTE Pro, although customer teams will ensure the British marque is present on the grid in Am, with TF Sport, Northwest AMR and D’Station Racing all returning via full-season FIA WEC programs.

No reserve entries have been named at this point.

“What a line-up!” said ACO president Pierre Fillon. “After unveiling a packed program of activities for race fans, we are delighted to announce a high-caliber 62-car field that promises a thrilling race in every class for the 99th anniversary of the 24 Hours of Le Mans. June cannot come quickly enough! We are so looking forward to a great celebration of endurance racing and a week of exciting track action.”