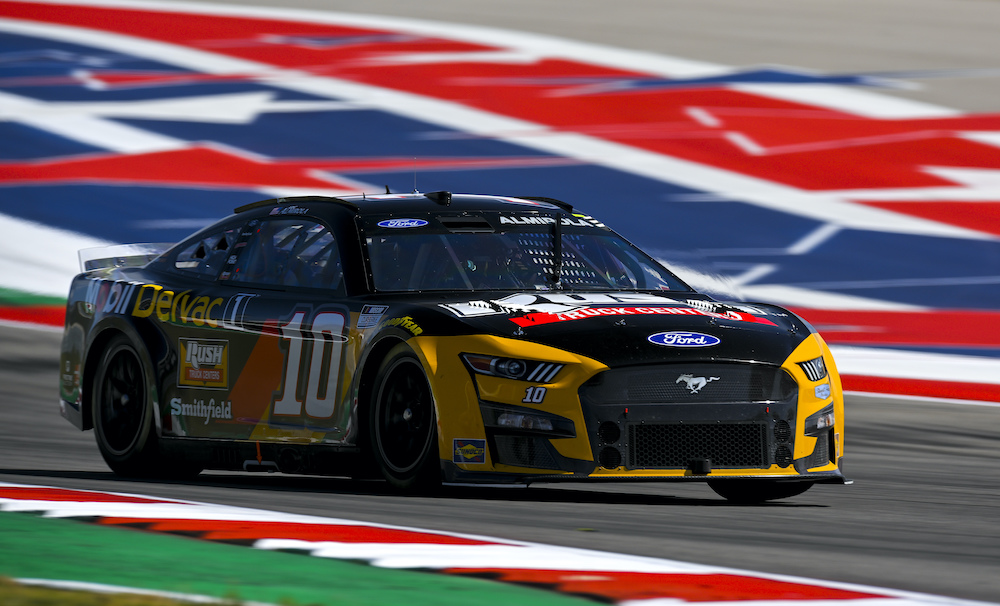 Aric Almirola is calling his shot.

“With the way things are going, I’ve never had more confidence,” the Stewart-Haas Racing driver said of the upcoming races at Richmond Raceway and Martinsville Speedway. “This new car levels the playing field and puts it on the drivers to perform. We always run well at Richmond and Martinsville, even when we don’t have the best setup, so I’m really looking forward to it.”

Almirola has two top-10 finishes in the last three races at both Richmond and Martinsville. First up this weekend is Richmond, where a large part of the battle is tire management.

“Unlike last year, we’re in a great points position, and we get to qualify so we’re not backed into a points hold and can race without as much pressure as we did last year,” said Almirola. “When I got out of the car on Sunday at COTA, Drew said, ‘Next weekend is going to be a good one,’ so the whole team is confident heading into the weekend.”

Not a lot went right for Almirola through much of last season. Bad results led to an even worse starting position the following week because there was no qualifying. The performance matrix set the field, and Almirola’s performance wasn’t anything to write home about. Almirola was 27th in points when he won in New Hampshire in July.

It is a very different story early this season. Almirola was the only Cup Series driver with a top-10 finish in every race through the first three races.

When you look at the point standings, it isn’t surprising that the driver leading the Cup Series points, Chase Elliott, has the best average finish in the series. Elliott sits at the top with a clean 11th-place average finish.

But the driver with the second-best average finish is Almirola, who is having a quietly strong start. Almirola is eighth in points with an average finish of 11.7.

“The main thing is that this 10 team does not give up,” said Almirola. “Every race this season has had its ups and downs and we have made the most out of the day we are given. We’re the only team in the series right now that has stayed on the lead lap, and it shows.

“Last weekend, we cut a tire and went back to 34th with six laps to go – then we had another tire issue. We pitted twice from 34th and still ended up with a top 20. No matter the circumstances, we race for one more spot until the checkered flag waves, and I think our position is the points has shown that. Our time will come.”