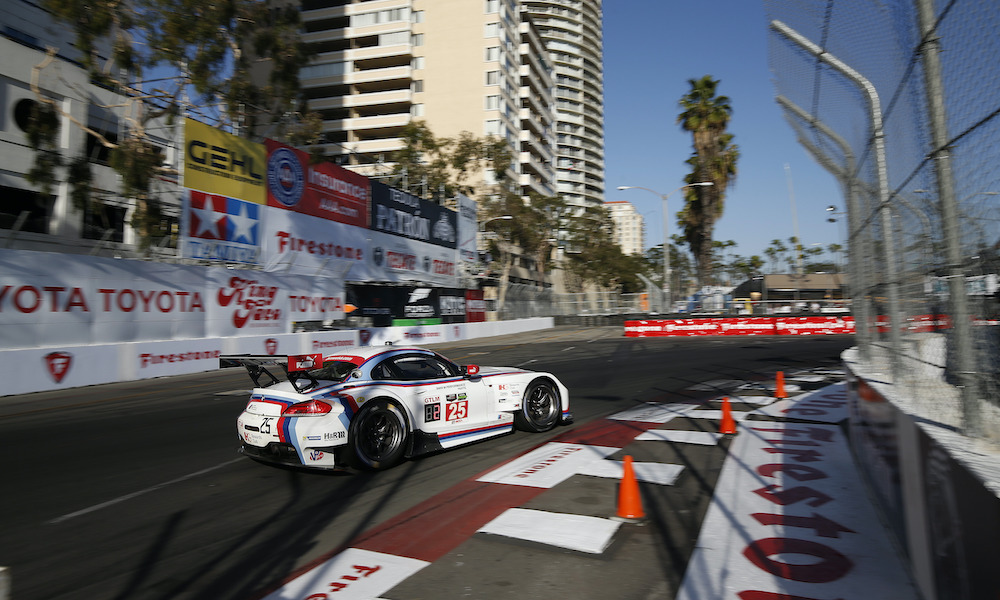 When Bill Auberlen was a kid, his father, Gary – himself a racer on two wheels and four – would park his motorhome at the Grand Prix of Long Beach for the races. Young Bill would walk around the circuit with a recorder, taping the sounds of the racecars to listen to later. While his father was the biggest influence in setting Bill on his career path, the Grand Prix of Long Beach played a pivotal role as well. Auberlen would go on to win two races at the event, and on Thursday was inducted into the Motorsports Walk of Fame in front of the Convention Center along with Alex Zanardi.

“What a total honor to be inducted into the Long Beach Walk of Fame,” he said during the induction. “It’s beyond words to express my gratitude for this honor, totally humbled. It’s crazy. Who would have thought… It was 1975, and I stood right there; I was seven years old. And I had a tape recorder in my little hand, and I would record the sound of every race car. And then I would take them home, and I would listen to the sounds, and if we played ‘name that car in two notes,’ I could do that. It basically was the impression and it was ingrained in my little mind forever. Long Beach Grand Prix set the stage for the rest of my racing career.”

Auberlen, who grew up in nearby Redondo Beach, won Long Beach in 2013 in American Le Mans Series GT driving a BMW Team RLL Z4 GTE , and again in 2015 in the United SportsCar Championship’s GTLM category in a Z4 (main image). His early career at Long Beach doesn’t hold the best memories, such as crashing a Formula Atlantic car in Turn1 on lap 1. At the other end of the spectrum is that 2013 win.

“The first win was insane,” he said. “To finally win here, because I’d gotten third, second… it was the first victory because then we wound up taking that trophy, going to Redondo Beach to a restaurant. We put it out there – I took my whole team, crew, friends, everybody showed up. Then the mayor showed up and offered to give me the key to the city. It was an unbelievable experience.”

Auberlen was perhaps on track to become an IndyCar driver, but took a chance on an opportunity with BMW. That relationship has been ongoing for three decades, putting him in a variety of GT cars and prototypes. He recently started his 500th race with BMW at the 12 Hours of Sebring. A two-time winner of the Rolex 24 at Daytona, Auberlen holds the record for IMSA wins at 64.

This weekend Auberlen will be racing the No. 96 Turner Motorsports BMW M4 GT3 in the GTD category, co-driving with Robby Foley, in the IMSA Weather Tech SportsCar Championship race on Saturday afternoon.

“At seven years old, I couldn’t even have had a dream big enough that would have somehow put me in a racecar in this beautiful, symbolic track,” he said. “This goes to show that even the biggest dreams do come true.”