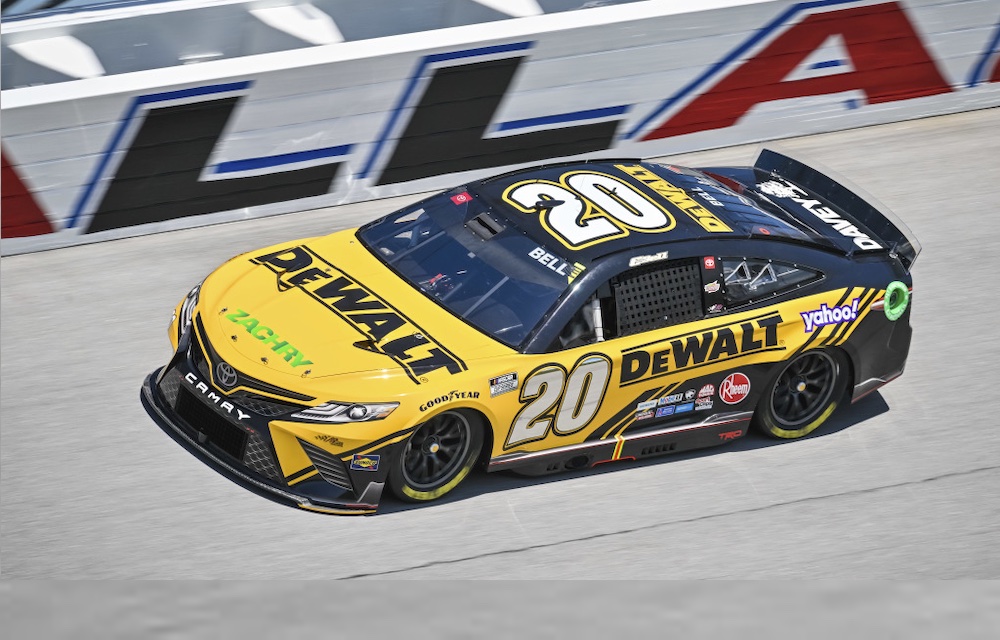 The all-JGR Toyota front row marks the first time the team has swept top qualifying honors (in a qualifying session) at Talladega. The teammates will lead the field to green in Sunday’s GEICO 500 (3 p.m. ET, FOX, MRN, SiriusXM NASCAR Radio).

“I can’t say I got anything , that was all my crew guys. I’m just very thankful to be in the position I am driving for Joe Gibbs Racing,’’ said Bell, whose best Talladega finish in four starts is fifth in last fall’s race. “We’ve got a great team and this one is a pretty big thank you to Andy Graves at TRD (Toyota Racing Development). We ride him pretty hard, but I’ll give this engine a 10, Andy.’’

Asked if he thought the wind gusts at the track ultimately made a difference in his pole-winning speed, the 27-year-old smiled and said, “it didn’t hurt.’’

“Even from the first round to the second round I could tell my RPMs picked up really big going down the back straightaway then they were pretty flat going down the front straightaway, so I don’t know if it was an advantage to me, but definitely didn’t hurt,’’ added Bell, whose previous pole position came in March at Las Vegas Motor Speedway.

The 2021 NASCAR Xfinity Series champion Daniel Hemric held the top qualifying position until the final two cars in the second round (Truex and Bell) and will start third in the No. 16 Kaulig Racing Chevrolet. Daniel Suárez was fourth fastest in the No. 99 Trackhouse Racing Chevrolet and reigning NASCAR Cup Series champion Kyle Larson was fifth fastest in the No. 5 Hendrick Motorsports. None of these top-five qualifiers has ever won a NASCAR Cup Series race at the track.

Of note, the top qualifying Ford driver was Joey Logano, who will roll off 13th in the No. 22 Team Penske Mustang on Sunday. Defending race winner Brad Keselowski will start his No. 6 Roush Fenway Keselowski Ford from 15th position on the grid. Keselowski is the winningest driver in the field with six victories.