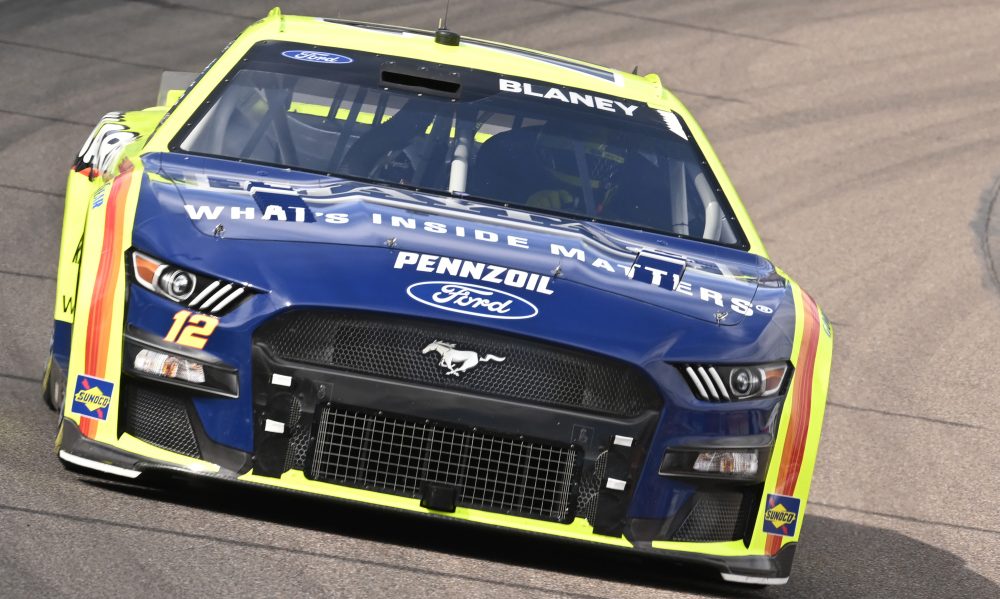 Perhaps with a different set of circumstances on Sunday at Phoenix Raceway, it could have been Ryan Blaney in victory lane.

But he isn’t going to complain about finishing fourth.

The No.12 Ford was fast enough to contend in the Ruoff Mortgage 500. Blaney sat on the pole and led the most laps: 143. He rebounded from a speeding penalty in the first stage to win the second stage, only to be knocked back again when the lug nut fell out of the air gun during pits stop under a lap 221 caution.

The extended pit stop ended being the straw that broke Blaney’s race. He fell to the lower half of the top-10 and had difficulty climbing back toward the front. On the final round of pit stops, Blaney came off pit road fourth. The race restarted for the last time with three laps to go.

“It is hard to tell,” said Blaney of what more he needed. “I lost the lead there on pit road and just could never get back. I don’t know. I just didn’t have quite the speed and was kind of too tight.

“I could drive up through the field and make good spots, and nobody could really do that. You would just get really tight behind people. Not a bad day. A good recovery from last week.”

A week before, Blaney had exited the race at Las Vegas Motor Speedway just past the lap 100 mark when caught in Brad Keselowski’s spin in Turn 4. It was his first DNF of the season.

Despite how easy Blaney made Sunday look, it was far from it. Even while leading, Blaney consistently radioed Team Penske that his car was experiencing a “massive” wheel shake in every corner. At one point before the end of the second stage, Blaney reported everything was shaking.

Blaney was perplexed by the issue during and after the race. Routinely using the apron and dogleg, Blaney told NASCAR.com the shaking and vibrating stopped after going down there on the second-to-last restart.

“It stopped vibrating like crazy and was just pulling to the right whenever I lifted,” Blaney said. “So, I don’t know what happened to it, something in the steering system. I would love to look at it because my wheel was all bent out of shape and it was a mess. Luckily we didn’t go many more laps because I was just kind of hanging on.”

Phoenix was Blaney’s second top-five finish in the first four races. It was also the ninth time in his career that he’s led 100 laps or more in a Cup Series race but failed to win.

“We had a fast car, just a shame we couldn’t contend more for the win,” Blaney said. “It’s cool to see Briscoe get his first win, and we’ll go on to next week.”