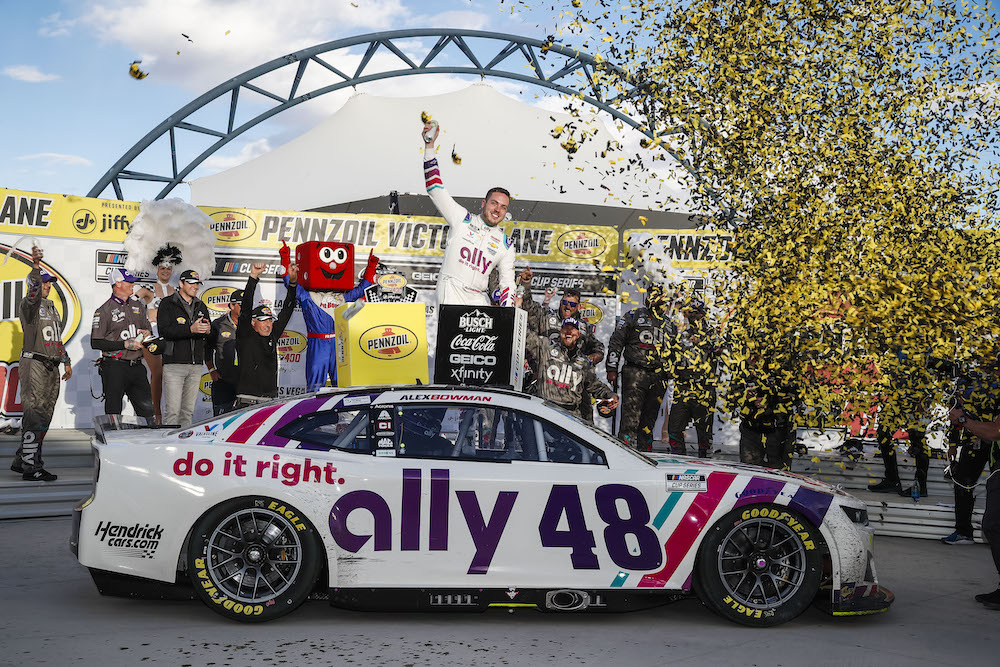 Ives put two tires on the Ally Chevrolet before the overtime restart in the Pennzoil 400, which got Bowman off pit road in second place. Bowman came down pit road in the fourth position.

When Hendrick Motorsports teammate Kyle Larson chose the outside lane, Bowman took the inside of the front row. Bowman fought side-by-side with Larson through the restart, putting his nose ahead of Larson at the white flag before Bowman cleared Larson off Turn 4 for the win.

“I just can’t thank Ally and Chevrolet, everybody from Hendrick Motorsports enough,” Bowman said of his seventh career win. “This thing was so fast all day; I just never really had the track position we needed to show it. But man, what a call by Greg Ives and the guys to take two there. Obviously, it paid off.

“Racing Kyle is always fun; got to race him for a couple wins, and we’ve always raced each other super clean and super respectfully. I just can’t say enough about these guys — it’s been a pretty awful start to the year, so to come out here and get a win on a last restart deal like that is pretty special.”

Bowman led 16 laps and won the first stage. It is his first win of the season and first at Las Vegas.

Larson, who also took two tires on his final pit stop, hung on to finish second. He won the second stage. Ross Chastain finished third after leading a race-high 83 laps.

Kyle Busch finished fourth and William Byron, another two-tire driver, finished fifth. Busch was in control of the race when the final caution flew with three laps to go because of an Erik Jones crash on the frontstretch that collected Darrell Wallace Jr.

Before the caution, Busch fended off repeated charges from teammate Martin Truex Jr. and was the first driver off pit road with four tires. Through the choose rule, Busch lined up third for the restart but could not mount a challenge on the two Hendrick drivers.

Busch led 49 laps in a backup car. He also dealt with a shifter issue early in the race and was spun in a chain reaction at the lap 43 caution.

“Great Ethel M Chocolates Toyota Camry TRD today; it was good, fast at the end and was trying to just do what I could to hold the lead with True. Felt like I inched away finally, and we were coming (to two to go) but wasn’t meant to be.”

There were 23 lead changes among 15 drivers and 12 caution flags in the Pennzoil 400.