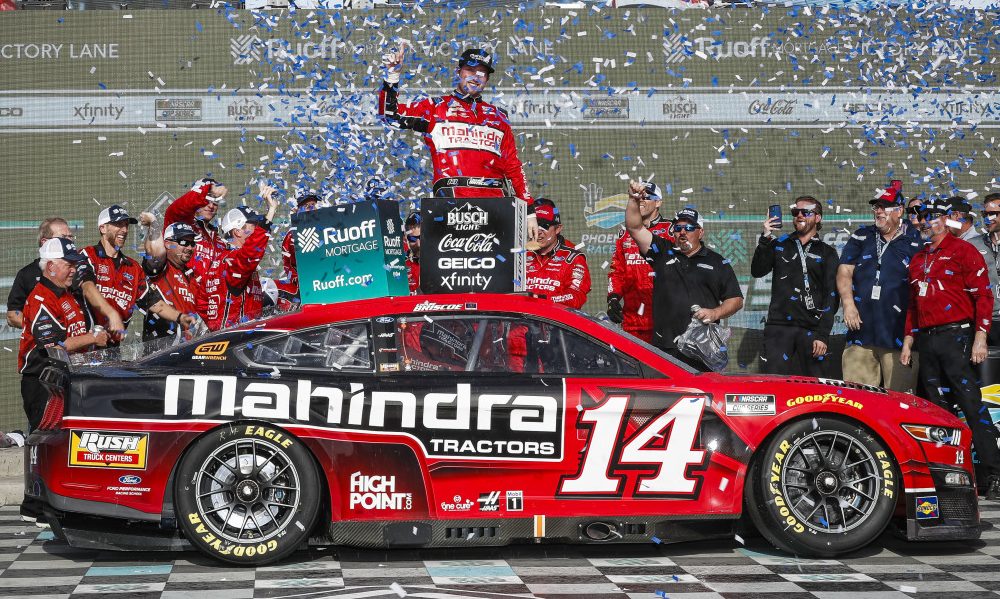 Tony Stewart was already celebrating one win late Sunday when another of his drivers needed congratulations.

The first win occurred in Gainesville, Florida. NHRA Funny Car driver Matt Hagan defeated Blake Alexander in the final round of the Amalie Motor Oil NHRA Gatornationals to deliver Stewart his first win as a team owner. It came in Tony Stewart Racing’s third race weekend in the series.

Thirty minutes later, the second win came. It was approximately 2,051 miles away at Phoenix Raceway.

Sophomore driver Chase Briscoe scored his first NASCAR Cup Series win in an impressive second-half effort during the Ruoff Mortgage 500. Briscoe led 101 laps and held on through two restarts in the final 20 laps.

Stewart was in Gainesville for the NHRA event. He posted a video message for Briscoe on Twitter and spoke to his driver on the phone.

“Hey Chase, just wanted you to know how proud I am and happy for you,” Stewart said in the video. “So excited that a buddy of mine from Indiana has come up just like his father and been a hero. You’re the man, buddy. I’m super proud of you. Super happy for you and the team. We’ll see you soon, man. Take care.”

Briscoe was promoted to the Cup Series in 2021 after dominating the Xfinity Series for nine wins the year before. A worshiper of Stewart and his racing career from dirt to pavement, Briscoe is living out a dream following in his footsteps and now not only driving for Stewart but in the same car number.

“I just told him thank you for believing in me and giving me an opportunity to drive that car,” Briscoe said of his phone call with Stewart in victory lane.

“That car is obviously his, and he has a lot of passion and drive for that car and to take a chance on another guy, like of like himself, a dirt sprint car (driver). We grew up 45 minutes apart. My dad raced against Tony Stewart in sprint cars.

“I was literally a die-hard Tony Stewart fan growing up and die-hard No.14 fan, so for me to add my name to the list of guys that have got the No.14 car to victory lane is definitely special for me.

“Looking back, when I was 6, 7 years old and wearing the Tony Stewart helmet and uniform, I never in a million years thought I would get the No.14 car in victory lane in the Cup Series, and it was cool for him to call and hear how excited he was.”