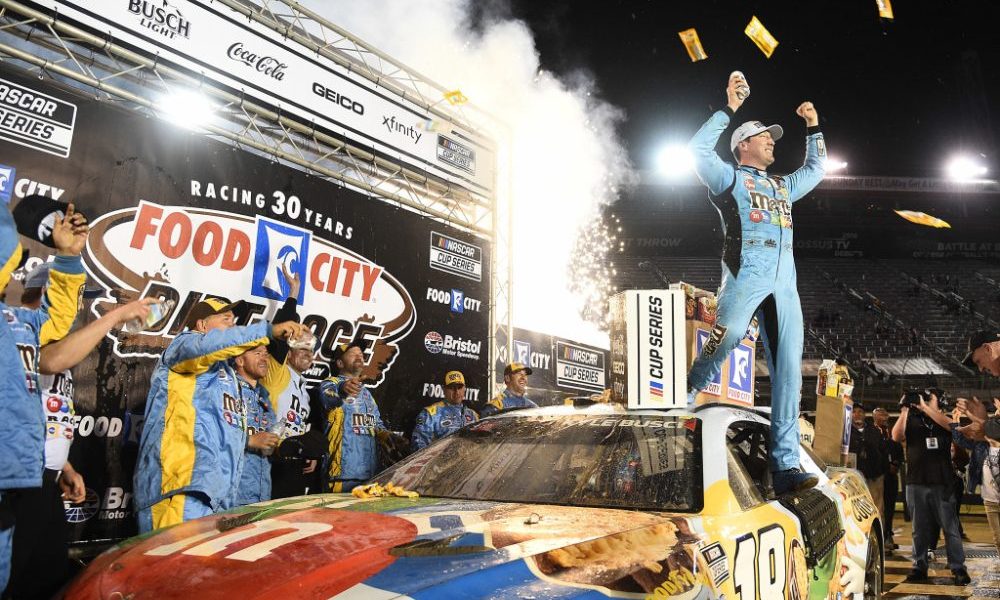 It’s no secret Kyle Busch has had a frustrating start to the season as NASCAR Cup Series teams adapt to a new race car. Going into Sunday night’s race on the dirt at Bristol Motor Speedway, his average finish was 13.5, and not a whole lot had gone Busch and his team’s way.

But it did on the last lap when Tyler Reddick and Chase Briscoe spun, parting the seas for a Busch victory. A victory in which Busch led for a few hundred yards on the only lap that mattered.

“It feels like a miracle we came out of here with a win into this weekend, it being a dirt race, not really knowing what to expect,” crew chief Ben Beshore said, acknowledging the ups and downs of the season so far. “ super excited about this … and it really picks the team up from sort of the rough start we had so far this year.”

Busch nearly pulled off an impressive win at Las Vegas in a car that wasn’t meant to see competition. Having crashed in practice because of a flat tire, Joe Gibbs Racing’s parts car at the track became Busch’s race car.

There was speed in the car for that race and Busch led 49 laps. But the leader is a sitting duck when a late caution comes out, and pit stops come into play, which is what happened to Beshore. He called for Busch to get four tires, and the winning call ended up being Alex Bowman getting two tires.

“Other than that, times that we’ve kind of gotten in the top five, we either got wrecked or something happened,” Beshore said. “We’ve had some mechanical failures. It’s just been up and down. Trying to learn this new car, we haven’t had the good long-run speed. We’re searching for stuff.”

Busch has led two laps in the last three races on his way to three top-10 finishes. He has six top-10 finishes in eight races. On the Bristol dirt, Busch was top 10 in both stages and in a position to capitalize when fortune finally swung his way.

“I don’t think the win here tonight really says anything about our season,” said Busch. “We all have had some vocal meetings this year with some struggles and things like that. I would say realistically, we’ve had a shot – take out the two speedway races, Atlanta and Daytona, there’s seven others. I’d say realistically, we’ve had a shot to win two of those: Vegas and Richmond.

“All of the rest of them have literally been 15th to 20th places, and we are just scrounging to get whatever we could get out of those days.

“A couple of them we messed up on, threw them away. I was running third or going for third on the last lap at COTA and ended up spinning out. That was a bad day.

“We’ve just had some bad luck. Maybe Fontana we were faster than we thought, but it’s just not been our typical Joe Gibbs Racing and Toyota having speed every week.”

It stems back to the car, which Beshore said is still a process to make work the way it needs to.

“We have some pretty good meetings after every race and just try to figure this thing out,” he said. “We’re used to working with the same parts and pieces for so long, you have a pretty good idea that I should have done this, this and this, and that would have helped my problem. Now it’s a whole new bag of variables you got to deal with.

“Us and the engineers are still trying to figure out, try to give him the feel he’s looking for in this new car with the new suspension packages. It’s a work in progress like I’m sure every team is. The learning curve is really steep right now nine races into the season. I’m sure in another eight or nine, we’ll look back on what we did this weekend and (say), why did we do that?

“Everyone is learning so fast right now and developing what they think is the best package for each weekend. Kyle has been really good, giving us good feedback and really working on our cars, trying to get them better every week.”