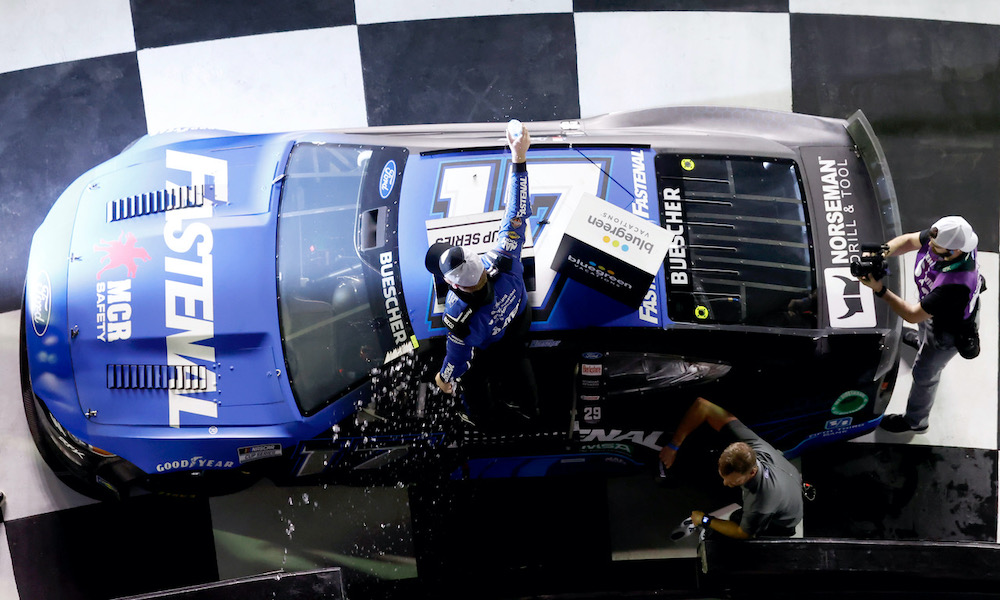 Chris Buescher made it a RFK Racing sweep of the Bluegreen Vacations Duel races Thursday night at Daytona International Speedway, delivering a win in the second race to back up the earlier victory by teammate Brad Keselowski.

Buescher was declared the winner under caution after contact with Joey Logano on the final lap. Logano led off Turn 2 when Buescher moved to his inside and Logano, thinking he was still clear, threw a block. Logano spun to the right and crashed nose-first into the outside wall, and Buescher was ahead of Michael McDowell at the time of caution.

“What a way to start Speedweeks out here, to put both RFK Ford Mustangs in victory lane, give Fastenal their first win on a Cup car,” Buescher said. “It’s not the big show, but we’ve got a really good hotrod here. Hats off to everybody back at the shop. I know it’s been a hectic off-season for everybody in our sport, but we’ve had a lot of changes going on, and it’s cool to see it play out.”

“I just made a mistake,” Logano said. “Dang it. I didn’t think the run would come that quick. It just seemed like – even watching the replay – it happened quicker than I thought it would. I knew a run was going to happen at some point on the last lap; I thought that was pretty early. I didn’t think it would happen there, and the speed that it happened was quicker than I thought. I thought I was still clear, and I wasn’t. Apologize to my race team. I wrecked their car and tore up the 21 as well. It was a dumb move. We were in position to at worse finish fourth and just blew it.”

Wood Brothers Racing rookie Harrison Burton, who hit Logano with the right front of his car as Logano’s car came back off the wall, finished third. The lead draft was the four Ford drivers after gapping the field following green flag pit stops.

Kyle Busch finished fourth ahead of Christopher Bell, Martin Truex Jr., Darrell Wallace Jr. and Ricky Stenhouse Jr. There were eight cars on the lead lap at the end of the race, with Logano listed ninth and Kevin Harvick one lap down in 10th.

Greg Biffle finished 13th and earned a spot in the Daytona 500 for NY Racing Team. Biffle ran out of gas with two laps to go but coasted to the finish and into the big show as Timmy Hill finished four laps down.

“It’s a huge deal,” Biffle said. “We were behind the eight-ball. It’s a last-minute thing; John’s been trying to put it together a long time, and we probably didn’t have everything we needed, but we had a good car, and the guys were able to work through our problems and get it on the track.”

The last lap crash was the only incident of the second Duel, although it had a bit more pack action than the first. There were also many more lead changes – 11 among five drivers.