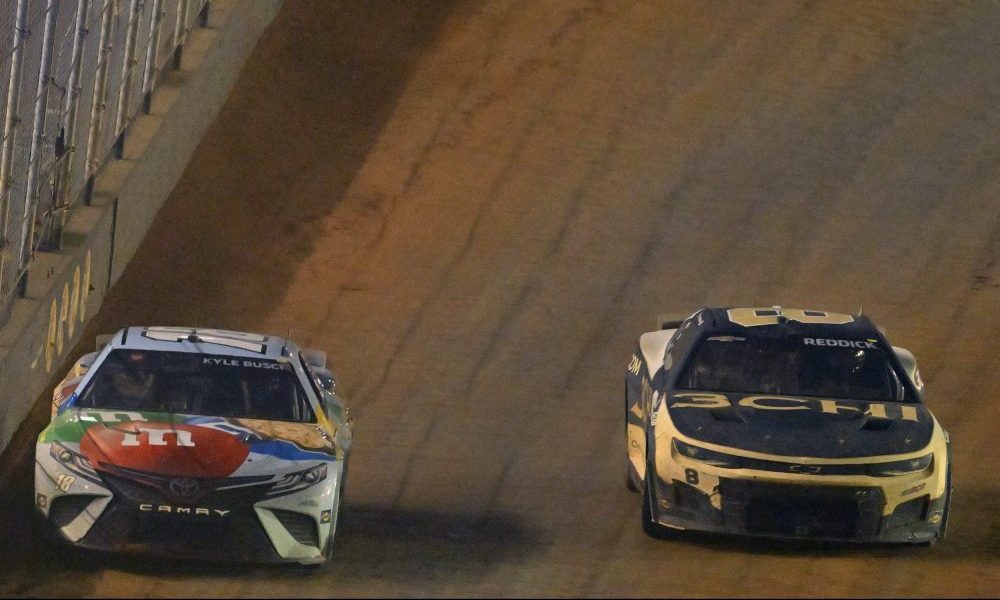 Kyle Busch will take a win any way one comes to him in the NASCAR Cup Series. Even those like Sunday night on the dirt at Bristol Motor Speedway, when he didn’t see it coming his way until the top two drivers spun out.

“I was going into (Turn) 3 as the No.14 dove low and was sliding, and I saw the right rear of the No.14 make contact with the left rear of the No.8 , and then I lost visual,” Busch said. “They were into my window net or on my left front A post, so I couldn’t see them at that point.”

Briscoe went for a slider on Reddick and failed, spinning in Turn 3 and collecting the race leader. Both spun onto the apron in Turn 4, allowing Busch time to catch up and get past Reddick for the win coming to the finish line.

As Briscoe and Reddick tangled, Busch’s spotter Tony Hirschman kept his driver well-informed of what was happening, and while Reddick ended his spin facing the right direction he admitted to not reacting quick enough to get going ahead and across the finish line.

“Tony was just talking to me on the radio that they were sideways, they were spinning, they were going to the bottom of the track, just keep going, keep your foot in it, drive, drive, drive,” Busch said. “But as soon as I came up about the middle of Turn 4, I saw the No.8 down low at the bottom, and I just matted it for everything it had and just drove it off the top and was hoping I could get there in the nick of time.

The finish gave Busch a sense of déjà vu. Busch took advantage of a scuffle between Denny Hamlin and Joey Logano in the final corners in 2013 at Fontana to win that race.

“ reminded me a lot of that,” Busch said.

Reddick had initially driven away when the race restarted for the final time with 20 laps to go as Busch battled Briscoe for second place. Briscoe took the spot and it became a two-man race between Reddick and a hard-charging Briscoe.

Busch was 3.9 seconds behind Reddick and Briscoe when the two made contact. His margin of victory over Reddick was 0.33 seconds.

“It kind of stems back, I think to the last 10 laps or so, Hirschman just coming over and telling me, ‘Hey, keep in it. Stay in it. Keep in position,’” said Busch. “Even though the guys behind us, they were falling off of us and getting further away. But the guys in front of me, they were running hard, racing for the win, obviously.

“My car would just not refire after the rain delays for whatever reasons. It took about 20 laps to get going. But those last few laps, I feel like we kind of maintained with them and at least kept them in our windshield in case something did happen.

“And there you have it. The final corner, chaos ensued, I guess, and then we were able to make it through and steal a win. Back into one. So, it feels good to get one here in this Next Gen race car. It feels good to win on dirt. A lot of caveats.”