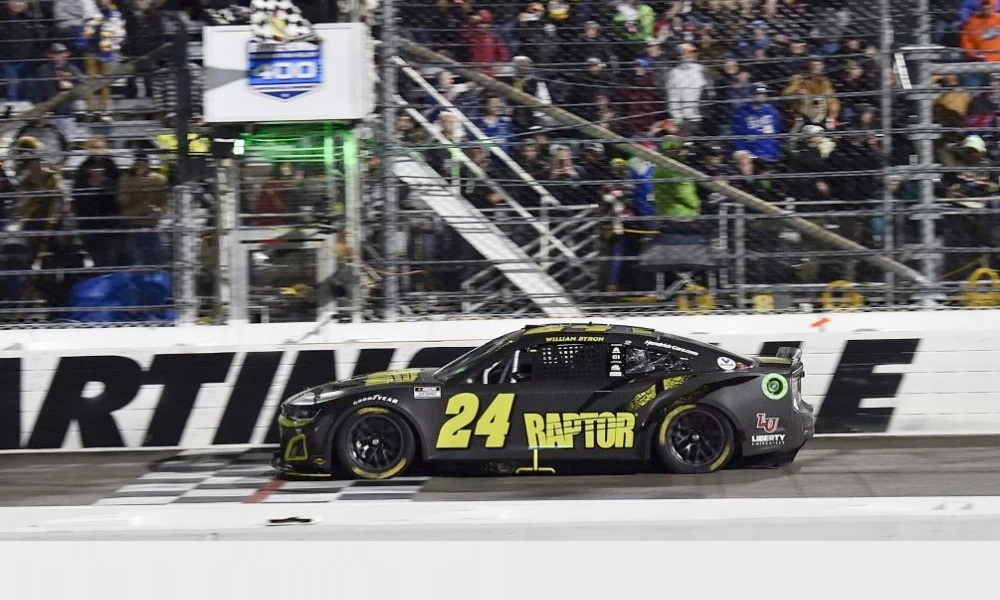 The first night race for the NASCAR Cup Series at Martinsville Speedway was a cakewalk for Hendrick Motorsports—until a late caution sent the race to overtime, that is.

William Byron survived a final restart and a mistake on the white-flag lap to win Saturday night’s Blue-Emu Maximum Pain Relief 400 at the .526-mile short track.

Byron led 212 of the 403 laps. Teammate and pole winner Chase Elliott led the first 185 — as Hendrick Motorsports surpassed 10,000 laps led at Martinsville, becoming the first Cup organization to hit that prodigious number at a single track.

At the end of the two-lap overtime, Byron crossed the finish line .303s ahead of runner-up Joey Logano who couldn’t get close enough to Byron’s No. 24 Chevrolet in the final corner to make a move for the win.

Byron, who also won Thursday night’s NASCAR Camping World Truck Series race, is the first driver to win two events this season. Saturday night’s Cup victory was his first at Martinsville and the fourth of his career.

With his parents on his pit box for the entire race, Byron dedicated the win to his mother.

“When that last caution came out (for Todd Gilliland’s brush with the Turn 4 wall on lap 393), I thought everyone behind us would pit,” Byron said. “Luckily we stayed out — we were aggressive. We felt like we could refire on the tires and be OK.

“You’ve got one of the most aggressive guys behind you with Logano. I chattered the tires in (Turns) 3 and 4 (on the white-flag lap) and left the bottom open, but I was able to kind of block my exit to get a good drive off (the corner).

“This one’s for my mom. This same weekend last year she had kind of a mini-stroke and was diagnosed with brain cancer. It means a lot to have her here, and it’s been a crazy year, but she’s doing great, and thanks, everybody, for the support. I kind of felt like she was riding in there with me. It’s cool to have her here, and I’m definitely going to enjoy this one.”

Logano had mixed emotions after the race. The strong second-place run was gratifying, but it was second place, not first, and it extended his winless streak to 37 races.

“That final restart there; had a front row,” Logano said. “That’s what you can ask for. Got cleared to second and Willy kind of messed up off of (Turn) 4 and let me get to him and he did a really good job of brake-checking. He did what he was supposed to do and kind of got me all stuffed up behind him and I couldn’t accelerate off the corner and be as close as I needed to be down into (Turn) 3 to execute the ole bump-and-run.

“Couldn’t get quite to him, but his corner entry was really strong, too, which I think allowed him to get in there pretty strong. Overall, the Shell-Pennzoil Mustang had a solid run. Just hate being that close to winning and not making it happen. But big points today and it just stings. Second just sucks sometimes, that’s all.”

Elliott won the first two stages. Byron won the race off pit road under caution at the second stage break and remained out front for 118 laps until he came to pit road during a cycle of green-flag stops midway through the final stage.

Blaney held the top spot for five laps before making his final stop and Byron regained the lead when Blaney came to pit road on lap 308.

After completion of the green-flag cycle, NASCAR called the third caution of the race when Denny Hamlin’s ill-handling car stopped on pit road. Byron retained control of the race after the subsequent lap 325 restart, with Austin Dillon moving past Joey Logano into the second position.

That was the last yellow flag until the final caution on lap 393. The four cautions total — with two for stage breaks — were the fewest in a Cup race at Martinsville since 1997. Then again, Saturday night’s race was shortened from 500 to 400 laps.