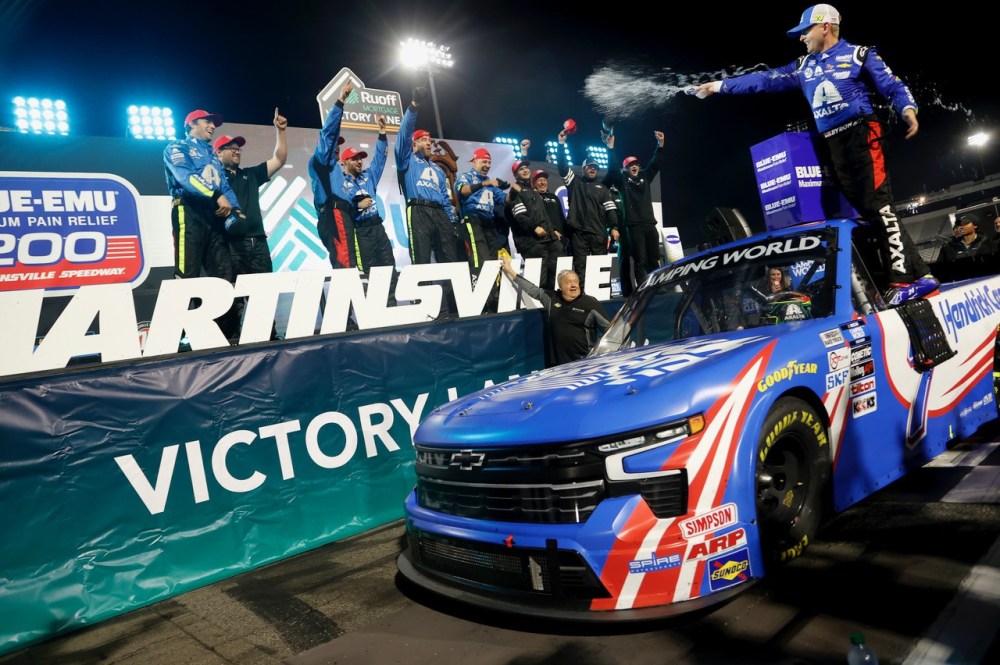 William Byron proved emphatically Thursday night that he hadn’t forgotten how to drive a truck.

Making only his second start in the NASCAR Camping World Truck Series since 2016 — after a blown engine knocked him out of last year’s Nashville race — Byron parlayed perfect pit strategy into a decisive victory in the Blue-Emu Maximum Pain Relief 200 at Martinsville Speedway.

In his last full season in the series in 2016, Byron won seven races before moving on to the Xfinity Series and finally to the Cup Series.

With Kevin “Bono” Manion on his pit box, and with input from Cup crew chief Rudy Fugle, Byron brought his No. 7 Spire Motorsports Chevrolet to pit road for the final time on lap 83 of 200 and took over the lead when the trucks ahead of him pitted at the end of Stage 2 on lap 104.

The 24-year-old from Charlotte, N.C., led all but two of the final 96 laps and beat runner-up Johnny Sauter to the finish line by 1.138s. Kyle Busch ran third, followed by John Hunter Nemechek and defending series champion Ben Rhodes.

“It was a lot of fun,” said Byron, who already has a Cup victory at Atlanta in hand this season. “Great crowd here at Martinsville. I’ve never won a race at Martinsville and struggled here when I was in late models.

“Yeah, just awesome to get the win tonight — a great truck tonight, the HendrickCars.com Chevrolet. Thanks to Spire, all the guys back at their shop. They don’t have a lot of guys, and they do it right, obviously. It was fun to work with Bono, have a little help from Rudy. Obviously, he knows the trucks pretty well.”

The race was a homecoming for Sauter, too. Making his second start of the season, the 2016 series champion was driving a ThorSport Racing Toyota for the first time since last year, his last full-time season with the organization.

Junior Joiner, long-time crew chief for Matt Crafton, returned to call the race for Sauter after retiring from full-time competition at the end of the 2021 season.

“I told Joiner today, I said don’t listen to me when I give you feedback on the first run,” Sauter said. “I called for an adjustment, and I shouldn’t have. I thought we fired off tremendous and just got a little too tight there at the two-thirds mark of the corner…

“It was the first in-house chassis, in-house body for ThorSport. To come home second was pretty solid.”

Sauter chased Byron after the final restart with 36 laps left but couldn’t match the speed of Byron’s Silverado.