As the world celebrates International Women’s Day, IMSA takes great pride in the many women who serve in vital and varied roles throughout the paddock – from the driver’s seat to pit lane and beyond – as well as within the race sanctioning organization.

Women are more prominent at IMSA than ever, in and around the paddock on race weekends and doing their part behind the scenes to keep events running smoothly. From visible positions such as pit lane officials and atop the starter’s stand to those helping manage competition in Race Control.

From those who helped create the automated system that made it easier for teams and drivers to enter and compete to those designing the physical layout of paddocks at IMSA tracks in North America. From those working closely with track promoters to organize and squeeze in all essential activities to those working with teams, sponsors, partners, media and more to see that every IMSA “customer” receives what they need at a given event or throughout the season.

On this special day, some of the women at IMSA explained their emerging roles and the opportunities that exist for others interested in motorsports careers. They are but a few of the many women employed at IMSA who help make it the diverse and energetic organization it is today.

In a nutshell, Hall says, “I handle everything that has to do with registration or membership or entries.”

Her career began as an executive assistant in NASCAR and ventured to Kansas Speedway before joining IMSA in 2016 as a coordinator in Member Services. At IMSA, she helped design the automated system that handles team and driver licensing and entries, credentials, parking and more.

“We were one of the first in motorsports to be able to go to electronic signatures for competitors,” Hall explains. “We process (licenses for) over 800 drivers in a season.”

Overseeing the registration processes for the seven series IMSA sanctions can be an overwhelming task, Hall admits, making sure all entrants meet the various deadlines. Member Services’ development of the automated process has been one of her greatest joys at IMSA.

“All of that comes through the system that we built out in-house,” Hall says. “We get to kind of write our own working software, which is unusual – that doesn’t happen. The people that are actually utilizing it get to write it, so I enjoy being able to produce that out, make our processes more seamless, make things a lot easier for our competitors and our customers.

“Because at the end of the day, if we make their life easier, they want to come back. And that’s the main thing that my department is here for, is customer service.” 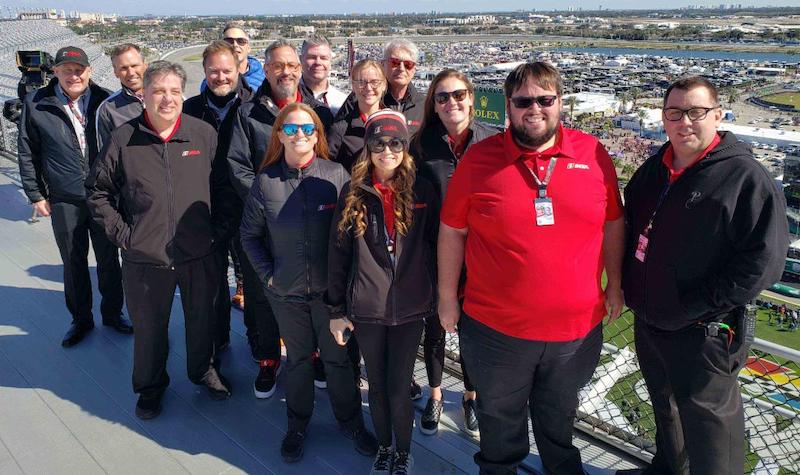 Fox grew up around racing. Her father was an SCCA corner marshal in Florida and would take her to races as a child, where young Lindsay sat in Timing and Scoring and learned the ropes of race operations. She traveled to work her first IMSA race in 1996 and has been going to every race since the late ‘90s.

Her role at IMSA now is dual: the “office” part is in Registration as part of Member Services; on race weekends she works in Race Control. She is the conduit between race officials and teams as operator of the instant messaging system that allows for immediate communication between the two during a race. Fox also analyzes data from the timing loops embedded around tracks to help officials determine if infractions such as passing under a yellow flag have occurred.

And no two days or races are the same.

“I like the change and there’s always something new or a new challenge to tackle,” Fox says. “I do a lot during the full-course yellows and that’s probably my favorite thing. Everybody’s working together and it’s definitely the people that are around and the team that’s been built that makes it enjoyable in the middle of all the stress.”

Fox also appreciates seeing more women working in the IMSA paddock. She had an epiphany of her own a few years ago when she looked around Race Control and noticed nearly half the positions were filled by women.

Eversley has lived by a simple creed that has served her well.

She grew up in racing, her father working on teams and being an auto fabricator. She attended her first IMSA race at 3 months old, the Mobil 1 Twelve Hours of Sebring Presented by Advance Auto Parts. Her brother, Ryan, is an accomplished IMSA driver.

Jamie learned to weld, be a mechanic and ride horses at the family’s “Horses and Horsepower” ranch in Georgia. Up to any challenge, she enlisted in the U.S. Marine Corps. She started at IMSA in 2017 as a truck driver and pit lane official.

As the newly promoted Manager of Logistics, she handles the licensing and filings for IMSA fleet of tractor-trailers for both the U.S. and Canada. She and Mike Neely, IMSA Director of Logistics, handle the boots-on-the-ground effort to set up all series paddocks to make sure each team, manufacturer and supplier have the proper allocated space and access – no simple task with the continuing growth of IMSA fields.

“I really enjoy the problem-solving aspects,” Eversley says. “Every team has different requirements; every different series has a different rulebook with criteria of what teams are allowed to do. Every paddock is different.

“The second we park the last truck and we know everything fits, it’s this amazing satisfaction.”

Eversley also smiles when she sees more women taking on what were once considered non-traditional roles in the paddock – be it engineers, mechanics, truck drivers – and points out there are applications for most any career path available within IMSA.

“A friend of mine went to college for hospitality thinking, ‘I’d like to own a hotel someday.’ They now run one of the most successful trackside hospitality units in American sports car racing,” she says. “The possibilities are endless.

“It is a beautiful, beautiful feeling” seeing more women in more racing roles, added Eversley, who helped pave the way as one of IMSA’s first pit lane officials. “It makes my heart very, very happy if I had anything to do with changing people’s lives.” 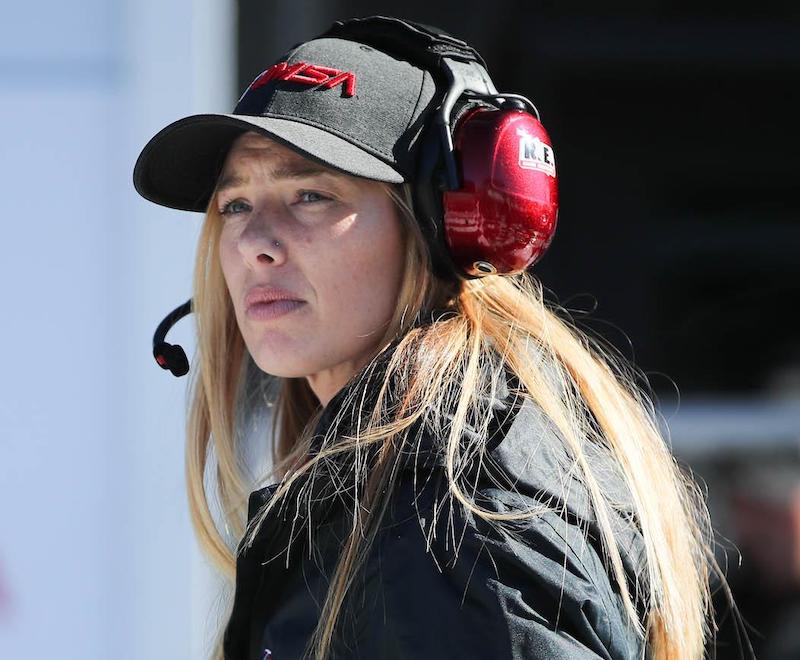 Starting as an IMSA intern in 2012, Nash has been with the company for a decade, primarily in Marketing but also spending some time in International Business Development.

A major in event management at the University of Central Florida, her current role has her doing just that. She works with every track promoter to schedule anything that’s “fan-facing,” including autograph sessions, grid walks, fan forums, pit tours, track signage, prerace and postrace ceremonies detailed down to the second, even the popular transporter parade that will take place next week in downtown Sebring to ramp up excitement for the iconic 12-hour race.

She said her team of six or seven people enter race weekend with a plan for each activity but knowing how quickly things can change with weather and other unexpected variables, backup plans are always in place.

“I always say we’re on a swivel and we’re ready to pivot if and when something needs to change,” Nash says.

Her greatest satisfaction comes when the preparation efforts come off as planned – or as close as possible.

“It’s really nice to put all the planning into it and go and execute and hit your marks and have happy teammates that are excited to be there,” Nash says. “And then you’re also satisfying the client or the promoter or the fans that are there and see your work come to fruition and go as planned and have a positive impact on the race weekend.”

While not fulltime IMSA employees, Kabat and Gray are part of the “weekend warriors” who fill many vital roles at events. Kabat is in her second season as a pit lane official, Gray is a rookie in 2022. They make up half the women on this year’s pit lane staff.

As with many pit lane officials, both women were recruited by Johnny Knotts, IMSA Pit Lane Supervisor.

“He talked me into coming aboard,” says Kabat, a senior studying art education at the University of Green Bay who met Knotts while she worked as a security officer at Road America in Wisconsin. “He said, ‘I think you’d be a really great part of the team.’

“It was an opportunity that I wasn’t really expecting or anticipating,” she continues, “but I’m so glad that I took this opportunity and that I got the opportunity, because it turned out to be something that I love and it is a passion for me now.”

Gray grew up near a dirt track and has been a fan since childhood. “If it takes racing fuel, I love it!” she admits.

She also admitted to being nervous working her first race, the Rolex 24 At Daytona in January, but knew that her training and support from fellow pit officials would carry her through. She’s proud to be counted among the growing number of women at IMSA.

“It speaks to the culture of IMSA that they are supportive of that,” Gray says. “It’s not just there are token females here and there. Women are actively promoted within the organization; I have seen that. I feel like this is hopefully just the beginning and we’ll see where it leads. I’m excited.”

Kabat credits the women who preceded her for paving the way and making things easier for those like her who have followed. She also points to a sisterhood of support that runs throughout the paddock.

“We have kind of this awesome camaraderie among all of us (women) in the paddock,” Kabat explains. “Once we get to know each other, we see each other working together. At the end of the day, they’re there because of their passion and what they want to do, too. It’s really awesome to see these women stepping into these non-conventional roles in racing.”