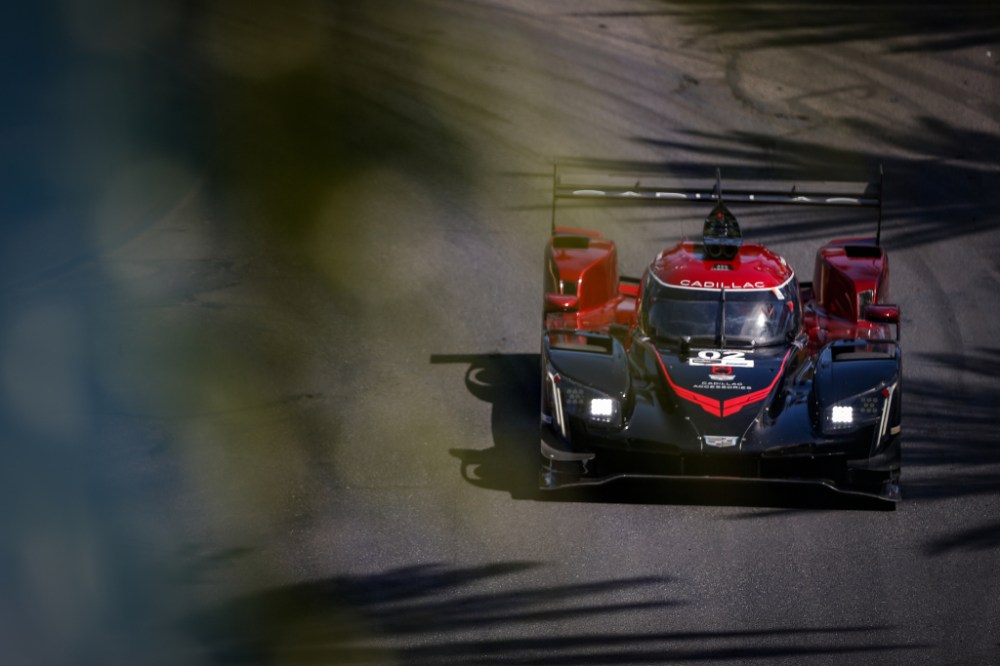 Chip Ganassi Racing set the pace in the second IMSA practice session at Long Beach as Sebastien Bourdais in the No. 01 Cadillac, then Alex Lynn in the No. 02, topped the charts in the closing minutes. Pipo Derani and Action Express Racing led much of the session and it originally looked like he was set to have the top time in both until CGR answered the call. When the checker ended the session, all six DPi entries were within 0.4s of each other — all of them under the standing qualifying lap record despite the high ambient temperature.

Bourdais claimed the quick time at the end with a 1m10.913s, an average speed of 99.91mph. Lynn was a mere 0.077s off Bourdais’s time and Derani had a 1m11.005s lap, putting the top three spread within one tenth of a second. Tom Blomqvist remained the quickest of the Acura drivers, piloting the No. 60 Meyer Shank Racing with Curb Agajanian ARX-06 to fourth, heading Filipe Albuquerque in the Wayne Taylor Racing No. 10 and Tristan Vautier in the No. 5 JDC-Miller Motorsports Cadillac.

The Inception Racing McLaren in the hands of Frederik Schandorff was the quickest of the remaining GTD field at 1m19.490s. Mike Skeen followed with a 1m19.543s lap in the Korthoff Motorsports Mercedes-AMG GT3 and Robby Foley third, 0.134s behind Schandorff in the No. 96 Turner Motorsports BMW that was quickest this morning with Bill Auberlen at the wheel.

The practice went green for the entire 1h45m unlike the morning session. The only practice retirement was the No. 57 Winward Racing Mercedes-AMG GT3 after Russell Ward tagged the wall after completing only five laps.

Up Next: Qualifying for tomorrow’s 1h40m race begins at 5:10 p.m. Pacific, with the GTD/GTD PRO and the DPi drivers each having their own 15 minutes to set a time.