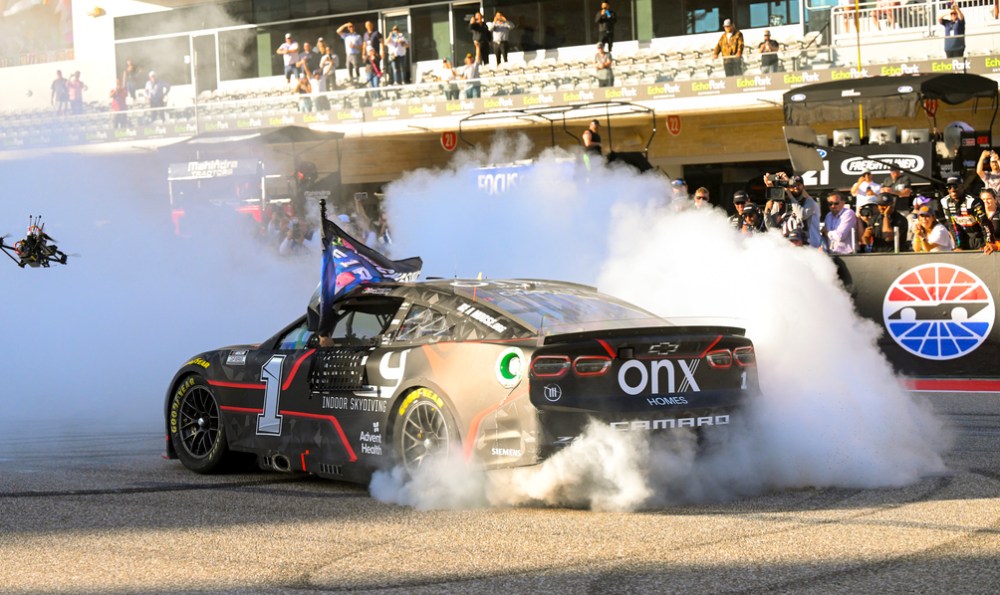 Ross Chastain prevailed at Circuit of The Americas to score his first NASCAR Cup Series win after the lead changed hands three times in the final lap of overtime.

Tyler Reddick was the leader on the final restart, but Chastain muscled his way to the front through the esses. AJ Allmendinger followed Chastain through to take the second position.

Chastain led at the white flag but was pushed out of the way by Allmendinger taking the lead in Turn 15. Next came Alex Bowman, who dove to the inside of Allmendinger and Chastain as they were racing each other through Turn 17 to take the top spot briefly. In Turn 19, Chastain strong-armed Allmendinger and sent him into Bowman.

“That’s insane,” said Chastain. “To go up against some of the best with AJ – I know he’s going to be upset with me, but we raced hard, both of us, and he owes me one. But when it comes to a Cup win, man, I can’t let that go down without a fight.

“Phil Surgen (crew chief) — he is so good. People don’t know how good this group is. I can’t believe Justin Marks hired me to drive this car.”

This is Chastain’s first victory in his 121 starts. It is also the first victory for Justin Marks, Pitbull and Trackhouse Racing.

Blaney led one lap after Daniel Suarez took the lead at the start of the race and led all 15 laps to win the first stage. Suarez ultimately finished 24th, in spit of his strong early run, after being hit by Corey LaJoie at the beginning of the second stage.

Allmendinger finished 33rd after the contact on the last lap.

“At the end of the day, we all got to look at ourselves in the mirror and be OK with it,” said Allmendinger. “Each person’s different. So more than anything proud of Kaulig Racing. The Action Industries Chevy was so fast. I think if we could have just a long run, nobody was going to touch us. Pit stops were great. Everybody at Kaulig Racing – all the men and women – a lot of sleepless nights for them right now trying to get these cars to the next race. So I was doing everything I could to try to sweep the weekend for them. We were that close.

“Like I said, at the end of the day, each person’s got to make the move that they’re comfortable with and that’s fine. We know we had a shot to win the race; It’s tough to win a Cup race, so when you put yourself in position to legitimately run up front all day and have a shot to win it, it’s a pretty great day. Unfortunately needed about two more corners.”

There were two cautions inside the final 10 scheduled laps. The final caution came with three laps to go, just as the race had restarted. Reddick took the lead on the inside of Chastain and Allmendinger right before the caution flew for a mess in Turn 1 between Kyle Larson, Joey Logano, and Kurt Busch.

Reddick led two laps Sunday afternoon. So, too, did Allmendinger.

In all, there were 12 lead changes among nine drivers and nine cautions.