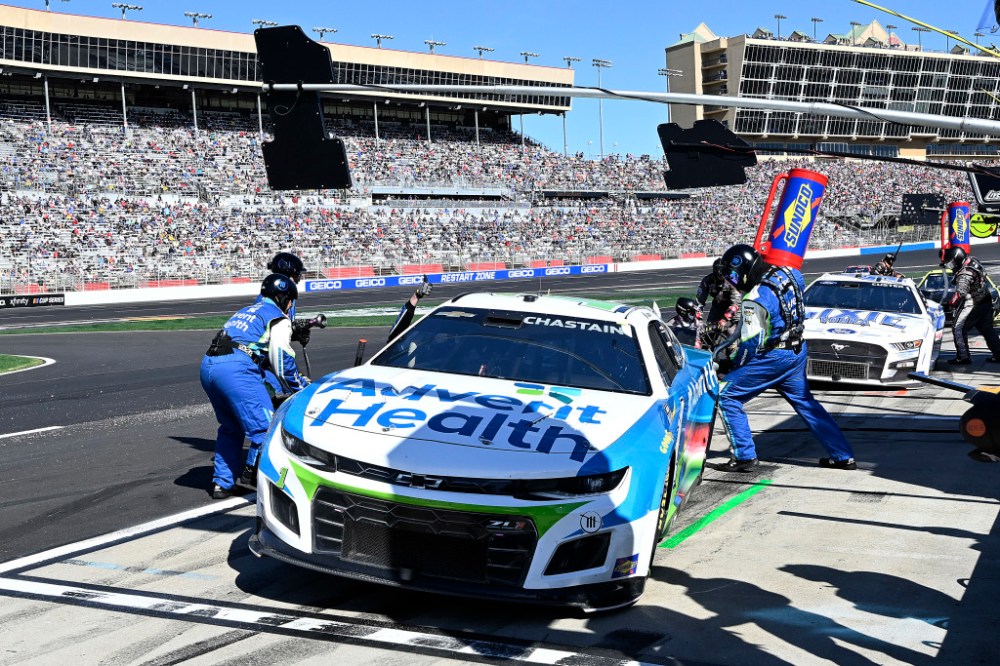 Ross Chastain was the driver making moves in the final two laps at Atlanta Motor Speedway but didn’t have the help to make the one move needed for the win.

“I needed Christopher to push me and not go below the line,” Chastain said after finishing second to William Byron in the Folds of Honor QuikTrip 500.

Chastain was fourth in line with two laps to go behind Byron, Bubba Wallace, and Ryan Blaney. He picked off Blaney coming to the white flag and then Wallace soon after. Off Turn 2 on the final lap, Chastain was in the position he wanted to be, but his chance evaporated.

“I backed up to (Bell) in (Turns) 1 and 2 and he just turned left under the line,” Chastain said. “I did not expect that. I didn’t leave him a lane; I knew that, and all of a sudden I felt him side drafting me and I looked over and he’s underneath me. I’m staring and a few feet off the line – there’s not enough room for a car.

Chastain was one of the big stories of the day with his comeback. The right rear tire blew on his Chevrolet as he led the race on lap 95, sending him into the outside wall and two laps down for improper fueling while on the clock for damaged vehicle repair.

“It exploded, and I heard it before I felt it,” Chastain said. “I initially thought it was a left rear but I didn’t want to overcorrect; I over-corrected at Auto Club, and I didn’t want to do that. But I still turned right. I just stayed in the throttle until I was into the wall, and then I got the wheel back left. We knocked the toe out a little bit. It must have been the front; the rear looked OK. But my toe was out a little bit. We adjusted that, it was still not great, but it was drivable.

“So, when I hit the wall, I thought our day was over, and I think any other race car I’ve ever driven…we would have been done and in the garage. I think it’s a testament to this car and Jim France’s vision. I know we give it a lot of flak, and I know we have a lot of griping about it, but there’s no other car that I’ve raced that I could have kept going.”

Before the incident, Chastain had led 42 laps. It was the second-most laps led by a driver Sunday afternoon.

A caution on lap 145 helped Chastain get one of his two laps back. Another caution on lap 157 put him back on the lead lap and he finished the second stage in the 10th position.

“Our day could have very easily have been last – we could have been the 37th place car,” Chastain said. “But we made it. We put ourselves back in position and got both of our laps back after our penalty on pit road. We got it back and were calm. We didn’t race for a while; We rode around, and then when we decided we wanted to race, we had the speed. We keep bringing these fast Chevys.

“I’m living my dream, so I can’t imagine it getting any better. But seeing the checkered flag right there and to see William have that win…like, we’re close.”