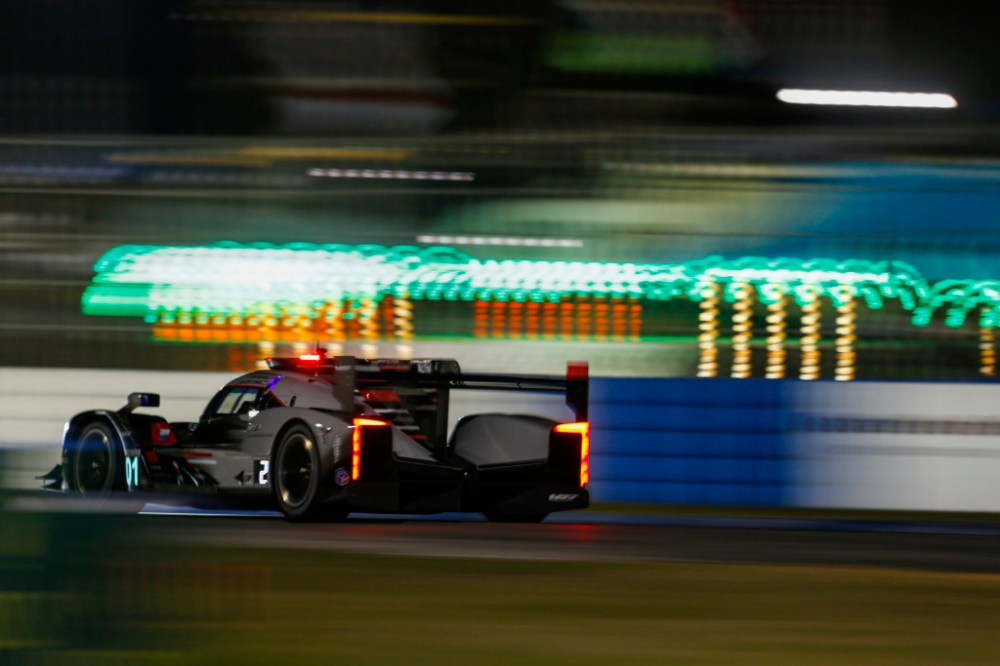 In Thursday’s all-important night practice session for the Mobil 1 Twelve Hours of Sebring Presented by Advance Auto Parts, the second round of the IMSA WeatherTech SportsCar Championship, it was all Cadillac and all Chip Ganassi Racing at the front of the DPi field, with Sebastien Bourdais posting the quickest time in the No. 01 Chip Ganassi Racing Cadillac he’s sharing with Renger van der Zande and Ryan Hunter-Reay.

Bourdais anchored the JDC-Miller Cadillac to victory last year, so he’s well aware of how critical having a good car for the nighttime is. At the Rolex 24 at Daytona, it’s all about surviving the night to begin racing in earnest on Sunday morning; at Sebring, it’s about hanging on during the day to race to the finish after the sun sets.

“The race is won at night,” said Tristan Nunez, whose co-driver Pipo Derani was third quickest in the No. 31 Action Express Racing Cadillac, putting up a 1m46.793s to Bourdais’ 1m46.180s. “Honestly, we’ve been really focusing on the setup as well, just to make sure that the car is good at night. The temperature during the day is going to be insanely different than what it is right now. So it doesn’t make any sense to try to set up a car based off what the day is going to be like. This is what it’s all about – just getting the car dialed in for the for the night.”

Earl Bamber was second in the session with a 1m46.546s lap in the No.02 CGR Cadillac. Tom Blomqvist was the fastest of the Acura drivers, fourth in the No. 60 Meyer Shank Racing with Curb-Agajanian ARX-05.

Scott Huffaker put the No. 52 PR1 Mathiasen Motorsports ORECA once again at the top of LMP2 at 1m48.842s. The top three in LMP2 looked very familiar, as the No. 29 Racing Team Nederland ORECA was second in the hands of Giede van der Garde, followed by Sebastian Montoya in the No. 81 DragonSpeed ORECA. The No. 8 Tower Motorsport entry that had been toward the front in the earlier sessions did not emerge during the night practice.

The No. 33 Sean Creech Motorsport Ligier was at the top of LMP3 for the first time, Malthe Jakobsen putting up a 1m56.878s lap. Felipe Fraga was second in the No. 74 Riley Motorsports Ligier, less than 0.1s back, followed by Colin Braun in the No. 54 CORE Autosport Ligier.

For the first time today a GTD car was quickest of the GT field, Toni Vilander bagging the only two-minute-flat time with a 2m00.962s lap in the No. 21 AF Corse Ferrari.

“This session is important for that aspect, not to go crazy during the day with this setup, and confirm what you have here,” said Vilander who, with co-driver Simon Mann, is also racing in the WEC 1000 Miles of Sebring. “Sebring is always spectacular in nighttime. The prototypes are aggressive, as always. There are a lot of cars, 53 cars, so it will be a really, really tough race.”

Bill Auberlen was second in GTD with the No. 96 Turner Motorsports BMW M4, almost 0.5s back, with Madison Snow only 0.04s short of Auberlen in the No. 1 Paul Miller Racing BMW. The top three GTD cars were quicker than the fastest GTD Pro car.

That honor went to Daniel Serra in the No. 62 Risi Competizione Ferrari, which has been near the top of the time sheets all day. Serra had a 2m01.569s lap to beat Mirko Bortolotti in the No. 63 TR3 Racing Lamborghini Huracan and Philipp Eng in the No. 24 BMW Team RLL M4.

The session was interrupted by one red flag for Katherine Legge, who crashed the No. 99 Hardpoint Porsche 911 GT3R in Turn 17. As always, Turn 17 has seen a lot of action as cars lose traction over the bumps.

Next up is a short, 15-minute practice session at 8:55 a.m. E.T. on Friday morning, essentially a warmup for qualifying, which starts at 9:20 a.m. Those will be the last WeatherTech SportsCar Championship sessions until Saturday morning warmup, as the circuit is turned over to the World Endurance Championship for its season-opening race, scheduled for a green flag at 11:55 a.m.