CRANDALL: Do dirt right or stop doing it

Kyle Busch won for the 60th time in his NASCAR Cup Series career Sunday night on the dirt at Bristol Motor Speedway. It was a win that should send Busch to the postseason and gets him on the scoreboard when it comes to early victors in the Next Gen race car.

All these are great reasons for Busch to celebrate. And yet, the fact he and his Cup Series rivals were racing on dirt at all still had him perturbed.

Asked about the event compared to one year ago when NASCAR ran it for the first time, Busch did give kudos for the track being in better condition. After getting through the first few laps where mud was an issue, the racing seemed to improve and visibility problems weren’t the main topic of conversation.

Those were the positives. Busch then brought up the other side of the conversation.

“The biggest thing that hinders me from enjoying this is just the application,” he said. “We’re trying to do something that isn’t applicable, in my opinion. The first 10 laps of the race, everybody is shooting mud off; we’re covering everybody’s grilles. Our windshields are covered with the dirt going off the windshields, stuff like that.

“When you’re in a dirt car — I’ve run micros, dirt late models, a few different types of vehicles on dirt. When there’s grip, it’s grip and rip. You are driving the heck out of that thing. It makes you breathe hard. This thing here, you’re just not breathing because you’re so tensed-up (about) not crashing. It’s just the application. If it’s a good show, it’s a good show. I think Bristol is fine with or without.” 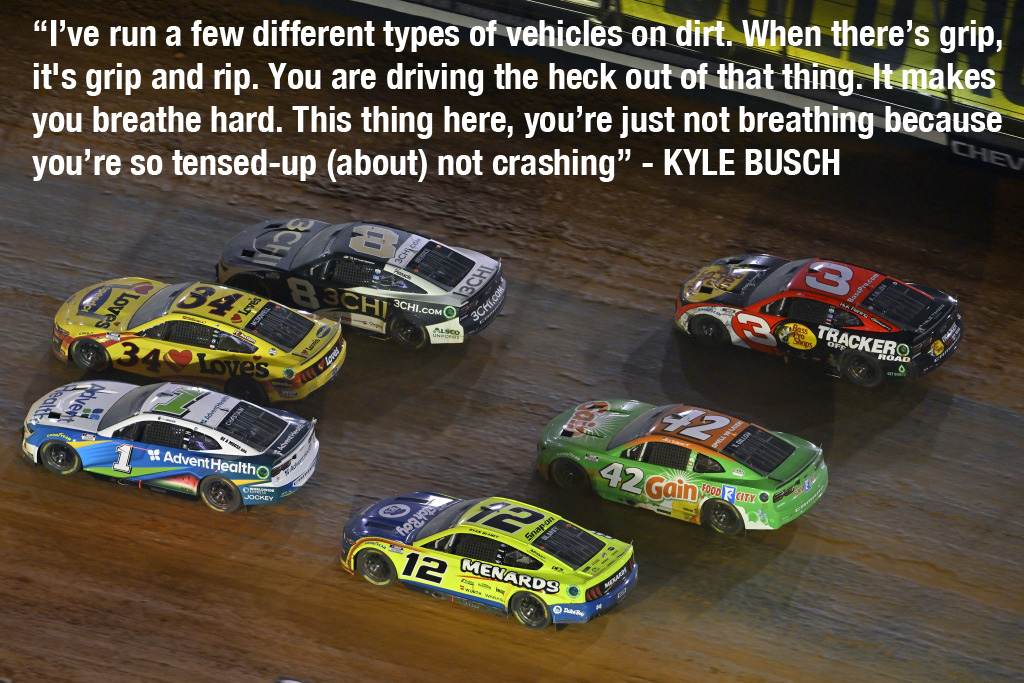 Bristol is a fantastic short track. Two years in, it still hurts seeing one of its races turned into something else.

And two years in, there are plenty of reasons why it should be abandoned. Cup cars aren’t suited for dirt. The race should be run on a legitimate dirt track. Track conditions two years straight have been a big issue.

The racing Sunday night — once the early mud bath was done from the track being overwatered before the green flag — was better than last season. NASCAR officials didn’t have to call for single file restarts because of visibility issues, the track wasn’t a big dust bowl and thankfully, the groove widened out to allow for side-by-side racing.

“I had a blast,” Chase Briscoe said. “The track was way, way better. I don’t know how much the rain helped that, but the banking — everything — was awesome. I thought there at the end, you couldn’t put on a better race from a dirt track standpoint in these cars, so hopefully that sold more tickets for next year and gives it an opportunity to come back because if we keep doing this at night, I think the opportunity to put on a good race is there.”

One of the most prolific dirt racers of this generation, Kyle Larson, admitted to having fun. Yet his overall opinion on the event is not what many might think.

“I think everybody assumes my opinion would be to race dirt every weekend, but no, I don’t think Cup cars should be on dirt,” he said. “That’s the only change I would make is not race on dirt.”

Busch and Larson’s comments were tame compared to Kevin Harvick, who continues to make it known he isn’t a fan of the event. Harvick exited Sunday night’s race early and gave pointed remarks about track conditions and how it’s “ridiculous” he finds the concept to be.

It’s a race weekend some like and others don’t. That’s no different from any of the other 35 point-paying races on the schedule. However, if NASCAR and Speedway Motorsports are committed to covering Bristol in dirt each spring, things still need improving.

Drivers continue to be outspoken about what can be done to the cars to help the product, starting with the windshields. It comes down to the simple concept of visibility, and even when track conditions were OK, the on-again, off-again rain caused an issue of the dirt on the windshield turning to mud. It also might have played into the glare drivers were seeing coming off the track surface the slicker it got.

NASCAR said it hadn’t had time to really study if taking the windshields out is possible. Except they’ve run Truck Series races on dirt since 2013 and had a year to think about the second edition of the Cup dirt race.

While safety is the easiest thing for NASCAR to point to why they haven’t taken the windshields out, and it’s well known they are always going to err on the side of safety, it is a concept that at least needs to be looked into. Seriously looked into, not tested a week before the event.

Then there is the matter of drivers continuing to claim they aren’t being consulted about dirt racing matters. One was Briscoe, who said over the weekend he wasn’t asked for input or feedback. Larson said the only time he’s talked to someone about it is when he’s been at the track.

Better preparation would lead to better execution on race weekend. The good news is that Sunday night showed it could be a good show, which is what the industry is after. But the self-inflicted issues need to stop if there is a third year.