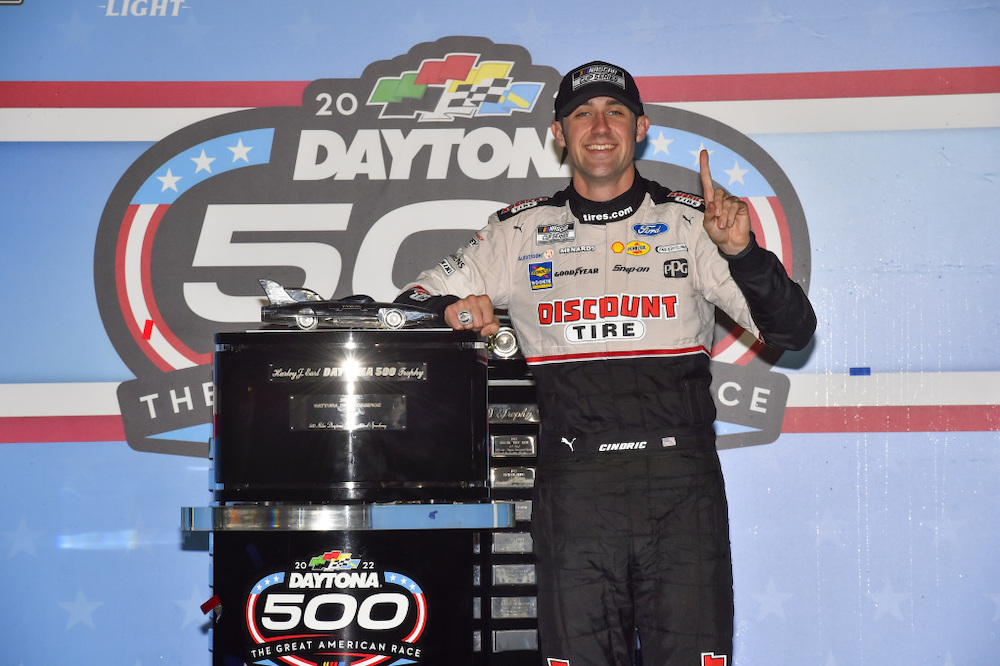 Austin Cindric is haunted by losing the Xfinity Series championship over three months ago every month of every day and expects that to continue. But after Sunday night at Daytona International Speedway, Cindric is OK with that.

“I’ll trade losing the Xfinity championship by 4 inches for a Daytona 500, I guess, any day,” he said.

In overtime to determine a race winner, Cindric led Team Penske teammate Ryan Blaney, Darrell Wallace Jr., and Brad Keselowski. When the race went green, and Cindric was pushed out front, he stayed there and fended off all challenges. His margin of victory was 0.03s.

In November, Cindric was leading on the last lap in the championship-deciding race at Phoenix Raceway when he was nudged out of the groove and beaten to the finish line by Daniel Hemric. The dejection was evident back then, but it’s something that Cindric made apparent even after winning the biggest race of his life that he still carries with him.

In his winner’s interview, Cindric revealed the pain from three months ago was so much he wanted to vomit. He’d never felt he let so many people down as he did then, and Cindric remembers waking up at 4 a.m. the following day like he was having a panic attack.

All Cindric cares about is racing. He has no outside hobbies, and admits to not having much social life. All of Cindric’s time and energy go into racing, spending time at the race shop and with his team.

Such passion and drive — along with Cindric’s talent — are what made it an easy choice for Roger Penske to put him in the No. 2 Ford when Brad Keselowski moved on. Every time Penske has asked Cindric to step up, whether it was his performance in the Xfinity Series to winning a championship or being a Cup driver, Cindric has made it happen.

“He’s been focused, he’s been a student of the game, is a smart young man,” Penske said. “I think he works with the team well. He’s in the shop all the time. And he’s a team player and he understands his position.

“Probably one of the tougher meetings I had with him was when we decided not to put him into Cup, had him run another year and then he won the championship, and he took it like a man — you could see that, as far as I was concerned. He said, ‘You make the call. I’m going to make it happen.’ That’s exactly what he did. He’s a mature man at his age, and there’s no question you could see his driving ability (Sunday).”

Cindric pulled off an impressive and unlikely feat by beating Darrell Wallace Jr. to the finish line in the Daytona 500 by 0.03s. Not only to score his first career NASCAR Cup Series win in his eighth start, Daytona 500 start, but doing so looking like a veteran on the biggest stage while holding off a teammate and some of the best in the business.

“I’ll be honest, I knew I had the car to do it, but there’s so many things that have to play out correctly in putting yourself in position,” Cindric said. “And I think we learned throughout the race with myself, my spotter and Jeremy as well, is doing the right strategy, the right calls and setting up the right lanes to be able to put ourselves in position. Sometimes that’s all you can hope for, and sometimes you have to force people to help you.

“I definitely didn’t expect any help throughout the day. I did get some from the Fords — I think Ford’s done an incredible job with this new car, and I think it’s obviously shown the first couple races. Just proud to be able to do it, proud to be able to hold off those runs at the end of the race. And it means the world to me to sit here and be able to say I’m a Daytona 500 winner.”