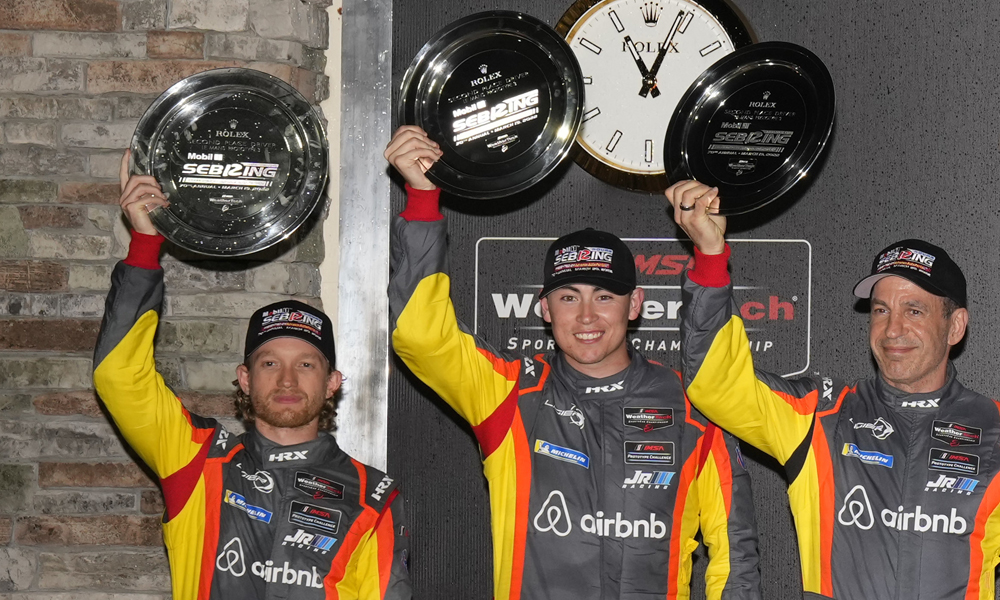 When IMSA introduced the LMP3 class into the WeatherTech SportsCar Championship, it was a multifaceted decision. The series’ LMP2 class was not flourishing as it had in Europe while costs were, as they always seem to be, rising. Allowing LMP3 machines into the WeatherTech Championship would provide teams with the opportunity to race the same chassis across multiple IMSA series.

Drivers are also looking to take advantage of the cross-platform play that is now available. Dakota Dickerson, the 2021 IMSA Prototype Challenge Series champion, made his WeatherTech Series debut in LMP3 at the Mobil 1 Twelve Hours of Sebring. Racing with Jr III Racing, Garett Grist, Dickerson and Ari Balogh (pictured left to right, above) finished second in class behind Sean Creech Motorsport’s Malthe Jakobsen, Joao Barbosa and Lance Willsey. It was the Jr III team’s second podium in the WeatherTech Championship after Petit Le Mans last year.

Dealing with multiclass traffic was one of the biggest challenges Dickerson  faced in his debut.

“You really had to be on your toes — the way the LMP3 cars race with the GTD cars, there are spots where we’ve got more speed than they do, and other places where they can pull away, so you have to be thinking several corners ahead,” he said. “And then of course you have the LMP2 and DPi guys coming through at full speed, so you are always keeping one eye out front and one behind you. It’s a lot to manage, but I loved it.”

Dickerson’s racing schedule beyond Sebring is still unknown but the 25-year-old has a number of prospective programs in the works, including more IMSA outings. Last year, he ran seven races in SRO’s GT World Challenge America Pro-Am Cup, winning two of them.

“I was really grateful that the team invited me to be a part of the line-up,” he noted. “Billy (Glavin, Jr III Racing team owner) has built an impressive program and the team did a fantastic job calling strategy, made great pit stops and really just did an awesome job all around. I’m really happy that we were able to get a podium and I think this is a really good place for Jr III to start the year for the championship.”

“It was a long race and everyone did a great job,” Dickerson said of Sebring. “I felt like I learned a lot and made improvements throughout my two stints. We kept the car clean, kept it on the lead lap and were able to make up a little ground as well. I’m very thankful for the opportunity that Jr III gave me.”