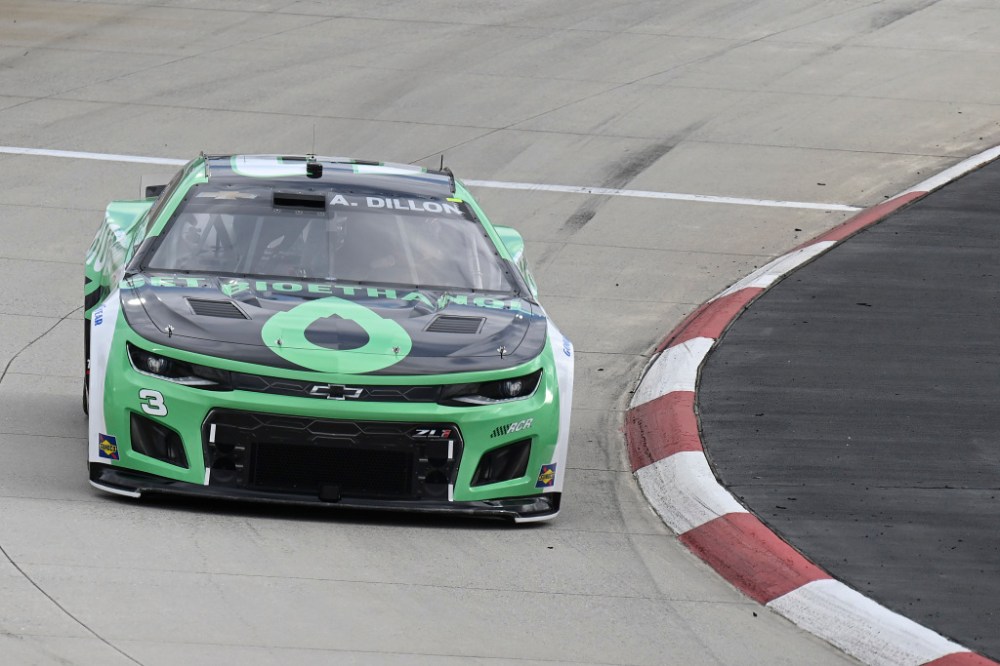 Austin Dillon owned that the No. 3 Richard Childress Racing team didn’t have a better shot at winning Saturday night at Martinsville Speedway.

Dillon, who ran second at the time of the final caution, restarted third in overtime, taking the inside lane behind leader William Byron. Dillon knew what he wanted to do going into Turn 1 but a mistake on the restart negated those plans.

“I was supposed to stay with Byron through the gears (and) I didn’t,” Dillon said. “I had to worry about the No. 45 . I was spinning the tires too much so I was kind of defensive through there. I picked up the gas in the middle of Turns 1 and 2, and I was able to get back in (line), but at that point, Joey was already tucked in line.

“I was hoping they would get together and I would have a run. I got to Joey’s back bumper off of (Turn) 4 but I gapped myself too much and wasn’t able to take advantage of that forward drive we had saved throughout that last run. I felt like we had a little bit left if I was able to get through the gears and I wasn’t able to.”

Dillon had a strong car through the long runs — a fortunate characteristic in his Chevrolet considering there were only two natural cautions. He also credited the work put in at the simulator and “wracking our brains” in meetings to try and figure out how to get more speed out of his cars.

“It sucks (to be) so close to having a shot at winning,” Dillon said. “I had it played out in my mind to get through the gears, get to Turn 1, and shove him up the track, and I minimized mistakes all night but I didn’t do a very good job on that last restart.”

Dillon started 23rd and seemed to refute the notion it was hard to pass.

“I had no problem passing; I came from 23rd a couple of different times coming to the front,” he said. “Yeah, it was difficult, but there was a ton of grip in the track. It’s freezing, the track’s fast; fast lap times. You’re averaging lap times close to qualifying there at the end when we were out front.

“When it gets hot and slick, it’ll be a whole other race and I’m actually looking forward to that because that’s where our car was probably going to be good — if it got hot.”

Dillon and company hope to be on a hot streak. Martinsville was his third consecutive top-10 finish.

“RCR and ECR — we’ve been pretty strong all year long and definitely gives us direction,” said Dillon. “We had a couple of unfortunate weeks getting wrecked at Phoenix and Atlanta so this feels really good to right the ship, but we’re here for one thing and that’s wins. Points (racing) is just so difficult to get your way in (to the playoffs). It feels good, like I said, but I wish I would have clutched it (on the restart). I like to think of myself as getting it done when I get those opportunities and I didn’t do it tonight. That will be on my mind.

“We’ve been — twice now this year; Fontana and here — second and in position to win and didn’t take advantage. That’s a big thing for us. Over the years at the Cup level, I haven’t had but…on average three, maybe four opportunities a year to do this (run up front). I think we’re (heading) in the right direction.”