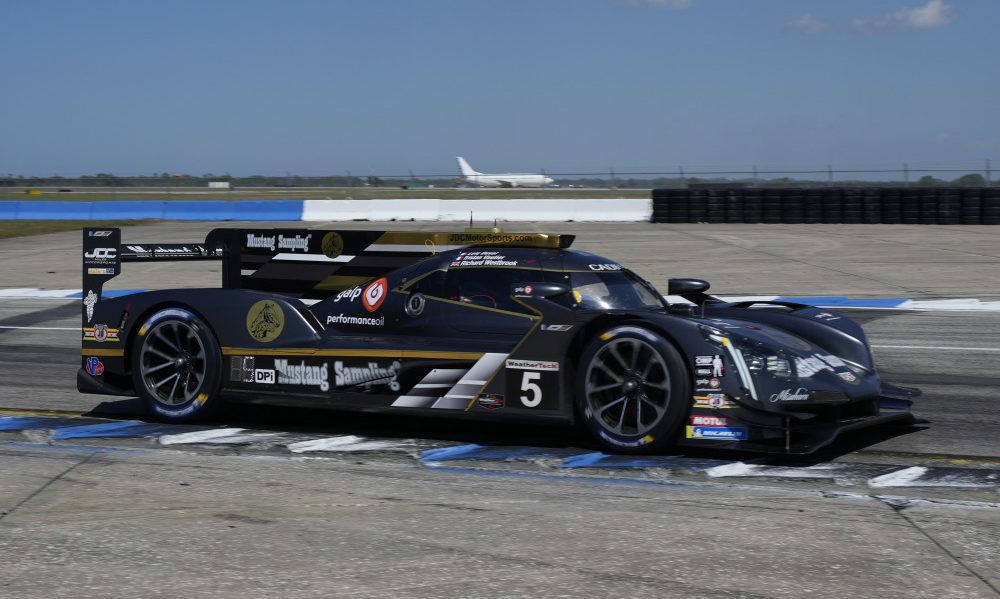 Loic Duval in the No.5 JDC-Miller Motorsports Cadillac was quickest in the morning warmup for today’s Mobil 1 Twelve Hours of Sebring Presented by Advance Auto Parts, turning a 1m47.508s lap that is likely representative of race pace.

Second and third were the two Action Express Racing Cadillacs piloted by drivers getting their first laps in the cars. The three WEC Toyota drivers, Kamui Kobayashi, Jose Maria Lopez and Mike Conway, had been prohibited from driving the AXR Cadillacs until after the 1000 Miles of Sebring yesterday, and used the warmup to good effect to get a feel for the cars. Kobayashi was second-quick in the warmup in the No.48, followed by Conway in the No.31.

Conway’s father, Michael, passed away on Thursday, but he stayed to race in his honor. Both AXR Cadillacs are carrying special decals in memoriam.

Giedo van der Garde in the No.29 Racing Team Nederland ORECA topped LMP2 with 1m52.468, while Joao Barbosa was quickest of the LMP3 entries in the No. 33 Sean Creech Motorsport Ligier.

Antonio Fuoco in the No.47 Cetilar Racing Ferrari 488 turned the fastest time of all the GTD cars with a 2m01.323s lap. Jules Gounon was just behind with a 2m01.500s lap to top GTD Pro, followed by Mirko Bortolotti in the No.63 TR3 Racing Lamborghini Huracan and Daniel Serra in the pole-sitting Risi Competizione Ferrari 488.

Richard Heistand in the No.12 VasserSullivan Lexus RC F was second-quick in GTD, with Stevan McAleer in the No.32 Gilbert Korthoff Motorsports Mercedes-AMG.

Yesterday’s WEC 1000 Miles of Sebring was halted, and eventually terminated, by nearby lightning strikes, and the skies opened up with heavy rain at about 7:45 p.m. Today’s forecast is very similar to yesterday’s – mostly dry but with a chance for thunderstorms developing in the afternoon.

The No.57 Winward Racing Mercedes-AMG that qualified third in GTD by Russel Ward failed post-qualifying tech due to a ride height infraction and will start from the back.

The No.99 Team Hardpoint Porsche 911 GT3R backup car was successfully built up from a spare chassis after Katherine Legge’s Thursday night crash. The team participated in the morning warmup, with Legge putting in some solid laps and bagging the fifth-quickest time in GTD.

Jose Maria Lopez had a frightening crash in yesterday’s WEC 1000 Miles of Sebring from which he emerged unscathed and is cleared to race today in the No. 48 Action Express Racing Cadillac.

Lopez, driving the No. 7 Toyota Gazoo Racing GR010 Hybrid, tangled with Julian Andlauer in the Dempsey Proton Porsche, causing the Toyota to spin and make contact with a tire wall. While trying to get his injured car back to the pits, he lost steering and sailed off the course again into a tire barrier, making heavy impact and rolling the Toyota on its roof.

The crash triggered a g-force warning which necessitated a trip to the medical center, but Lopez was released and participated in the morning warmup.