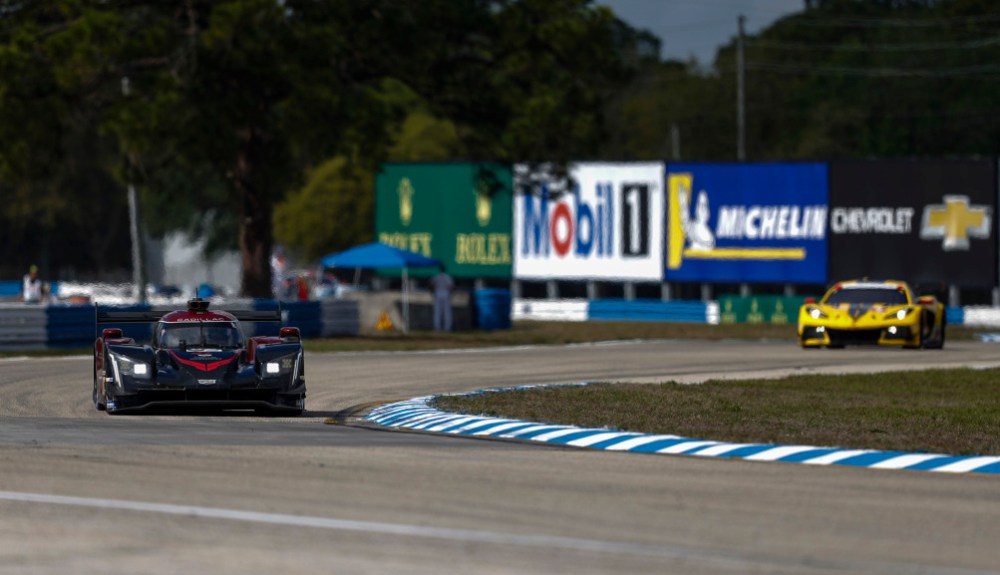 Despite their best efforts to throw it away in the final hour. The No. 02 Chip Ganassi Racing Cadillac of Alex Lynn, Earl Bamber and Neel Jani claimed the 70th Mobil 1 Twelve Hours of Sebring presented by Advance Auto Parts — the second round of the IMSA WeatherTech SportsCar Championship — to lead a Cadillac 1-2-3 in a race that set a new DPi distance record of 351 laps for the 12-hour race. The No. 5 JDC-Miller Motorsports Cadillac of Richard Westbrook, Tristan Vautier and Loic Duval finished second, 6.471s behind, and the No. 31 Action Express Racing Cadillac of Pipo Derani, Tristan Nunez and Mike Conway was third, another 8.145s in arrears.

It was a double victory for General Motors, as Jordan Taylor, Antonio Garcia and Nicky Catsburg won GTD Pro handily in the No. 3 Corvette.

The No. 02 Cadillac hadn’t really looked like a contender until the closing hours, and Lynn in his final stints began to stretch out a lead, even while saving fuel, so that they knew the could make it on one more stop once Lynn pitted and handed over to Bamber. But then Bamber clipped an LMP3 car on his out lap and spun, handing the lead to Westbrook in the No. 5.

Bamber then began chasing down Westbrook, but it was still anybody’s race. Bamber could use the fuel Lynn saved to do close the gap to Westbrook, and he did, taking the lead with just less than an hour left. But seconds later, while passing the 21 AF Corse Ferrari that was running second in GTD, Bamber made contact, spun and Westbrook was back through. Bamber gave chase again with a six-second deficit he set about erasing.

At the same time, Tristan Nunez turned up the wick, dropping into the 1m48s range to try to bring the No. 31 Action Express Racing Cadillac into contention.

With 45 minutes left and the final pit stops coming up, Westbrook was held up by a GT car, and Bamber, acting with decisiveness and using another GT car as a pick, once again took the lead.

The No. 02 held the lead after the final stop, over the No. 5 with Tristan Vautier now at the wheel. After the final round of stops, where all the contenders took fresh tires, the top five were covered by 25 seconds, and with the exception of the gap between first and second, most of the gaps were shrinking. Tom Blomqvist and Ricky Taylor battled for fourth in the final 25 minutes, but that fight fell to Taylor in the No. 10 Wayne Taylor Racing Acura, and the order was essentially set.

Corvette Racing appeared to be in control in GTD Pro, with the biggest fight for most of the race coming from the No. 24 BMW Team RLL M4 GT3 of Philipp Eng, Marco Wittman and Nick Yelloly, but that car experienced some issues toward the end, leaving the No. 63 TR3 Racing Lamborghini of Marco Mapelli, Andrea Caldarelli and Mirko Bortolotti to try to chase them down. The gap closed to 4.438s at the finish, but there was never any real challenge. Jules Gounon in the No. 97 WeatherTech Racing Mercedes AMG GT3 drove past a slowing Aaron Telitz in the No. 14 Vasser Sullivan Lexus RC F GT3 to take third with Maro Engel and Cooper MacNeil.

It would have been easy to count out he No. 47 Cetilar Racing Ferrari in GTD. The car was involved in multiple incidents throughout the race and was far from the same color scheme it started the race with. But in the closing laps, with the up-to-then juggernaut of the Turner Motorsport BMW fading, Antonio Fuoco swept into the lead that he held to the end, sharing the win with Giorgio Sernagiotto and Roberto Lacorte.

The Turner BMW had plenty of speed until late in the race and, as Bill Auberlen put it, they kept strategizing their way into the lead. But Auberlen knew two hours before the race was over that they likely wouldn’t be able to maintain the lead with the car experiencing an undiagnosed issue. The team fell off the podium completely when they had to make an extra stop to put Robby Foley back into the car because it appeared Auberlen was going to go over his maximum drive time.

Ben Keating put the No. 52 PR1 Mathiasen Motorsports ORECA on pole in LMP2, and he, Mikkel Jensen and Scott Huffaker mostly dominated the race, finishing a lap ahead of the No. 29 Racing Team Nederland ORECA of Fritz Van Eerd, Giedo van Der Garde and Dylan Murry. Ryan Dalziel, Kyle Tilley and Dwight Merman were third in the No. 18 Era Motorsport ORECA.

Malthe Jakobsen had a handy lead in LMP3 driving the No. 33 Sean Creech Motorsport he shared with Joao Barbosa and Lance Willsey, but that didn’t stop him from setting the fastest lap of the race in the closing stages to put more distance between the second-place Jr III Racing Ligier of Garett Grist, Ari Balogh and Dakota Dickerson. The No. 38 Performance Tech Motorsports Ligier of Dan Goldburg, Rasmus Lindh and Cameron Shields was third.