Gibbs muscles past teammate Nemecheck to win Xfinity at Richmond 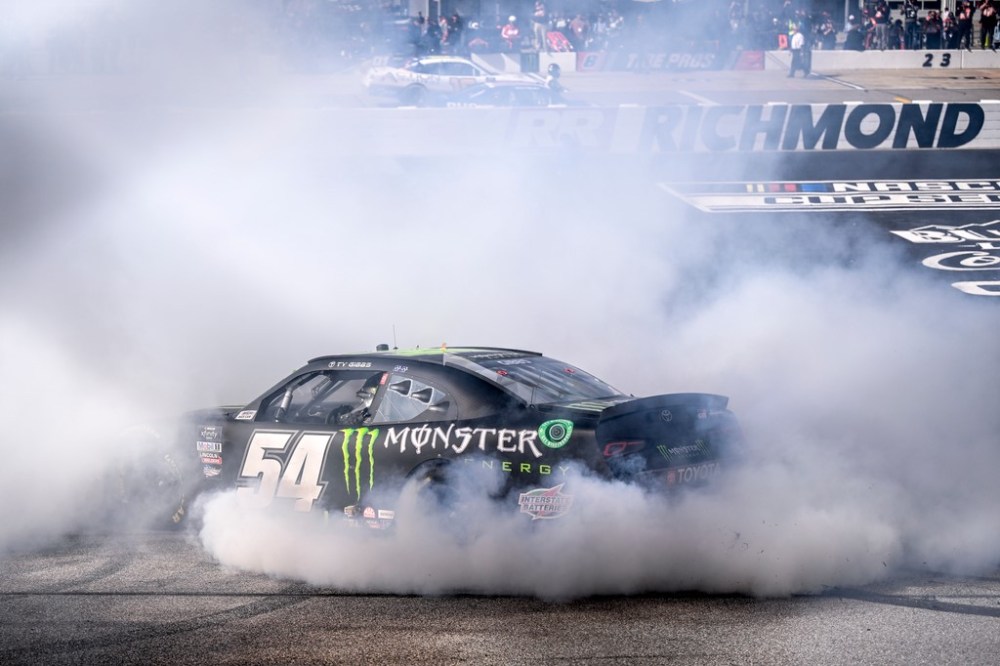 Ty Gibbs bumped his Joe Gibbs Racing teammate John Hunter Nemechek out of the lead on the final lap to claim his third NASCAR Xfinity Series race win of the season – by a mere .116-seconds over Nemechek in the ToyotaCare 250 at Richmond Raceway.

The two JGR drivers dominated the afternoon – combining to lead all but one of the 250 laps on the .075-mile track – the first short track test of the season. Nemechek paced the field for a race high 135 laps in the No. 18 JGR Toyota and was within checkered flag sight when Gibbs got into him, pushing Nemechek’s Toyota high up the track and then motoring on for his series best third win of the season and seventh of his young career.

In his previous two victories (at Las Vegas and at Atlanta) this season, the 19-year-old Gibbs led only 14 total laps. He was out front 115 on Saturday.

“I definitely deserve one back but we’re racing for wins and they are hard to come by so you have to take it,” said Gibbs, after climbing out of his No. 54 JGR Toyota.

“Short track racing,” he added with a smile. “Got our third win so want to keep it going. What a great car.”

“I deserve one back for sure but we’re racing for wins and I’ve got to do what I can to win.”

The second-generation driver Nemechek, who races full-time in the NASCAR Camping World Truck Series, climbed out of his car and offered a smile to the television cameras, but the 23-year-old was clearly miffed at his teammate.

“Him and I will settle it one day,” Nemechek said. “I don’t want to say too much and get myself in trouble. Just got drove through. He didn’t even try and make the corner there.

“But racers never forget, that’s for sure.”

It was a career day for another teenager as well. Not only did 18-year-old JR Motorsports driver Sam Mayer earn a career-best third place finish, but he also secured the $100,000 Dash 4 Cash incentive prize offered by series sponsor Xfinity.

“By the end of the day our Chevrolet Camaro was as fast as Xfinity internet, so that’s a really good, feel-good-moment for us and obviously my career-best finish,” Mayer said. “Unbelievable. This team definitely deserves it.”

Now the top four eligible drivers from Saturday’s race in Richmond – Mayer, race winner Gibbs, fourth place finisher A.J. Allmendinger and fifth-place finisher Riley Herbst will have an opportunity to contend for the prize money next weekend at Martinsville Speedway.

Although he won’t be eligible for bonus money, reigning series champion Daniel Hemric had to be happy with his results on Saturday. Hemric rallied from the rear of the starting grid to finish sixth, followed by Josh Berry, Brandon Brown, Ryan Sieg and Parker Retzlaff.

Noah Gragson came into the weekend leading the points standings, but his No. 9 JR Motorsports Chevrolet suffered brake problems all afternoon and ultimately finished 21st and one lap down. The misfortune cost him the championship lead. Allmendinger, the only driver to have Top-10 finishes in all seven races this year, now leads Gibbs and Gragson atop the standings by 20 points.

The NASCAR Xfinity Series races next on Friday night in the Call 811 Before You Dig 250 (7:30 p.m. ET, FS1, MRN, SiriusXM NASCAR Radio). Berry is the defending winner, earning his first career series victory there in 2021.