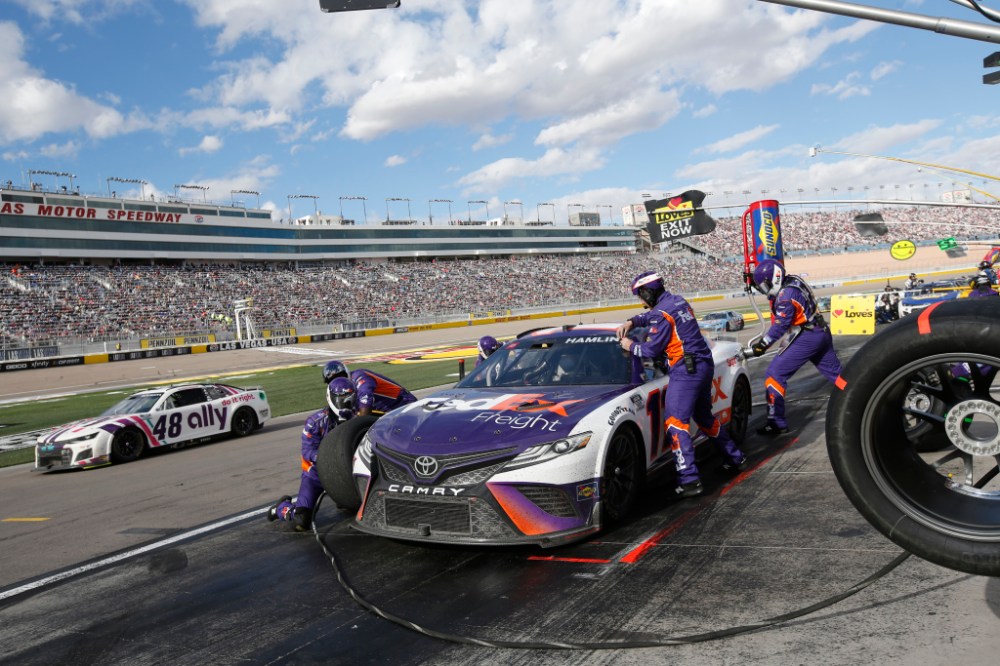 While it might look like Denny Hamlin is struggling to get out of the gate early this season, the Joe Gibbs Racing driver and his group has their blinders on.

“Honestly, we haven’t even talked about it as a team — about points or anything like that,” Hamlin said after qualifying second at Phoenix Raceway. “I mentioned before the season started that I think everyone’s average finish is going to go down three or four points in general, just because I think there will be more mechanical failures, more wrecks, things like that.”

Hamlin has been bitten by a little bit of everything thus far. Caught in a crash in the Daytona 500, Hamlin went to Fontana, where he had a speeding penalty and experienced the same overheating problems many of his Toyota teammates did. Last weekend in Las Vegas, things started well enough as Hamlin led 31 laps, but a shifting mistake when leaving pit road broke the transaxle.

Entering the final race of the West Coast swing at Phoenix, Hamlin sits 29th in the standings. His best finish is 15th at Fontana, and the DNFs from Daytona and Las Vegas came with results of 37th place and 32nd place.

For as bad as it sounds, Hamlin believes the variable of a first-year race car will aid in a turnaround. If there are going to be the mistakes made that Hamlin anticipates, that means there will be chances to capitalize on the misfortune of his rivals.

“I think it’ll be easier to come out of a hole this year simply because as we’ve seen, everyone has had trouble, where it seemed like we were so honed in on the old car that my average finish just kept dropping every single year lower and lower,” said Hamlin. “I think you have a year where you can be 10th or 11th (on average), you’re going to be up front — as long as you get reasonable stage points — and you’re going to be contending for a regular-season championship.

“We’re not panicked simply because we have had some bad luck. Obviously, Daytona was not our doing. Last week was my doing. But I’m confident. I’m really actually happy where our team is and where it is progressing week to week.”

Hamlin starts on the front row at Phoenix, where he has two wins. It is Hamlin’s best qualifying effort of the season.

“This is an important race,” Hamlin said. “Even though it’s certainly early in the season, it’s still kind of the first real short track we are going to. It’s going to create a big data point that we can go to when we start setting up our cars for other racetracks. So, it’s very, very important. A good solid day this weekend certainly would help us believe and give us confidence that we’re going to be good pretty much at all the racetracks.

“I thought at Las Vegas we had one of the best, if not the best car and that’s a mile-and-a-half. We’ve got a boatload of them. We’ve got a lot of short tracks; if we can be good here, then I like our outlook for the whole year.”