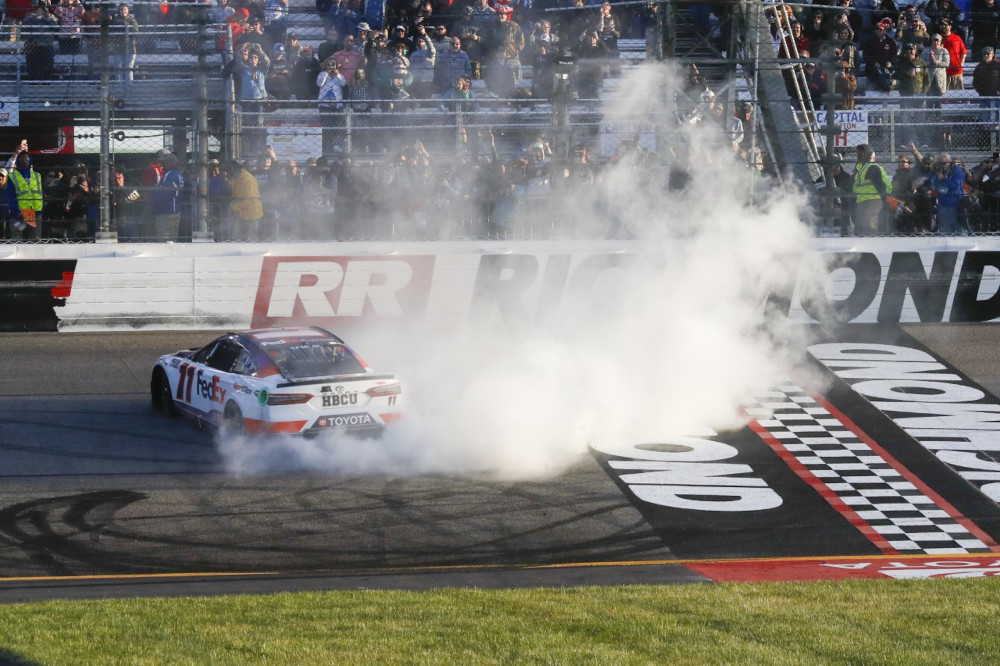 Perhaps there was no better place for Denny Hamlin to finally notch his first win of 2022. Much to the pleasure of the fans at Richmond Raceway, the hometown favorite from Chesterfield, Virginia took the lead of the Toyota Owners 400 from William Byron with five laps remaining and held off the field for a .552-second victory over Kevin Harvick and Byron.

It was amazingly Hamlin’s first top 10 of the 2022 season, though it marked his fourth NASCAR Cup Series victory at the 0.75-mile track – the very place the driver of the No. 11 Joe Gibbs Racing Toyota grew up watching NASCAR as a young fan.

It is the sixth win for the JGR Toyota team in the last eight races at the Richmond track – 18thin the team’s history there. And it is the third consecutive race there that all four JGR drivers finished in the top 10.

The victory was also significant in that the 41-year old Hamlin stopped a 12-race victory run by drivers 30-year old or younger – a mark dating back to last season.

“Just drove as hard as I could,” said Hamlin, a perennial championship contender who had been ranked an uncharacteristic 20th in the standings before the Richmond race.

“So proud of this whole FedEx Camry team, they just never gave up.

“There was no doubt in my mind — maybe just a little — but they got this car right there towards the end,” Hamlin continued. “Wow this is just unbelievable.”

“We needed a data point — something — a good run to kind of balance ourselves on other tracks. Obviously, I think we got it here.”

Byron and his No. 24 Hendrick Motorsports Chevrolet team opted to stay out on older tires for the last 90 laps and at one point held a strong five-second lead on the field. But as the teams opted for fresher tires during a series of late race green flag pit stops, it became apparent that Byron would have to really work for the win – and do so on worn tires.

Ultimately, Hamlin, who got new tires with 47 laps to go, was able to dice his way through the field, taking the runner-up spot from his JGR teammate Martin Truex Jr. with six to go and continue moving forward to dive low and move into the lead around Byron with five laps remaining. Also on fresher tires, Harvick was able to pass both Byron and Truex to take his best finish of the season as well.

“Really, it’s the first clean day we’ve had all year,” said the 2014 series champion Harvick. “The cars have been fast and we had a shot there at the end. Just…I wanted to be close enough at the white to just take a swipe at him but the lapped cars got in the way and I lost a little bit of ground. Still a great day for us and hopefully a little bit of momentum.”

JGR driver Christopher Bell was sixth, followed by Penske Racing’s Ryan Blaney, the polesitter who led the first 128 laps of the race – the most on the day. Hendrick Motorsports’ Alex Bowman recovered from a pit road penalty to finish eighth. Kyle Busch recovered from a late race penalty as well to claim ninth place and Richard Childress Racing driver Austin Dillon was 10th.

Blaney (first) and Truex (second) each won a stage and are the only three-time stage winners so far this season.

Blaney and Elliott are now tied for the NASCAR Cup Series championship lead with a 19-point advantage on third place Truex.