Hamlin wants both 23XI cars in the playoffs 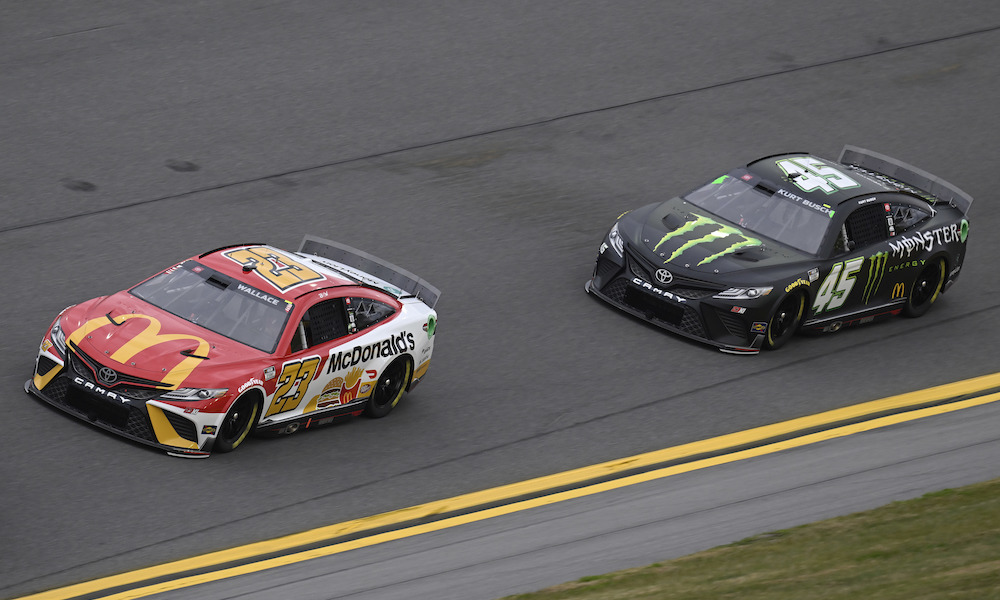 As 23XI Racing takes a step forward by expanding to two NASCAR Cup Series teams this season, co-owner Denny Hamlin expects the program to also take a step further on the track.

Hamlin believes the No. 23 team of Darrell Wallace Jr. and No. 45 team of Kurt Busch can make the playoffs. Wallace did win a race last year, the first for the organization, at Talladega Superspeedway, but he was not a part of the postseason. Newcomer Busch is quite familiar with postseason berths and is a former series champion.

“I do think it’s possible,” Hamlin said. “I think it is a goal for us to have both cars in the playoffs. I think Bubba isn’t far off from that; it’s one DNF away when you look at the standings of who is a contender to beat. I remember last year we were talking with two or three races to go (before the playoffs), and it was like, ‘we’re 30 points behind. That’s not that much.’ It’s not that much.

“You can gain a couple spots a week and on average change your average finish from 20th to 18th, and you’re there. It’s not that much, and you really won’t see that much, but yet you’ll see a big change in the standings. It’s just the way our sport works.”

Wallace finished 21st in the standings last season, which was a career-best. However, consistency remains his biggest hurdle.

“Obviously, we want to make the playoffs and compete for a championship; that’s a given. That’s what any driver is going to say,” said Wallace, who is entering his fifth full season at Cup level. “For us, it’s just (to) become consistent. We had a lot of finishes where we won Talladega and the Roval was next, and we were back and forth. So, smoothing out the graph on the results chart is important for us is important for us, and bringing that graph lower and better.

“It’s something we’re going to fight for each week. Be competitive, be more consistent, get that speed up there, figure out this new car. Everyone is figuring out the new car, but making sure we’re on the upper tier of those who figure it out first to have that advantage. It’s going to take a lot of hard work from myself and my team, but Bootie know that what we have to do is go out and win races and be the best that we can be. Some days we can show up and be a fifth-place car; some days, we might show up and be a 15th place car. We have to take what it gives us and make the most of those days.”

The addition of Busch is expected to push the 23XI organization forward in more ways than one. Toyota Racing president Dave Wilson is confident that Busch will show the same success he has in the past while his maturity and leadership off the track will lift the organization.

That includes having a positive influence on his new teammate. In team debriefs, Busch is helping Wallace wade through all the information and data thrown his way to understand what is good to know versus what Wallace really needs to dig into.

“Kurt’s fun,” said Wallace. “He has a lot of one-liners that he’ll throw out there and catch you off-guard. But it’s fun. It’s cool. When we’re in the heat of battle trying to figure out what it takes for our team to be successful, he’s providing a lot of insight and a new perspective of how to look at things at a different angle to make sure we’re crossing everything off the list. Now that we’re diving into the start of the season, we’re helpfully pushing each to be the best we can be.”

Busch, the 2004 series champion, expects to win races and contend for championships regardless of who he’s driving for. Busch has more playoff appearances (15) than Wallace does top-10 finishes (12) in the Cup Series.

“We’ve set our expectations very high and we have every ambition and every bit of focus and intensity to achieve those goals,” said Busch. “(That’s) winning races, both cars in the playoffs, and for us, making a run through the playoffs to have a shot at the final four. That’s what we want to do on the 45 car.”