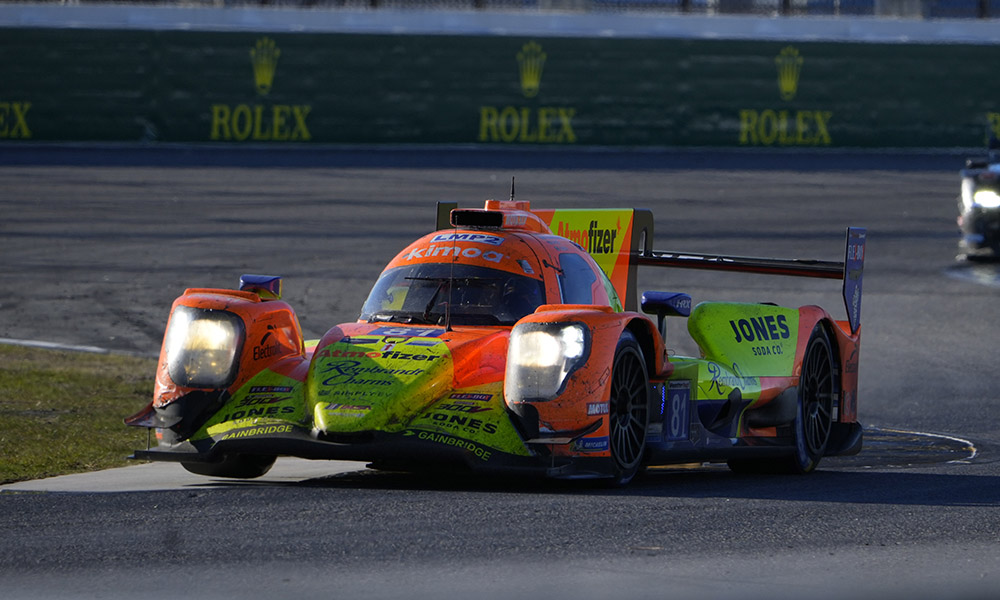 The DragonSpeed LMP2 squad of Eric Lux, Devlin Defrancesco, Pato O’Ward and Colton Herta looked to be out of the fight for the LMP2 win after going three laps down, largely thanks to pit lane violations for the No. 81 ORECA. But the cautions allowed them to get back on the lead lap in the late going, and speed put them out front of the No. 8 Tower Motorsport ORECA of John Farano, Louis Deletraz, Rui Pinto de Andrade before the final pit stops. But taking fuel only put the No. 8 in front, leaving Herta to make a dramatic late-race pass for victory.

“They didn’t take tires, I took tires,” Herta explained. So that’s kind of how they jumped up in the pits. And so I knew that I would have a little bit of a grip advantage, but it is quite difficult to get a run and pass in these cars, especially at the Bus Stop, you get a lot of aero wash. So I took a few tries and it didn’t happen until he got a little help from traffic and he backed off going into the bus stop to get a run in I was able to go to the inside of him.”

Herta dived inside, while Deletraz seemed to be caught off guard, started to turn in, realized Herta was there and jerked back the other way, taking a ride through the grass, but holding on to finished second. The No. 29 Racing Team Nederland of Frits van Eerd, Giedo van der Garde, Dylan Murry and Rinus Veekay ended up third. Pole-sitters Ben Keating, Mikkel Jensen, Scott Huffaker and Nicolas Lapierre in the No. 52 PR1 Mathiasen ORECA were fourth, on the same lap.

The Riley Motorsport LMP3 squad, Gar Robinson, Felipe Fraga, Kay van Berlo and Michael Cooper, making his first LMP3 and first Rolex 24 start, won LMP3 for the second year, although only Robinson was in the No. 74 Ligier last year. By the end of the race, they were the only LMP3 car on the lead lap, the second-place team of Joao Barbosa, Malthe Jakobbsen, Set Priaulx and Lance Willsey in the No. 33 Sean Creech Motorsport a lap down and the third-place No. 54 CORE Autosport Ligier of Jon Bennett, Colin Braun, George Kirts and Nic Jonsson another lap back.

“Bill Riley has a lot of experience running many different cars in this race and being very successful with it,” said Robinson. “So we went with kind of a conservative, old-school style endurance race where you had to take care your car, make sure it finished, stay on their lead lap and be very, very strict on making sure you never put a wheel wrong. And we did the exact same thing this year, but the difference in this year and last year was this felt like GTD was where it is a sprint race from the green flag to the checker for 24 hours. Every one of us had to push the entire time that we were in the car.”