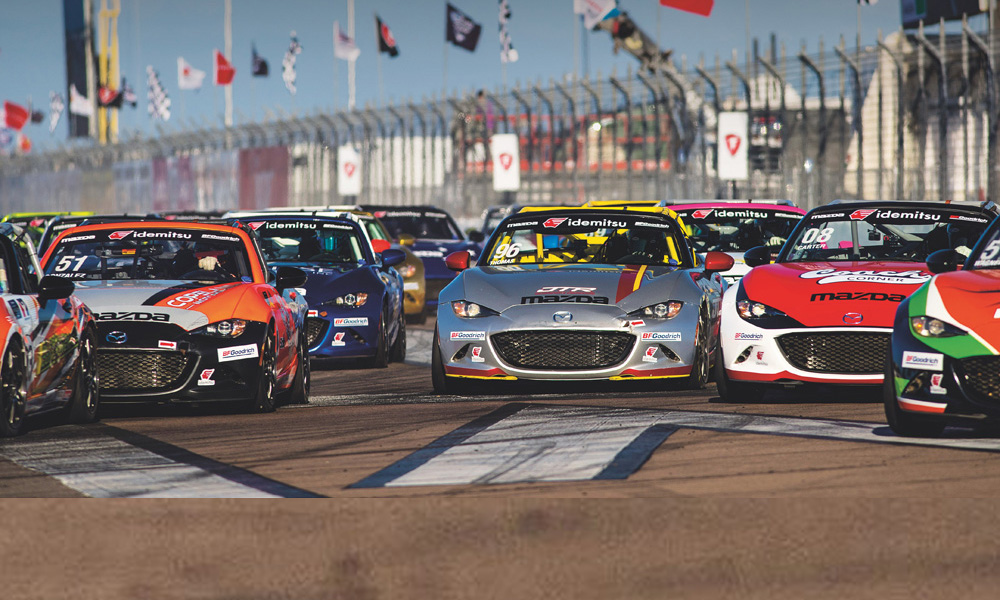 When it comes to building a multi-car race team from the ground up, there’s plenty of retired race car drivers or successful businesspersons from another field ready and willing to take on the sizeable challenge. But what about a 23-year old straight out of college who isn’t an heir to a fortune or the scion of a racing dynasty?

Less than two years into its existence, JTR Motorsports Engineering is a race-winning organization fielding five cars in the Idemitsu Mazda MX-5 Cup Presented by BFGoodrich. It’s the brainchild of Jared Thomas – the aforementioned 23-year-old college graduate – who also happens to be leading the 2022 MX-5 Cup standings after winning two of the opening four races.

“I went to college with the idea of getting an engineering job in IndyCar or IMSA,” says Thomas (No. 96, above), whose soft-spoken, laconic speech shows a maturity beyond his years. “I was running Spec-Miata in SCCA while I was getting my degree and got invited by Mazda to the Road to 24 Shootout in 2019. I won the Scholarship and that got me my first year of pro racing in MX-5 Cup in 2020.

“That year, I won the MX-5 Cup Rookie of the Year, which came with a $75,000 prize,” he explains. “I’d always done my own work on prepping the race cars, so I took all the prize money and used it as the startup for building my own organization.”

The 2021 season was the organization’s first, and the growth came thick and fast. Thomas took on prepping several cars, as well as running the trackside operation that also included driver coaching and engineering. For the opening race in Daytona, JTR fielded a car for Thomas and another for rookie Chris Nunes. By season’s end, there were five cars in the JTR stable. Nunes finished the season fourth overall and the team had racked up two race wins – one apiece for Nunes and Thomas.

“It grew really fast and now we’re one of the biggest teams in MX-5 Cup. It’s keeping me busy, but I love it,” says Thomas.

The growth continues at feverish pace. Thomas has completed the purchase of a new building to relocate the race shop. As well as himself, he has three full-time employees and two part-timers helping out.

“We’re trying to build for the future,” he says. “We have a new chassis dyno and a damper dyno, so we can do our own in-house RD. We try to provide the best for our customers so when we get to the track, everything is top-notch and there are no questions asked.”

Level-headed and humble, Thomas isn’t making any bold proclamations about the future of both his career and the trajectory of JTR Motorsports Engineering. He’s charting a course for climbing the sports car racing ladder one rung at a time, but given what he’s built in such a short amount of time, an old saying comes to mind: From small acorns do mighty oak trees grow.”

Two wins from four starts in the series’ Florida swing gave Thomas the early points lead, and they came at two very different race tracks. The first was on the 3.56-mile Daytona International Speedway road course, where drafting and top speed rule. The second, just 165 miles west on the I-4, came on the narrow, wall-lined confines of the 1.8-mile St. Petersburg street circuit.

“Daytona is a totally different game plan and philosophy to St. Pete,” says Thomas. “Daytona is 100-percent draft. It’s very difficult to get away and you’re always looking to pair up with someone you can trust, because it’s the only way you can push away from the pack.

“In St. Pete it’s just chaos. You never know what’s going to happen. It’s likely that there will be some cautions, but you never know when. So you just have to try and get to the front as soon as you can, because the rest is out of your control.

“The intensity is extremely high,” he adds. “You’re not only racing your competitors, but you’re also racing the St. Pete track. Being mistake free for 45 minutes is the key, but it doesn’t take much because there’s no room for error. Even a small bobble out of Turn 8 will knock a wheel out of toe and that’s your race. Even so, I love it because it’s a place where driver talent really comes through.”

The Idemitsu Mazda MX-5 Cup Presented by BFGoodrich is on a spring break before it resumes for Rounds Five and Six at Mid-Ohio Sports Car Course, May 13-15. All races are streamed live on RACER.com and archived on the RACER magazine YouTube channel . To view the full season schedule and learn more about the series visit www.mx-5cup.com.