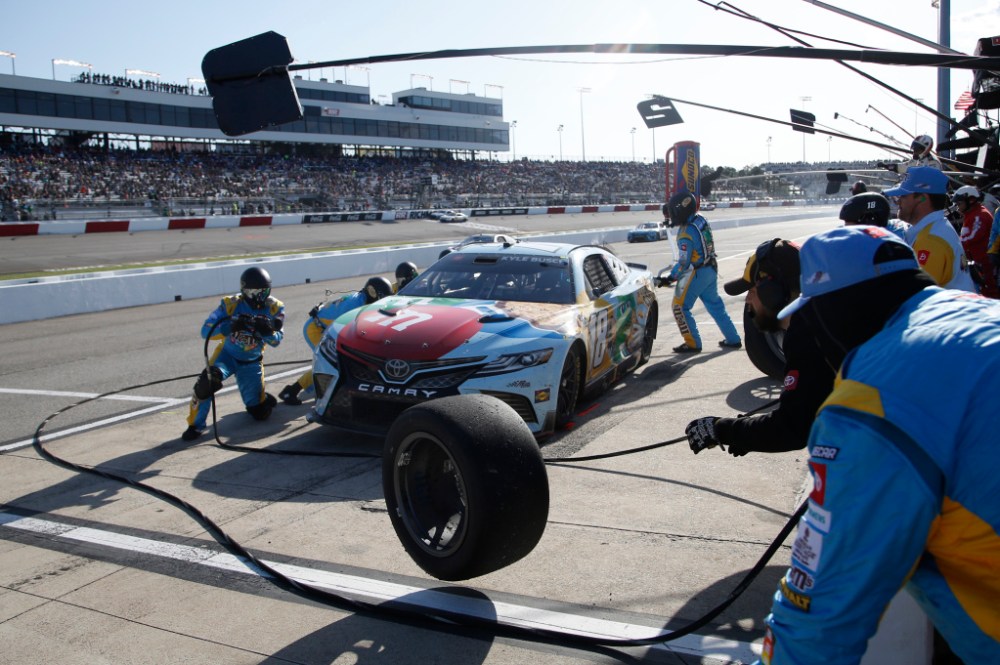 Cunningham, the rear tire changer on the No. 18 team for Kyle Busch, jumped in front of a race car for the first time. As part of the new choreography allowed on pit road where the rear tire changer is no longer required to go around the back of the car, Joe Gibbs Racing has been at the forefront of doing something new. It was something they practiced for over a year and then lobbied NASCAR officials to consider (even showing them firsthand at their shop).

NASCAR changed course, allowing teams to do away with the long-held tradition of how the pit crew went over the wall. It began two weeks ago at Atlanta, and Sunday at Richmond was the first time the Gibbs teams put it into action.

“Obviously, I was a little anxious that I’ve been changing tires (for) 17 years and have never jumped out in front of a car before, and in front of Kyle Busch at that,” Cunningham told RACER. “I’ve always been a rear guy.”

Adding to the drama was that as the sun was setting throughout the race (it was a 3:47 p.m. ET start time), Cunningham admitted it was hard to see who was coming down pit road.

And then Busch almost blew through his pit stall.

“So that’s the worst-case scenario for that stop on the very first one ever,” Cunningham said. “But I definitely got zeroed in after that first one.”

Cunningham and his teammates made the new look pit stop count. On lap 234, Busch’s pit crew clocked in a 9.1-second pit stop to go in the record books as the fastest four-tire stop ever recorded.

“We’ve got way more where that came from,” said Cunningham. “They weren’t even that clean of (pit) stops.”

Cunningham talked to some members of the competition after the race and “a lot of them say they have some work to do. So, we definitely put the rest of pit road on notice.”

The new choreography is optional, and not all teams chose to do something new, including in the Gibbs stable. Denny Hamlin’s No. 11 pit crew did on their final two pit stops of the day, and crew chief Chris Gabehart credited it with helping them win the race.

Chris Hall noted there were 12 pit stops in the nine-second bracket at Richmond, and Joe Gibbs Racing teams accounted for seven of them.

“I am so proud of all of our Joe Gibbs Racing pit crew athletes today,” Hall, the Joe Gibbs Racing director of player advancement, told RACER. “They performed at a high level even with the rest of the sport cheering against them. It showed true mental toughness, and I am very excited to see how fast we can do four-tire pit stops moving forward. I believe everyone else has some homework (to do).”

Joe Gibbs acknowledged how hard those in his organization have worked at adapting to something new, and he’s also eager to see where things go.

“I think it’ll be interesting because we had some of our guys with regular choreography and some with (the new one),” said Gibbs. “It’ll be a work in progress. We’ll analyze it and see what we think. That’s the fun thing about sports, is you get something new and a different way of doing something.”