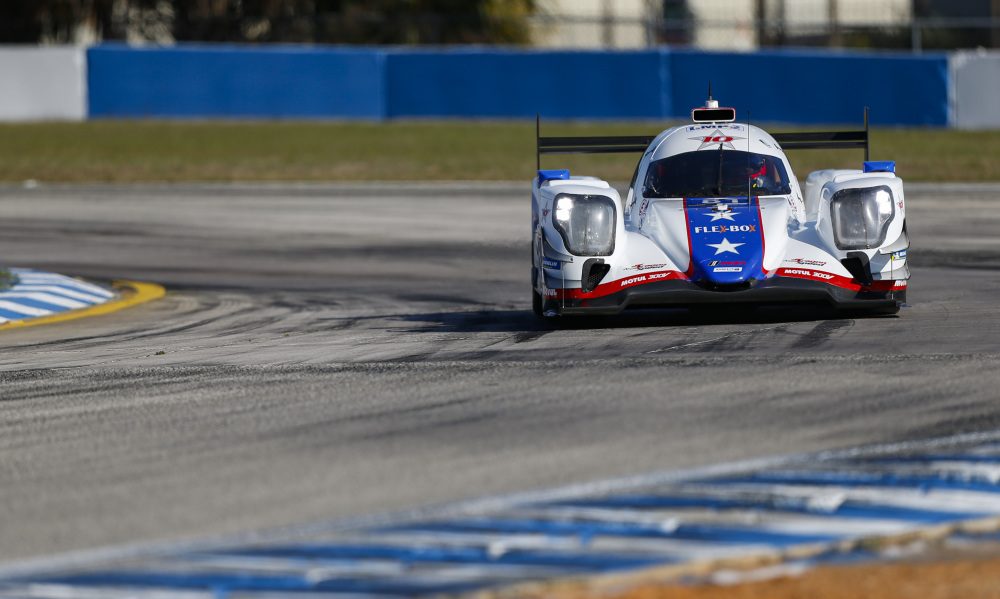 Neither DragonSpeed nor driver Juan Pablo Montoya, partnering with Henrik Hedman in the No.81 ORECA LMP2 car for the IMSA WeatherTech SportsCar Championship, are strangers to winning.

Observing during that Le Mans experience was Montoya’s son, Sebastian. Now 16-year-old Sebastian is the third driver in the DragonSpeed machine for the Mobil 1 Twelve Hours of Sebring Presented by Advance Auto Parts. The No.81 has been near the top of the time sheets for the duration, and often the name next to fastest lap was not JPM, but Sebastian.

“I think it’s amazing,” the proud father says. “Honestly, the opportunity that DragonSpeed and Henrik and everybody involved in the program gave us to share the car is an amazing opportunity. And I think it’s a lot of fun.

“I think is a great opportunity for him to to experience a race like this, especially in a prototype like this is really cool. So we’re really happy to be here. Of course, when you’re here it’s down to business and do the job. But we’ve talked about it a lot. We’ve worked on it a lot. And I think we’re in a really good place at the moment.”

Sebastian is trying his hand at a prototype in between Formula Regional championships, having come through karts before moving to Formula 4. He’s about to start the European Championship next month. He grew up watching his father win in almost everything, and now having the opportunity to race with him is special.

“It’s pretty cool,” Sebastian states. “Especially because I’ve always looked up to him. I’ve always been around the tracks helping him, being his shadow. Basically, looking at what he does, how he works, how the team works and understand what is needed to win, because he’s always been with a good, competitive teams.

“So having the opportunity to finally be part of it with such a special team – especially last year when they won Le Mans – it was great experience being there. Hopefully we can repeat history here.”

Despite his accomplishments in motorsport, Sebastian didn’t always see his father as a mentor, much like many kids don’t. JPM admits there was a phase where working with Sebastian was difficult, but eventually he came around.

“He knows a lot and he’s quick, so it helps a lot,” explains Sebastian. “It was very difficult at the beginning to get the relationship going because I didn’t see him as a coach or a driver, I saw him as my Dad. Sometimes he would say stuff and then I would get mad and then a whole fight would break out. Then I realized behind every message that he sends me there’s something special…”

“Yeah, straight to the point,” Sebastian laughs before continuing the thought. “Just understanding every message that he sends and the lesson behind it.”

Juan Pablo says one of the things that makes it work is leaving the father-son relationship at home. “When we’re at the racetrack, I’m more of a coach than a father and I tell him things the way they are. I don’t sweet-coat anything. It is what it is, you’ve got to do your job and that’s it.”

Responds Sebastian: “It’s straight to the point and it’s good character building as well. No one’s going to be nice to you in this world. You’ve got to perform, you’ve got to be quick, so the harder he is on me, the easier it’s going to be on me with everyone else.”

So far, Sebastian has been quick. Managing traffic will be a whole new experience for him in today’s race, for which Hedman qualified the car in second. But his father praises his maturity and dedication, and more and more he’s letting Sebastian figure things out on his own.

“The more we’ve gone to races now, the more I’ve tried to let him do his thing by himself with engineers and things,” JPM says. “I’m normally more in the background when he needs something and if from the outside I see that they’re missing something, I’ll come and go, Hey, you’re missing the boat, whether it’s him or the car or whatever it is. I think it works pretty well.”