Keselowski cruises to victory in first Duel race at Daytona 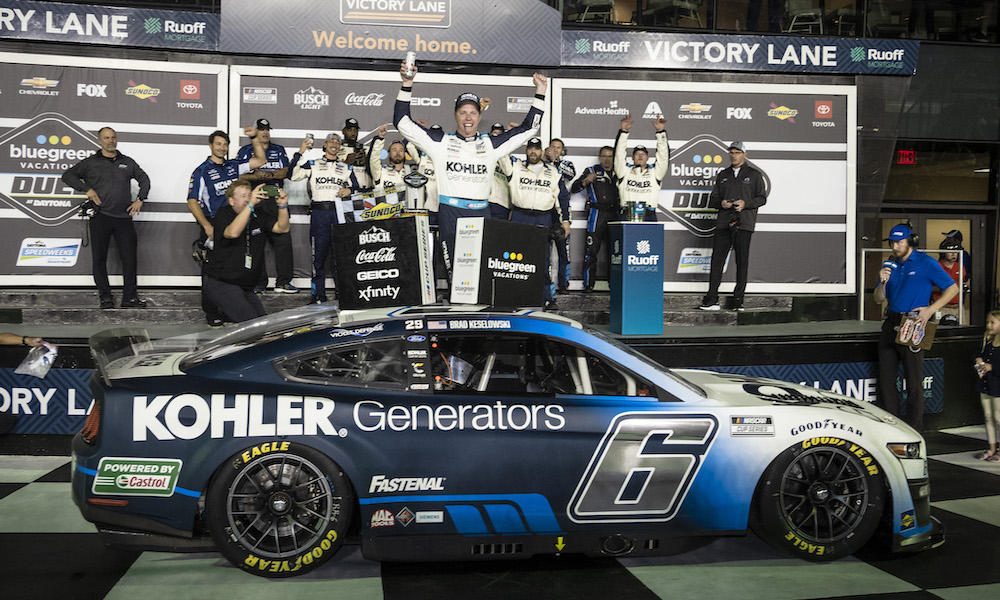 Keselowski took the lead from former Team Penske teammate Ryan Blaney with four laps to go. The Ford drivers took two tires on their green-flag pit stop, which allowed them to leapfrog and gap the Chevrolet drivers as the latter took four tires.

The win is the first for Keselowski in a Duel race at Daytona. He led four laps.

“I felt pretty good about our car in practice on Tuesday,” Keselowski said. “I’ve got to give credit to the other Fords; we worked really well together – Ryan Blaney, Chase Briscoe, Austin Cindric. We had great strategy, and we stuck together and drove away and got ourselves in position where we could control the finish of this race, and I’m happy to see all those Fords upfront. Good job to all those guys. Great start for our team. This is special.”

Cindric finished second in a battle between he, Blaney and Briscoe. Blaney led 22 laps.

Larson led a race-high 34 laps, which were the opening 34 laps before the pit stop cycle.

Kaz Grala earned a spot in the Daytona 500 for The Money Team Racing with an 18th place finish. Grala passed JJ Yeley on the last lap for the transfer spot. Yeley had been lapped by the leaders and did not have drafting help on the outside lane, which played in Grala’s favor as he drove by with the inside lane.

Grala hung tough after losing the draft early in the race and being called for speeding on pit road.

Sunday will be Grala’s second run in the Daytona 500. He finished 16th with Kaulig Racing last season. It will be the debut race for The Money Team Racing, owned by boxing Hall of Famer Floyd Mayweather.

“I made it happen; not the way I wanted to,” said Grala. “I made a mistake, I sped on pit road, and I thought we were out of it. But I wasn’t going to give up no matter what, and we got into a little line with Kurt Busch pushing us, and we were running fast times, and I was hoping the timing was going to work out. It wasn’t by much, but we caught them in (Turns) 1 and 2 on the very last lap and was able to get by the 55 for it. So, pulled a couple years off my life, but it doesn’t matter because we’re going to be out there on Sunday, and we have a shot to win the Daytona 500. We all do – all 40 of us.

Noah Gragson finished last, 21st, in the first Duel race and was three laps down. Gragson immediately dropped to the rear of the field and did not put himself in danger after locking up a spot in the Daytona 500 on his qualifying speed earlier in the week.