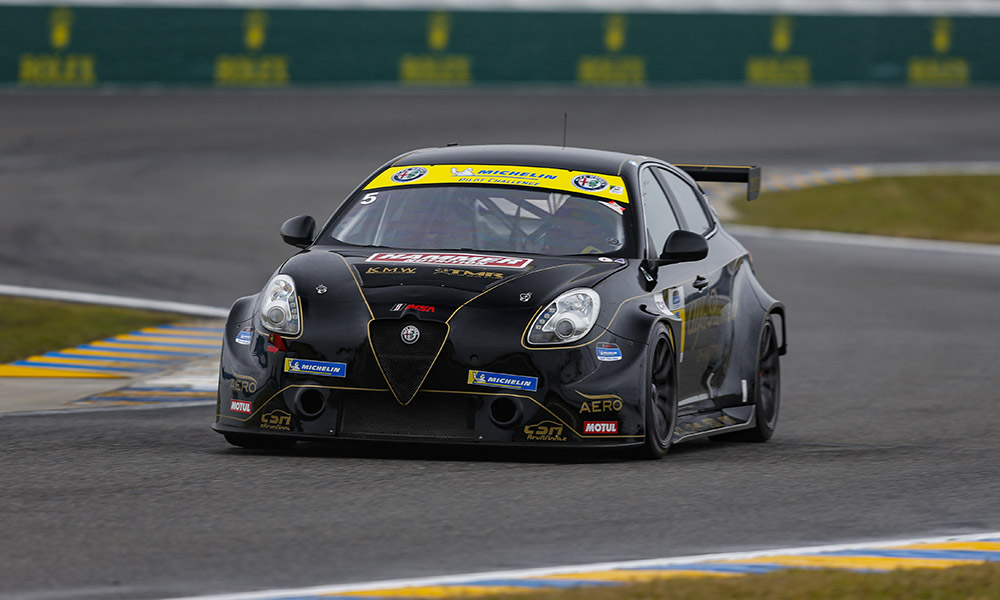 KMW Motorsports endured four years of mechanical failures, crashes, and other misfortunes to finally win at Daytona International Speedway, one of the most coveted races on the IMSA Michelin Pilot Challenge calendar. The only team in the TCR field with an Alfa Romeo, KMW Motorsports faces an onslaught of Hyundai’s and Audi’s every time they take to the track.

However, that competition is welcomed by what Tim Lewis described as the “little Alfa team”.

“I always say we’re just a little Alfa team but when you are competing with an organization that big and with the history of Bryan’s career and Indy 500 wins – when you are going against those guys, you have to bring your best.”

When the team does not bring their best, the repercussions can be significant. As the only team with an Alfa Romeo Guilietta Veloce in the field, KMW Motorsports always operates with one bullet in its gun. An incorrect tire choice in changing conditions could determine if the team scores the maximum 350 manufacturer points or comes home with 70 fewer points to the Alfa Romeo name.

Having only one car in the stable puts the team under a microscope.

“For us, just being one car, if we have a bad day, it’s really bad. They do have an upper hand with strength in numbers. They are able to deviate setup-wise. They are basically collecting six-times the amount of data that we are every practice session.”

One area where the team does have an advantage is the consistency within the team. Both Lewis and Roy Block are entering their fourth season as a driver duo, a remarkable stat considering how often driver pairings change in sports car racing, particularly in the lower levels of the IMSA ladder.

“I think continuity is massive because you really start understanding the nuances of the car,” Block said. “As you go into different tracks, really understand setup better. Also, personnel, we have had very little turnover in our team since we started really. I think that continuity really got us to where we are today.”

Block believes he has gotten the most out of his partnership with Lewis over the past four years. With Lewis’ experience in racing dating back to Grand-Am, Block has been able to learn a lot from his co-driver.

“This is our fourth year,” Block said. “I think it’s been fantastic, especially for me because Tim has driven in Grand-Am before and I pretty much started by just diving into the deep end. Being forced to be held accountable for the ability to set up the car, develop the language with the engineers to communicate what I need, and understand what the car is doing. For me, it’s been like getting a huge education. So, I think I got the better end of the stick.”

The team finished third in the championship last season and sat down together after the year had concluded to see where they could improve both personally and as a unit. Block made a commitment to his team that he would improve his physical condition and complete a triathlon.

Like any good teammate, Lewis took the opportunity to give his friend a hard time. “Ask Roy how his training is going, he’s going to compete in a triathlon in March. Tell him that I was concerned he wasn’t training enough,” Lewis said with a chuckle.

“Oh man, he went there,” Block joked. “This is what I get for being vulnerable with my team, I love it.”