Kyle Busch makes something from nothing in Vegas 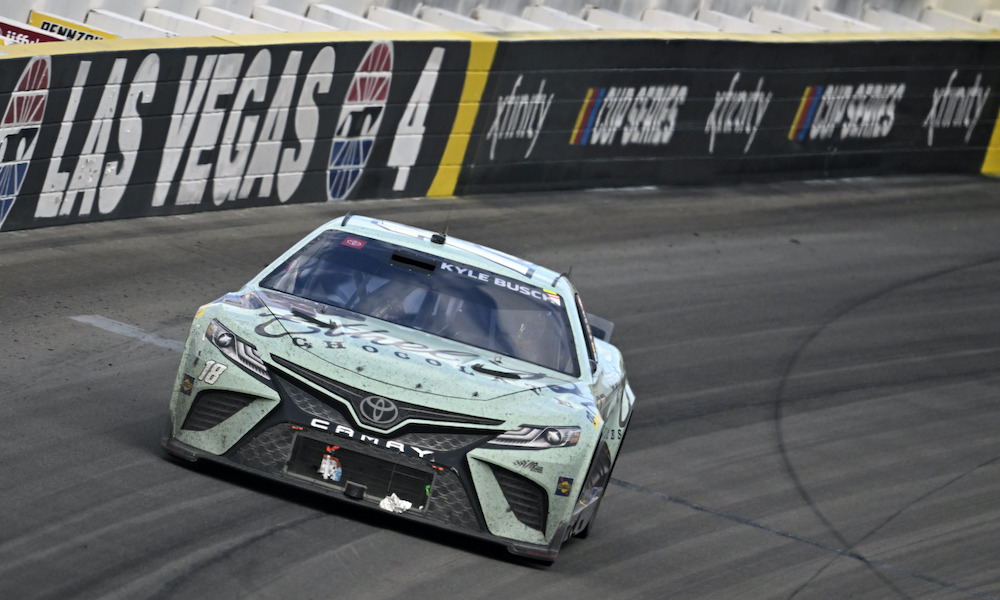 The deck was stacked against Kyle Busch at Las Vegas Motor Speedway and somehow, he wound up with a car capable of – and nearly – winning the Pennzoil 400.

Busch led 49 laps and finished fourth with a car that did not start the weekend Cup Series race-ready. It was a parts car available to the four Joe Gibbs Racing teams should they need to pull anything from it during the weekend. But when Busch completed nine laps in practice and crashed in Turn 3, destroying his primary No. 18 Toyota, the parts car became a backup car.

“Fortunately, we had a chassis that we could assemble and put together and go race today,” said Busch.

“Just a great effort by everybody at Toyota and Joe Gibbs Racing for all the hard work and my guys on the 18 team and also the 11, 19 and 20. They just did a really good job of getting us here today. We had no choice, we had to be here, but they worked really hard all night long and put in a lot of hours, so that was good, and to have the opportunity to go out and race for a win that was really good too. We tried to make the most of it there, but luck just wasn’t on our side.”

It was far from an easy day.

Due to his car being a backup, Busch started last on the grid. It took him until the competition caution on lap 30 to crack the top 20 as he came down pit road in 18th place. But Busch lost his track position because of an extended pit stop to address a shifter issue – it was only going forward and not backward.

On lap 43, Busch was tagged by behind in Turn 2 as he slowed for the spinning Cole Custer in front of him. The contact sent Busch for a half spin, and in the process, went from the banking onto the apron and feared he’d sustained damage to the diffuser. It was an unfounded fear, and Busch returned to battle.

By lap 106, things had turned around and Busch led the field.

Busch would lead three different times, taking the top spot for the last time when pit stops cycled through on lap 227. Busch controlled the race until three laps to go, holding off repeated charges from teammate Martin Truex Jr., including when Truex cleared Busch off Turn 2 with 13 laps to go before Busch pulled a crossover move in Turn 4.

An Erik Jones crash led to the final caution that sent the field to pit road and split strategies. Busch was the first driver off pit road with four tires while the three drivers in front of him, all from Hendrick Motorsports, elected to go with two tires. It was the winning call as Busch, who lined up third through the chose rule, failed to challenge the top two and lost a spot to Ross Chastain coming to the finish.

“I did, yes, I did think I had a shot,” Busch said of the pit call by crew chief Ben Beshore. “I thought four would prevail, but obviously not.”

As for how the parts car compared to his primary car Busch said, “It was fine. They’re all the same. They’re bought at Walmart.”