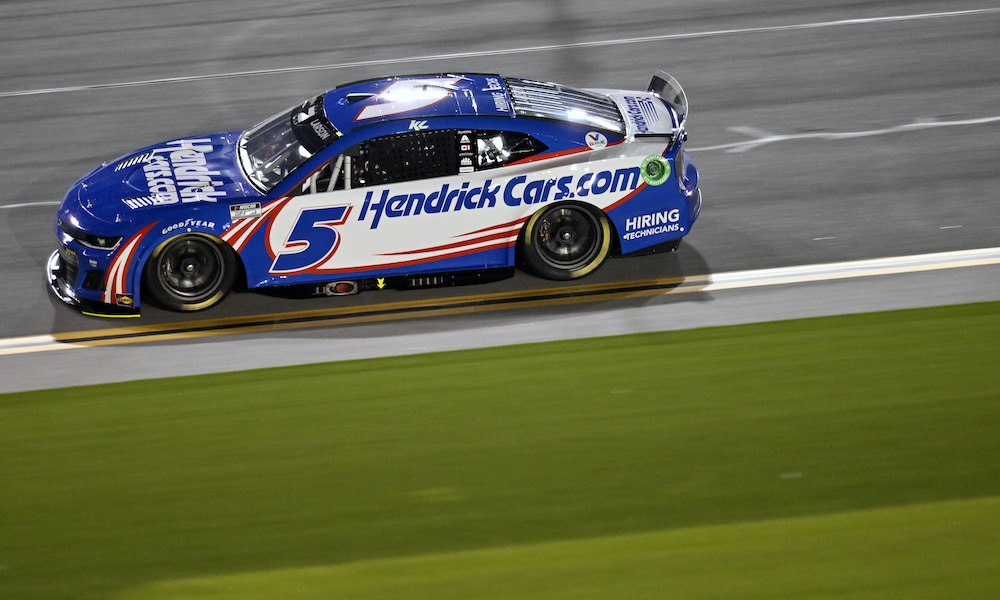 Kyle Larson and the No. 5 Hendrick Motorsports team are still the fastest in the NASCAR Cup Series, this time in qualifying for the 64th running of the Daytona 500.

Larson won the pole with a lap of 181.15 mph (49.68s) in the second round of single-car qualifying. It is his first pole in the Daytona 500, but the seventh for team owner Rick Hendrick in the last eight years.

“It’s really neat,” Larson said. “Anytime, you’re really proud of your team to get a pole here, because this is the littlest it has to do with us drivers – qualifying at superspeedways. Just a huge thank you to the engine shop at Hendrick Motorsports. Everybody who’s had a part in touching these vehicles, whether it be on the computer, engineering or just hands-on.

“It’s really neat, just awesome the speed in our Chevy. Hopefully this is the beginning of a really good weekend.”

Alex Bowman qualified second at 181.04 mph to lock up the front row of the Daytona 500 for Hendrick Motorsports for the second consecutive year. For Bowman, it is the fifth straight time he’ll start on the front row.

Larson and Bowman are the only two drivers with their starting positions solidified for the Daytona 500. The full 40 car field will be finalized after a pair of Duel races Thursday night.

“It’s unbelievable,” said Bowman. “I’ve come down here not locked in, qualified poorly, had to race our way in, so just says so much about Hendrick Motorsports and all these guys. Congrats to the 5 on getting the pole. It’s cool to have the record (for consecutive starts on the front row), but I feel like Greg Ives (crew chief), and my race team should be the ones that get the credit for that record, because the driver doesn’t have much to do with it. But glad I didn’t miss it up for them, and really happy for Ally and Chevrolet.”

While their starting positions are to be determined, Noah Gragson and Jacques Villeneuve know they will race in the Daytona 500. Gragson and Villeneuve were the two fastest open cars in qualifying to earn a spot on the grid.

Gragson qualified the No. 62 Beard Motorsports Chevrolet at 177.55 mph, which was 33rd-fastest. It is redemption for Gragson and the team after failing to qualify for Daytona last season. Sunday will be Gragson’s Cup Series debut.

“It’s pretty special,” Gragson said. “We have one employee with Darren Shaw (crew chief); we have a lot of help from RCR and a great power unit under the hood with ECR. The Beard family, Miss Beard, and the rest of the family, they let me come drive this race car. I know Brendan , you’re not here. But he called me about a year and a half ago, he asked me to come drive this car, and we came up short last year.

“To be able to make my first Cup start on Sunday, it’s really special. We were the fastest out of all the open cars, so that’s pretty good. I’m going to be busy this year with JR Motorsports and now this Beard Motorsports car this weekend. Super excited. Super thankful. Just very proud.

Villeneuve clocked in 36th at 176.43 mph in the No. 27 Team Hezeberg Ford. Not only will it be the team’s debut race in the Cup Series, but it will be the first Daytona 500 appearance for Villeneuve. The 1997 Formula 1 world champion and 1995 Indy 500 winner and IndyCar champion failed to qualify for the race in 2008, but has four Cup Series starts on his resume.

“Super-high,” Villeneuve said of where qualifying for the Daytona 500 ranks. “Obviously, it’s not a win. It’s not like winning the Indy 500 or the F1 championship, but at this point in my career – the last time I tried to qualify here was 14 years ago – just to make the show is incredible. We’re a small team. We didn’t link up with a big team to get the car ready, and it’s highly unexpected to make it on time. So it ranks right after these big wins.”

With Gragson and Villeneuve earning the first two spots available for the open teams, it forces Kaz Grala, Greg Biffle, JJ Yeley, and Timmy Hill to fight for the final two spots in the Thursday night Duel races.

UP NEXT: Bluegreen Vacations Duel races at 7 p.m. ET Thursday.