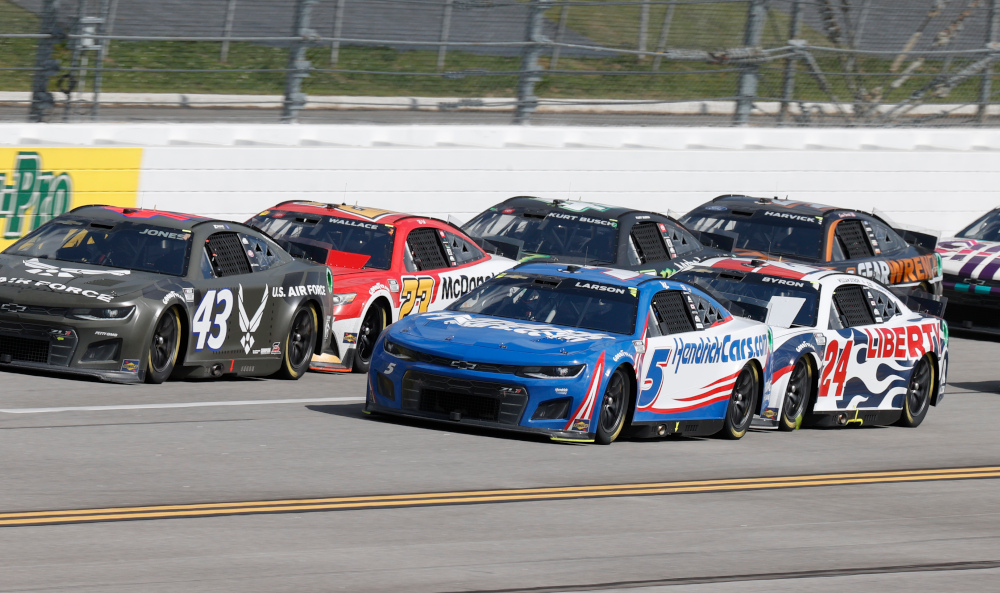 Kyle Larson finally had “it” figured out Sunday at Talladega Superspeedway. He had a career day at the track and a shot to win on the final lap.

Larson led 32 laps and finished fourth. He was second coming off Turn 4 on the final lap and had the momentum to make a move to the outside of race leader Erik Jones. Jones blocked the move, which was to the benefit of Ross Chastain and others charging by on the bottom.

“I feel like I did a pretty near-perfect job for me at a superspeedway until the last lap there,” Larson said. “I should have, like…just kind of faked going high then went back low. I had that run. Ross helped me with that run. It kind of baited me into going to the outside; just a little inexperience probably there.

It was quite a performance for the reigning Cup Series champion. Larson led the most laps he’s ever led in a single Talladega race and got his best finish at the track. It was also his first top-five result there.

Larson pulled off the feat a day after admitting he didn’t know the “right way” to run superspeedway races. Entering Sunday, Larson had five DNFs at Talladega in 14 starts and had led just 13 laps.

The Hendrick Motorsports driver said he didn’t do anything “different or fancy” than in years past. The No. 5 Chevrolet mainly stuck to the bottom with his teammates.

“Our car was a little bit better than normal and we maintained track position all race long,” Larson said.

The move on the last lap came when Larson wanted it to, but he wishes he would have juked left to get back to the bottom. Had he done so, he felt he probably would have won the race.

“Honestly that’s the first time I’ve had a legit shot at winning a plate race in the Cup Series,” he said. “Happy about that. I was in the exact position I wanted to be in; I didn’t want to be leading. I felt like I did a good job with patience and stuff. I made one small mistake there, and it cost me the win.”