Chad McCumbee had two laps left to turn his lead into victory. He made the most of every turn.

McCumbee was leading Eric Foss when Max Faulkner’s No. 38 FastMD Racing Audi slid into the tire barrier in Turn 13 with 15:30 left, bringing out a full-course caution. When the race restarted, McCumbee wasn’t sure if the tires would hold up for the No. 40 PF Racing Ford Mustang GT4 he co-drove with James Pesek.

“We were really fortunate there,” McCumbee said during the postrace celebration. “I felt like our tires were going off pretty bad. … I’d beat them up pretty good.”

McCumbee’s Mustang was ahead of Foss’ No. 56 Murillo Racing Mercedes-AMG GT GT4 when the final green flag waved. Hindman drove the No. 7 Volt Racing Aston Martin Vantage GT4 past Foss into second and began pursuing McCumbee. Hindman got close but couldn’t wrestle away the lead.

McCumbee made it to the finish line 0.472s ahead of Hindman, who co-drove the Volt Aston with Alan Brynjolfsson. Andy Jakos and the No. 14 Riley Motorsports Toyota Supra GT4 that he shared with Alfredo Najri worked past Foss on the final lap for third place.

The final caution wasn’t ideal, McCumbee said, but it helped prove a point.

“I definitely didn’t want to see that caution, but I’m glad it came out,” he said. “It proved that we had the pace to be there. I’m glad we were able to finish it out and get to the checkered flag under green-flag conditions. That’s really important.”

Winning also helped the team bounce back from a disappointing 17th-place finish in the Michelin Pilot Challenge season opener in January.

“We’ve had so much bad luck,” McCumbee said. “Strange things have happened. We’ve been in position for good finishes. Man, we went to the top this time.”

No. 99 Honda slips its way to TCR victory on wild final lap

The Touring Car (TCR) class race boasted its own drama as well. Karl Wittmer capitalized on a last-lap skirmish between the front-running cars to slip past both and win in the No. 99 Victor Gonzalez Racing Team Honda Civic FK7 TCR. It marked the maiden Michelin Pilot Challenge victory for the second-year team, Wittmer and co-driver/owner Gonzalez. 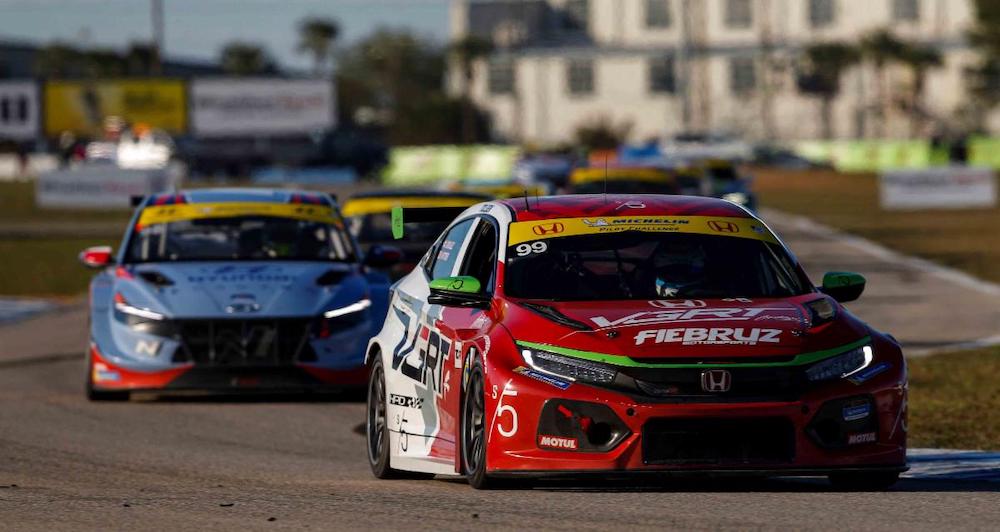 “We have worked so hard to build this from zero,” said Gonzalez, the native Puerto Rican. “A Hispanic team, all my crew guys are Hispanic, and we got a Canadian as my teammate. … This is just the first step. We need to keep building up. I don’t want to get emotional but I’m really happy!”

Running an alternate strategy after starting next-to-last in the 15-car TCR field, Gonzalez moved the No. 99 into the class lead by staying out when others made early pit stops. He finally turned the Honda over to Wittmer on their only stop of the race under a full-course caution with 47 minutes remaining.

A final restart with 3:25 to go found Wittmer in third behind Mikey Taylor in the No. 17 Unitronic JDC-Miller MotorSports Audi RS3 LMS SEQ and Michael Lewis in the No. 1 Bryan Herta Autosport with Curb-Agajanian Hyundai Elantra N TCR.

With time for just two laps, Wittmer thought third place might be the best he could do. Until the final lap, that is, when Taylor and Lewis bumped in Turn 10, allowing Wittmer enough room to slither past and into the lead. However, the drama wasn’t over just yet.

Trying to hold off Lewis, Wittmer charged hard into the 17th and final turn and slid wide on exit. The Canadian relied on his ice racing experience to drift the car without losing control and held off Lewis by 0.182 seconds at the finish line.

“Going into (Turn) 17, I went in a little deep,” Wittmer explained. “I knew the Hyundai was going to pressure me quite a bit so I tried to get the angle and it actually worked out. … When in doubt, go flat out. I just put my head down and it worked.”

“I knew he was a good wheel man,” added his boss Gonzalez. “I’m proud of him.”

Lewis and co-driver Taylor Hagler, the 2021 TCR season champions, made quite the recovery themselves. Hagler served a pair of drive-through penalties early for the No. 1 using improper qualifying tires without proper notification to IMSA, but the duo fought back to finish second. Taylor and Chris Miller salvaged third in the No. 17 Audi.