After 24 hours, it was a team of drivers competing together for the first time, including a Rolex 24 At Daytona rookie, that took the Meyer Shank Racing with Curb Agajanian Acura to victory lane, 10 years after Mike Shank’s last victory in the 24-hour race.

With an all-new driver line-up of Oliver Jarvis, Tom Blomqvist, Helio Castroneves and Simon Pagenaud, the Acura team looked lost in the beginning of the race. They had started the middle of seven DPi cars, fell to last and went a lap down with a tire puncture early in the race. But smart strategy brought them back into contention.

“I believe we were the fastest on pit lane,” said Pagenaud. “I haven’t seen the numbers, but I can guarantee you we were and the guys did a great job in the pits. No mistakes, execution was amazing. But first and foremost was the strategy. We were able to save fuel and go longer than anyone. And this team, they set themselves up to make sure at the end we would put less fuel in the car, would take less time, to leapfrog everybody basically in the pits. And that’s exactly what happened.” 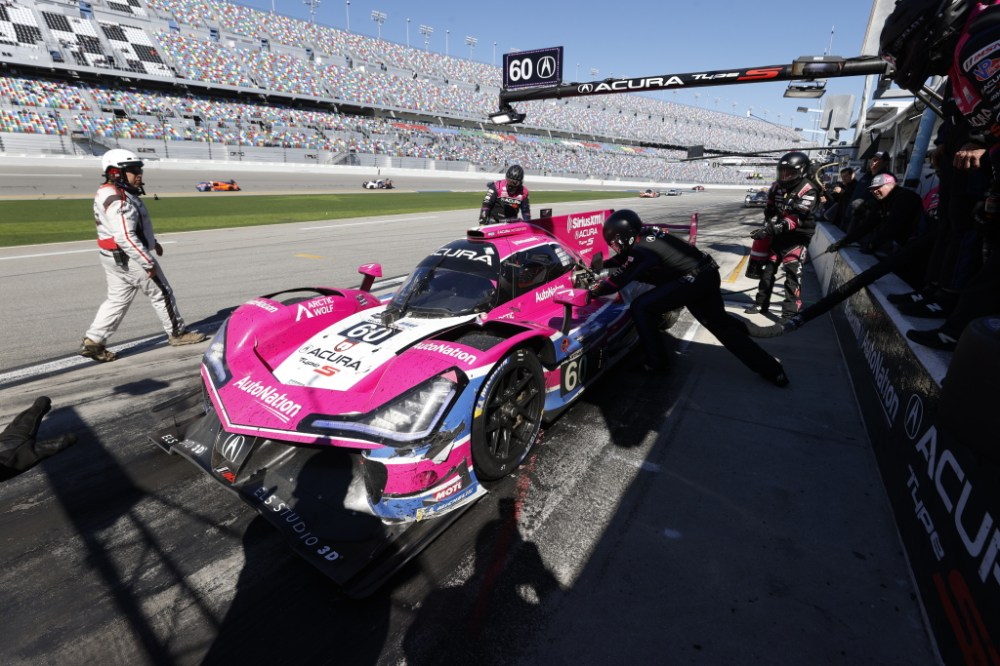 Blomqvist, who missed a Rolex win several years ago due to visa issues, was the Rolex rookie of the bunch. Jarvis is fresh from the shuttered Mazda DPi program. Castroneves and Pagenaud are MSR’s IndyCar Series drivers brought in for the 24-hour race. And they jelled immediately and performed admirably to deliver a win that MSR had lacked in 2021.

“I was just going crazy today because we came out of the gate and we went from where we started fourth or third to last and, I went, ‘What the hell is going on here?’ We went to work and we made the car better and I stopped talking on the intercom,” said team co-owner Mike Shank.

“We needed this bad — real bad. We had a real tough year last year,” he added.

The Acura fell a lap down early due to a tire puncture, but six hours in was back on the lead lap. The cars took its turn in the lead now and then, but it wasn’t until just before dawn on Sunday morning that the car truly looked like a contender. When trouble struck the Chip Ganassi Racing Cadillacs that had mostly dominated the race — the No. 01 was felled by an apparent alternator problem and the No. 02 with a fuel pump issue — it distilled into a four-horse race with the MSR Acura, the No. 10 Wayne Taylor Racing Acura, the No. 31 Action Express Racing Cadillac and the No. 5 JDC-Miller Motorsports Cadillac.

While the No. 5 with Loic Duval at the wheel looked strong in the late going during the longest period of green flag running, late yellows shook up the order and equalized the field. Once that happened, the No. 5, which also included Tristan Vautier, Richard Westbrook and Ben Keating, seemed to lose the pace that had allowed it put a gap on the rest of the field. From the two-hours-to-go mark, it was looking very much like an Acura vs. Acura battle.

Blomqvist took the lead from Ricky Taylor in the No. 10 WTR machine after 22 hours of racing before handing the car over to Castroneves. The final yellow came out with about 50 minutes left, and the four DPi contenders all pitted, with the No. 60 emerging in the lead after taking fuel only. With 43 minutes left in the race, making it to the end was questionable. Both Cadillacs would pit for a splash before the caution ended to make sure they could make it to the end. In doing so, they likely made it possible for the Acuras to make it to the finish by extending the caution. The final green waved with 30 minutes to go, and it was all Castroneves out front to take the win over the No. 10 of Taylor, Filipe Albuquerque, Alexander Rossi and Will Stevens. The WTR team was going for its fourth-straight Rolex 24 victory. The only position change in the final half hour was the Duval passing Pipo Derani into the No. 31 to take third for the No. 5.

There was a bit of drama on the final lap for MSR when Castroneves came upon the GTD Pro fight that was coming to a head in the Le Mans Chicane, nee Bus Stop. Not only did Castroneves nearly get caught up in an accident, it slowed him and allowed Taylor to close some of the gap.

“I saw nothing, which was absolutely dirt and I and then I felt a lot of things … like changing my underwear was one of them,” laughed Castroneves. “Code Brown was another one. I was like all over the place and and thank God that car just keep skidding and did not stop right away. I did anticipate it because my spotter did mention it was a fight for win. I did not expect a big crash like that and right in front of me. It was a little bit of anticipation and luck at the same time. And thank God I had a little bit of a gap between me and Ricky. It was very scary. I don’t I don’t think any moment of the race I had that kind of scary scenario and until that one.”