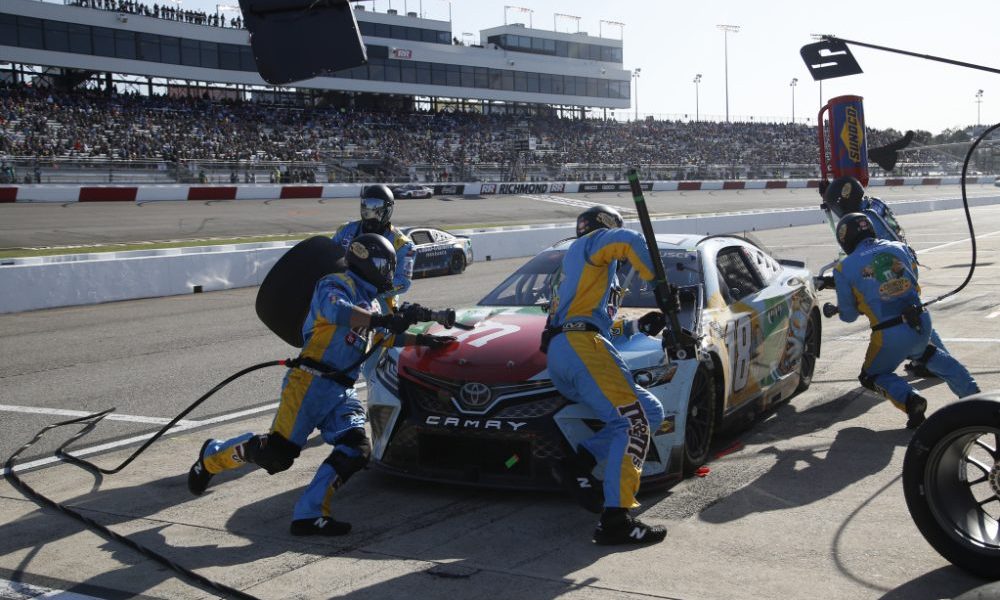 NASCAR Cup Series Managing Director Brad Moran has reiterated that the late call on Kyle Busch’s team for a grille tape infraction at Richmond was because race officials had to do their due diligence before issuing a penalty.

Busch was penalized on lap 345 for having tape on the grille of his Toyota after the team had mistakenly put the tape there when aiming for the brake duct. With the introduction of the Next Gen race car, NASCAR implemented a new rule banning teams from controlling temperature and downforce by putting tape on the front of the cars.

“This is new, so I don’t want to fault anyone for the error that was made by the tape being on there in the first place,” Moran said on SiriusXM NASCAR Radio. “But there is no tape allowed or permitted on the grille of these new cars and it was all part of the design.

“Everybody worked together in the industry, and there was a big push to keep teams on the conservative side and keep the engine temps under control. So that’s why the rule came in.

“There is a throttle plate behind the nose of the car, and it controls the temperature, so the tape was definitely not permitted.”

Moran said NASCAR further reviewed everything Monday to put together a better timeline of how things transpired for the No.18 team.

“The tape was put on around lap 128. However, it was brought to the tower at lap 234. So we certainly needed to do our due diligence of how it got there, what it really was, so we went back as the race was going on obviously and did our due diligence to ensure, first of all, the team placed the tape on the grille area.

“We go back, found footage, found what we needed to say, ‘Yes, the team actually put it on.’ Unfortunate they had a couple stops where they could have pulled it off, and we probably wouldn’t be talking about it today, but that didn’t happen.

“So we got notification around lap 234, and it took a bit of time. Obviously, a lot of green flag racing at a three-quarter of a mile track. It takes a while to pull all that up and make sure we do our dull diligence, but the last thing we’re going to do is bring a vehicle down and find out later it was something picked up off the rack or they grabbed it on pit road or something to that fact.

“But once everything was sorted out, we saw where it happened, and the crew chief was notified that it does have to be removed.”

Teams are allowed to put tape by the brake duct, as the team had intended to do, but at no time is tape permitted on the grille.

Pushed on why it took so long to make the call, Moran explained it wasn’t noticed until a pit road official saw the tape on the grille of Busch’s car and notified the tower. Once it was reported, NASCAR officials first looked at the car in real time on the track to see if anything was there and then pulled footage.

“So we did have to go back and review the stops to find out actually when it was placed on there, if it was placed on there by the team,” said Moran. “Once it was clear that is what happened, then we really had no choice by the point the tape had to be removed. It’s not allowed to be there while racing.”

Busch served his penalty on lap 351 from sixth place. He drove back around the leader to get his lap back and finished ninth.