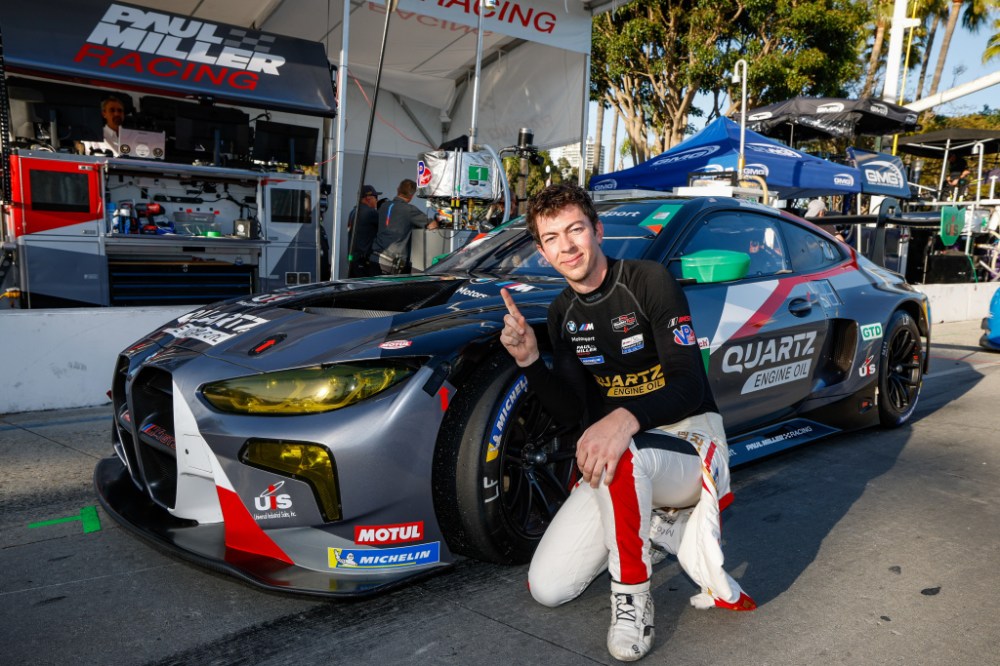 The premise of homologated race cars like the GT3 cars found in IMSA’s GTD categories is that the cars are all equal and ready to do battle. A team doesn’t have to spend time developing a car; that’s already been done, but there is always a learning curve. Paul Miller Racing adapted to its new BMW M4 GT3 and won GTD on the streets of Long Beach in only its second race with the car. It wasn’t much of a curve; it was more of a straight, near vertical, line.

“I think it says a lot about manufacturer involvement and team relations,” said Bryan Sellers, who drove the No. 1 car into victory after Madison Snow put it on pole, started the race and handed it over in the lead. “The information that BMW has been able to pass forward to us has certainly helped our learning curve dramatically. But I think that, a little bit selfishly, we have one of the best teams in the business. I think that our crew always executes and I put them up against anybody, so it’s great to see them getting their hands on a piece of new machinery and what they’re able to do with it. Today was a really, really good day and you can’t sit here and say that we didn’t have a good BoP, because we did. All the BMWs were fast. I think that what you have to do is…make sure you win on days like today. That’s when it really comes down to everyone – the teams, the drivers and everyone putting it together.”

Sellers and Snow won this race last year on their way to finishing second in the championship, but that was in a Lamborghini Huracan GT3 — one more in a series of marques that the team has won with in GTD.

“For Madison and I, this will be our second manufacturer we’ve run in and won in together as a pairing, but I’m gonna take a guess and say that the team’s probably at four manufacturers: Porsche, Audi, Lamborghini and now BMW, and it’s pretty cool. I think it shows what Paul Miller has built as a team owner and as a program. You look at these things and you never know how long programs are going to last. He’s been here for, I think, almost 14 years now and given a lot of people a lot of opportunities to win pretty cool races like we won today.”

Paul Miller Racing placed their order for the BMW late and didn’t expect to receive it until after Sebring. Another team ahead of them on the list cancelled and PMR was able to run Sebring after missing Daytona. The team showed good speed at Sebring, although the race was a challenge. After seeing the less-than-stellar results that the other BMW teams achieved at Daytona, before they even got their hands on the car, it would have been easy to wonder if switching marques was a good idea. Sellers assures that, even after seeing the new M4s off the pace, they knew they were moving in the right direction.

“I don’t think that thought ever crossed any of our minds,” he explains. “More so because you know that BMW is not going to lose for long and that they’re going to make the fixes necessary. I mean, people with heritage like Porsche, like BMW — they don’t lose, right? And if they do lose, it’s not because they didn’t make the right corrections and the preparation wasn’t where it needed to be. So my thought was, ‘Maybe this is going to take a little bit longer than what we originally thought or hoped,’ but never, ‘What did we do?’”