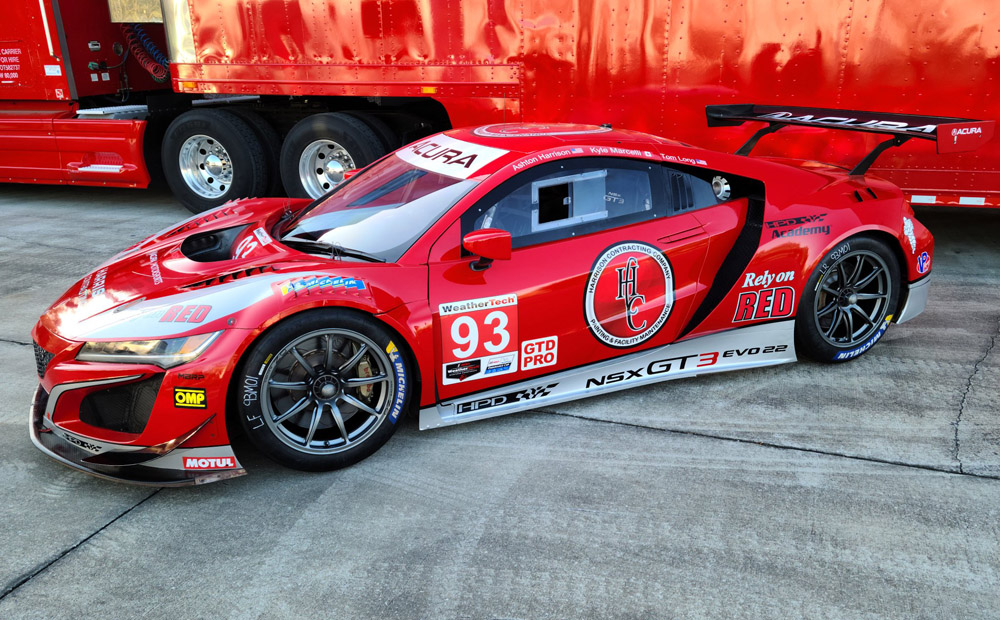 Racers Edge Motorsports is teaming up with Wayne Taylor Racing to field an Acura NSX GT3 Evo 22 in the IMSA WeatherTech SportsCar Championship GTD Pro class at the Sebring 12 Hours next month. Ashton Harrison, an HPD Driver Academy graduate, will pair with Kyle Marcelli and Tom Long for the race.

Harrison, the 2022 full-season driver for Racers Edge in SRO GT World Challenge America, will anchor the Sebring line-up. Harrison is a 2021 HPD Driver Academy graduate and part of the WTR driver development program. In her first GT3 race last November, she won the Silver Cup in the Indianapolis 8 Hour Intercontinental GT Challenge event with Matt McMurry and Mario Farnbacher. She will be joined by seasoned professional Marcelli, with whom Racers Edge won its 2019 GT3 title. Marcelli is also a coach for the HPD Driver Academy program, a driver for WTR in Lamborghini Super Trofeo Series, and the 2020 GS Michelin Pilot Challenge class champion. 2018 IMSA TCR champion Long, who previously raced in DPi as a Mazda factory driver and is Harrison’s long-time coach, rounds out the trio.

“This is a really fun and exciting opportunity for Racers Edge Motorsports,” said Racers Edge president and CEO Jon Mirachi. “Wayne Taylor Racing has tremendous experience and success in endurance racing and merging that with our expertise and experience with the Acura NSX GT3 is a great combination. Add in HPD’s unmatched technical support and we’re confident we have a really strong effort. Our two teams and HPD all have a commitment to winning, so we’re looking forward to building on this collaboration for the future. And finally, having Ashton take on this challenge gives us yet another opportunity to showcase one of our HPD Academy graduates and we believe, a future star in sports car racing.”

After successfully racing in Grans Am and the Continental SportsCar Challenge series for over 25 years, Racers Edge Motorsports established themselves as strong competition in the SRO Fanatec GT World Challenge America powered by AWS series, most recently winning the 2019 GT3 Pro-Am drivers’ championship and 2020 GT3 drivers’, teams’ and manufacturers’ championships in an Acura NSX GT3 Evo. Through the support of HPD Racing, Racers Edge also helped develop and now operates the HPD Driver Academy program, which expands for 2022 to include a TCR race car in addition to the current NSX GT3 program.

Wayne Taylor Racing enters its 16th year in sports car racing with a continued focus on its championship DPi effort with the No. 10 Konica Minolta Acura ARX-05, while also beginning development and testing with Acura and HPD of the LMDh Prototype (now to be named GTP).

“It’s an exciting time for Wayne Taylor Racing to be working in collaboration with Racers Edge,” said Travis Houge, vice president and general manager of WTR. “We have been looking for some time on a way to put together a GTD program. It’s the next level for the program that we currently run in Super Trofeo in order to give our drivers a place to grow and develop within the IMSA WeatherTech platform. Racers Edge worked really well with HPD and Ashton in the Academy last year and I think they fit the overall brand that Wayne Taylor Racing strives to present. The package we have put together is strong. Wayne, Jon and I have had discussions on how to move this program forward in the future with the hope of building a long-term relationship between all our companies.”

The 12 Hours of Sebring, Round 2 of the IMSA WeatherTech SportsCar Championship, takes place March 19.