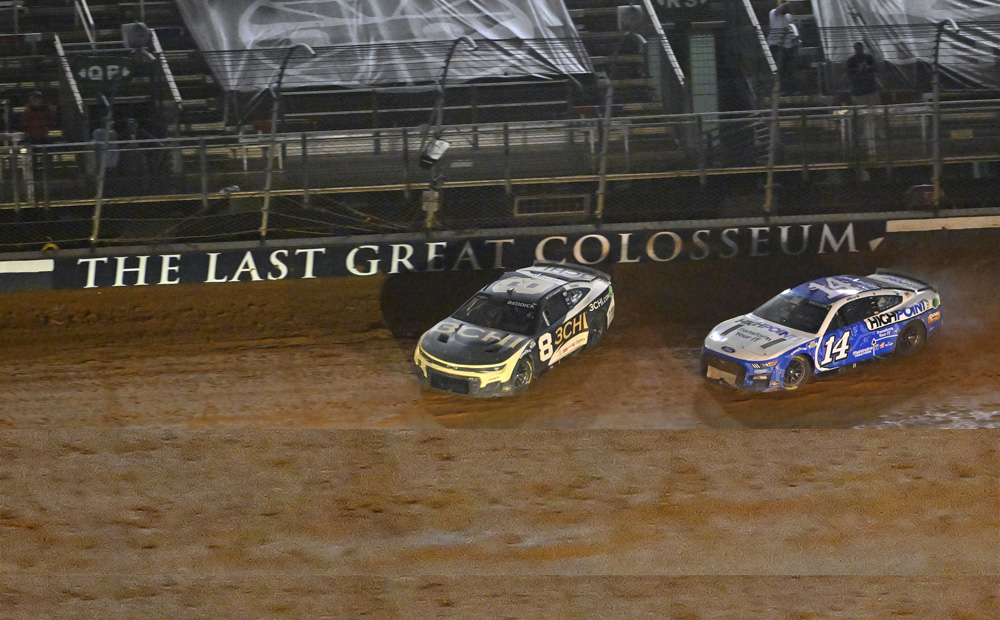 Tyler Reddick was spun by Chase Briscoe from the race lead on the final lap of the dirt race Sunday night at Bristol Motor Speedway, and yet he took the blame for it happening.

“I let him close the gap on me in (Turns) 1 and 2 on the white flag and he was right there,” Reddick said. “We had an opening of lapped cars in front of us; there wasn’t any cars on the bottom. So maybe if I had just run a normal line, I would have been OK. I need to go back and look at it some more. But I knew what I would have done in his situation. I would have done the same thing. Honestly.”

Briscoe took his shot in Turn 3 by diving underneath Reddick. But Briscoe was unable to hang on and spun sideways up the racetrack. In the process, Briscoe’s right rear caught Reddick’s left rear, which sent Reddick spinning.

Both ended up on the apron in Turn 4 with Reddick’s car pointing straight again. Reddick got going again and held the lead coming onto the frontstretch, but not at full speed, which allowed Kyle Busch to shoot by on the outside for the win at the checkered flag.

“I had no idea that I was just in second place or that close to winning the race like I was,” Reddick said. “We were spinning there, and I was trying to save it, and I should have gave up on saving it sooner and started downshifting sooner so I would have been able to get rolling. I just kind of stalled a little bit, not fully lost power, but it took me a second of hesitation to get it down to second gear to get going again. That was enough for Kyle to barely get right by us at the finish line.”

Reddick admitted it would be easy to be frustrated with the turn of events, but he was level-headed and calm after climbing from his car. Briscoe, who finished 22nd, walked the length of pit road and waited for Reddick to finish his television interview before apologizing to Reddick for collecting him in the spin.

There were no hard feelings between the two, and Reddick had no thoughts of blowing up or getting physical with Briscoe.

“Well, it’s Easter for one,” Reddick said with a laugh. “Two, I just look at it like I could have done a better job the last couple of laps to keep distance between us. A gap between us, honestly. That’s just the way I look at it.”

Reddick took the lead off a restart with 100 laps to go, shooting the middle from the fourth place. Choosing outside lane on multiple restarts after that, Reddick kept control of the race and fended off challenges from teammate Austin Dillon, Briscoe and Busch.

The race restarted for the final time with 20 laps to go, and Reddick initially drove away from Briscoe and Busch as they battled for second place. Briscoe took the runner-up spot with 18 laps to go, and when Reddick’s lead started to shrink over the final five laps, he expected Briscoe to make a move.

“I let him get a little too close and he was within reach to really go for it in the last corner,” Reddick said. “I tried to defend for it, and, I mean, he drove it in from really far back. I kind of knew what was coming because I had to make pretty similar crazy moves at times in the race to pass some cars. It’s just tough. I knew it was coming, and I thought I defended it as well as I could.

“The only thing that would have made a difference was just running better laps the last two or three there to keep a little bit of a gap between us. But credit to him. He did a really good job of just driving the wheels off that car the last couple of laps to close the gap.”