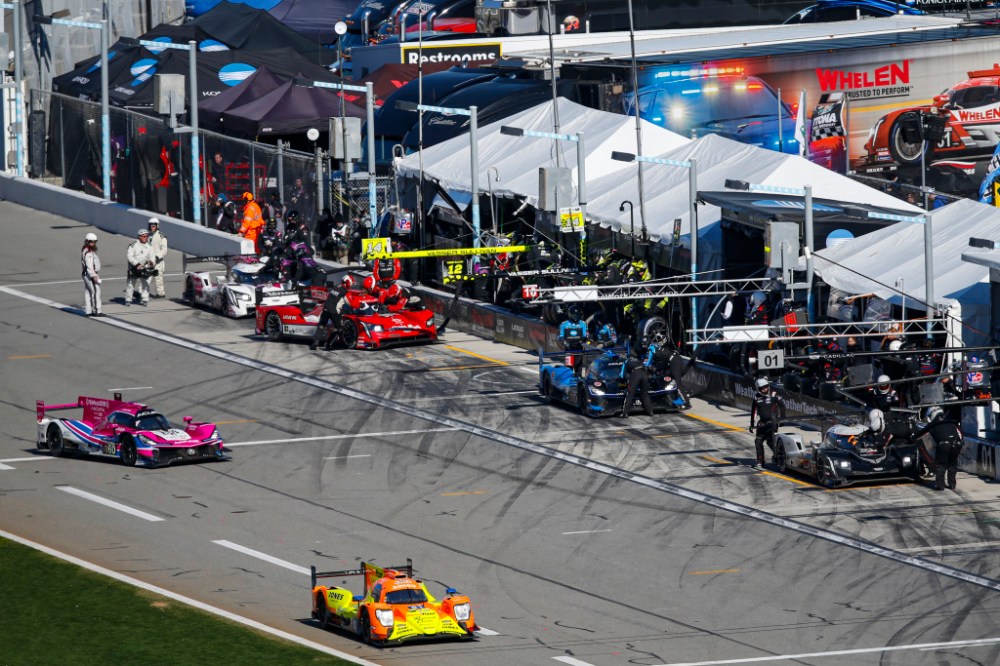 A sprint race for the IMSA WeatherTech SportsCar Championship is 2h40m, and as the time left in the 60th Rolex 24 clicked past that mark and toward the final two hours, it is indeed turning into a sprint race as expected.

The No. 5 JDC-Miller Motorsports Cadillac continues to show its strength, aided by the other three DPi entries still in contention battling with each other. First Mike Conway in the No. 31 Action Express Racing Cadillac battled with Filipe Albuquerque in the No. 10 Wayne Taylor Racing Acura for second, which slid them back toward Tom Blomqvist in the No. 60 Meyer Shank Racing with Curb Agajanian Acura. Albuquerque got to second, and a battle for third between Conway and Blomqvist, eventually taken by Blomqvist as he swept around the outside into Turn 1 and used one of the BMW M4 GTD Pro cars as pick, allowed Albuquerque to pull out a gap.

The pit stop sequence began with 2h11m left, and the four emerged in the same order with similar margins. Ricky Taylor replaced Albuquerque in the No. 10, apparently to the end. All four cars will need three stops to make it to the end without a lengthy yellow.

A stop-and-go penalty for a pitlane speed violation has put the No. 54 CORE Autosport Ligier in LMP3 into the clutches of the No. 33 Sean Creech Motorsport Ligier with Malthe Jakobsen at the wheel, and he’s going after Braun in the No. 54. That has also given the No. 74 Riley Motorsports Ligier some cushion for Felipe Fraga, now more than a minute ahead.

Mathieu Jaminet and Laurens Vanthoor continue to battle as the GTD Pro fight between the No. 9 Pfaff Motorsports Porsche 911 GT3 R and the No. 02 Porsche of KCMG rages; this one is still anybody’s game.

News and notes • Although the No. 01 Chip Ganassi Racing Cadillac is out of contention, that’s not slowing it down. As the track warmed up from its frigid overnight temperatures, Alex Palou set a new Rolex 24 lap record, knocking more than a quarter-second off the time set by Kevin Magnussen late last night. Palou turned a 1m33.724 with 2h25m left in the race.

• The Corvettes had their struggles this week, but showed promise in the race, and Jordan Taylor, driver of the No. 3, believes there is potential. “Other than the alternator issues, we’ve had a faultless and flawless race,” he said. “The strategy and pit stops have been great. It’s good to see the team executing so well. It’s unfortunate we had that issue, otherwise we’d be fighting in the top five somewhere. It’s good to get the extra miles and it’s good the guys got us back out there because we have a championship to fight for at the end of the day. We’ve made up some points by attrition.”