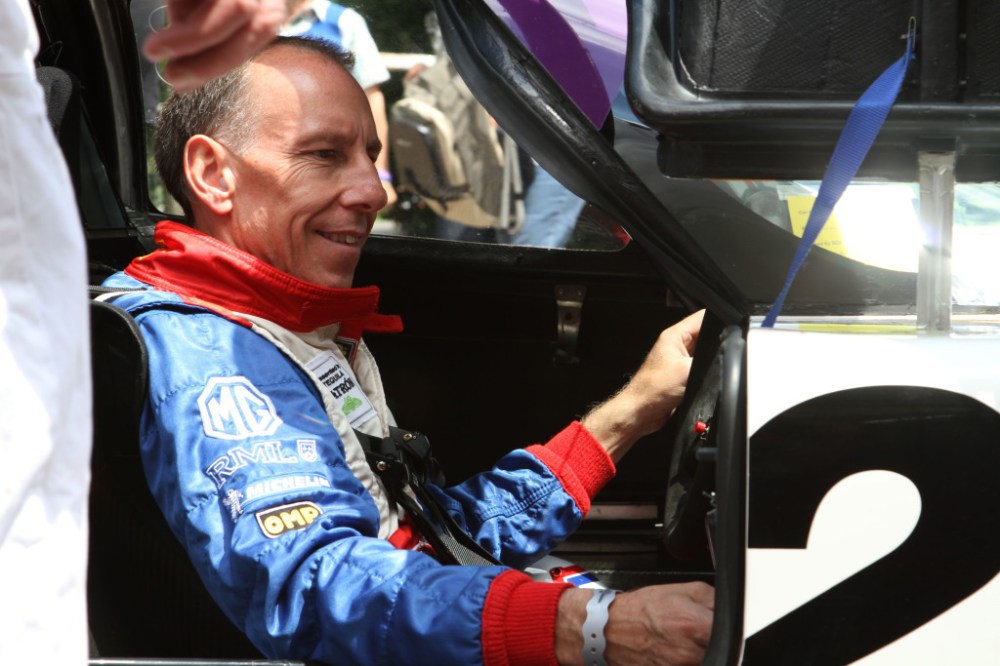 With 10 podiums in 19 starts, including two victories in the mighty Eagle Toyotas, Andy Wallace’s success at Sebring International Raceway earned him induction into the Sebring Hall of Fame shortly before the start of this year’s Mobil 1 Twelve Hours of Sebring Presented by Advance Auto Parts.

Afterward, Wallace was observing the race’s early stages unfold from the tower that overlooks start/finish at the famed circuit built on the former Hendricks Army Air Field and reminiscing.

“When you’re racing, and I raced for more than 30 years, your head’s in what you’re doing,” he said. “You don’t really notice a lot of stuff outside your little world. But what I did notice every time I came to Sebring is the number of people that come to watch this event, how difficult it is to make your car last for 12 hours over the bumps, and how intense the racing is. So to get the e-mail saying ‘we want to induct you into the Hall of Fame’… what a massive honor. I jumped at the chance to come back, and I have such fond memories of this track.”

Wallace, who won the race in 1992 and ’93 pairing with Juan Manuel Fangio II in the All American Racers Eagle MkIII-Toyota, was inducted along with Jacky Ickx, Stefan Johansson, David Hobbs and Walter Cronkite (yes, that Walter Cronkite. The CBS News icon was the official voice of the 12 Hours of Sebring when it was broadcast nationwide on CBS radio during the 1950s. Cronkite also competed in the 1959 12 Hours, co-driving a Lancia to a fifth-place class finish. -Ed.) In addition to his Sebring successes, Wallace is a four-time winner at the 24 Hours of Le Mans and a three-time winner in Daytona’s 24 Hours. His resume includes drives not only in the Eagle Toyotas, but the Jaguar XJR-12, Panoz GTR-1, McLaren F1 GTR, Riley Scott Mk III, Audi R8 and Bentley EXP Speed 8. Wallace’s experience in sports cars is hard to match.

“What changes most about the racing is the regulations keep changing,” he said. “So the cars get so incredibly fast, and everybody’s worried about the safety. So they change the rules trying to slow the cars down that last for about 10 minutes until the engineers figure out ways of making them go even faster. We used to have a pretty much flat-out corner onto the back straight where there’s a little chicane there now. So we used to come flying onto the backstraight. And those cars in those days… I was driving for Dan Gurney in the Toyota, so they were full ground effect cars — massive, massive downforce, we had a little 2.1-liter four cylinder with probably 900 or more horsepower, very, very peaky. And the throttle response was almost non-existent. A the hairpin, you go down through the gears, it goes through the hairpin, you had to stand on the gas way before you turn in or there’s going to be nothing for three, four seconds.”

Wallace recollects the Sebring victories that got away – one year when a storm knocked out the electricity and the Dyson Racing team for which he was driving didn’t get credit for a lap; another where a safety car was sent out at the wrong time. But one that sticks out in his mind is the 1992 win – not so much for the race itself, but the events leading up to it. He had been testing the Toyota TS010 at Eastern Creek in Australia, part of a massive nine-day test as Toyota was preparing for the world championship.

“Turn 1 at Eastern Creek is a left-hand corner, 190mph flat-out with a big bump in the middle,” he said. “On the ninth day, going over this bump, two ribs popped. It was the 29th of February, 1992 and Sebring is three weeks later… it’s not going to be good. So I couldn’t tell Dan — I kept it to myself because I knew he would replace me. We were just two drivers, myself and Fangio II, and coming to the bumpiest circuit with a couple of broken ribs. So I remember that one well, because I was panicking (that) it wasn’t going to be OK. But it was, and I guess I got enough adrenaline to keep it away from my mind.”

Wallace has been retired for a dozen years, but he has found a new way to get the adrenaline pumping,as a test driver for Bugatti. He helped develop the Chiron and the Divo. That included pushing the Chiron Super Sport 300+ to a record-breaking 304.77mph.

“When the topic came up of, ‘Right, we want to see if we can meet 300 miles an hour,’ I kind of got the job,” he said. “It was a bit of a hot potato, and I ended up catching it. And that is something I will never, ever forget. I often say to people as a racing driver, you’re very well used to doing 200 miles an hour; but nothing, nothing will prepare you for what it feels like to drive over 300. If you’re lucky, you’ve probably driven a car that goes 200 at some stage in your life; maybe if you then drive one that goes 220… it’s only 10 percent more, but in reality that extra 20mph feels so much more. So you follow that through to 304.77, and that’s amazing. It’s a mile in a little over 11 seconds at that speed. And the track’s five-and-a-half miles long. You can’t see the other end when you start and yet you set off. It’s coming. If the track was longer, you probably find a bit more speed too, as it’s still climbing.”

Many younger automotive enthusiasts may only know Wallace as a former racing driver who went 300mph in a Bugatti. But his history speaks for itself, having conquered the world’s great endurance races in some of the most fantastic racing cars the world has seen, and now recognized with his induction into the Sebring Hall of Fame.