Starting from the sixth position, Thomas had a tremendous start and was in the fight for the lead on the opening lap. He had to concede the lead to Tyler Gonzalez (No. 51 Copeland Motorsports), however, the only other driver to have a win so far this season.

It didn’t take long for Thomas to gain control of the lead, where he stayed for the remainder of the race. It was by no means easy, with two full-course yellow periods that forced Thomas to go on the defensive for the hectic restarts. It didn’t hurt, however, that his primary opposition, Gonzalez, had to pull off just past halfway with a mechanical issue.

“At this place, half the challenge is the car and the track instead of just the competitors,” said Thomas. “Even though I started from sixth, I knew I wanted to get out front and stay out front. I just maintained that gap, so I didn’t have to push any harder than I needed to. It worked out and I’ll be happy to do it again tomorrow!”

This is three straight wins for Thomas, who won the season-opener at Daytona International Speedway in January, as well as the 2021 season finale at Road Atlanta in November. He provisionally extends his lead in the championship to 130 over Chris Nunes (No. 32 Formidable Racing).

Though Wagner started and finished second, those results do not illustrate the amount of work Wagner had to do to claim the runner-up spot. In the end, there wasn’t much fight left in the car to challenge Thomas for the win.

“I was really nervous on some of the restarts just to be able to keep my position,” Wagner said. “I thought I was going to struggle if I got shuffled to the back so I drove really hard. I’d be able to build up a cushion, but then I’d need to save my brakes a bit, so it was a tough balance. Jared drove a great race and he had enough of a gap so he could manage all the way to the finish.” 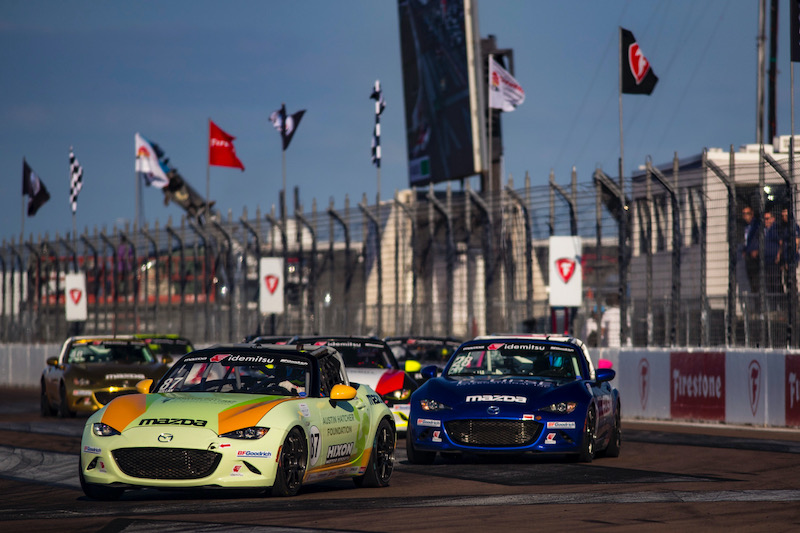 A winner at St. Pete last year, Rollan clawed his way to third from 10th on the grid. It took some time to make his way through the bottom half of the lead pack, but his experience showed as the Floridian made smart choices and conserved his braking power.

“I had to be smart with my brakes but that was the case for everyone I think,” Rollan said. “Joey gave me a run for my money at the end. That was a lot of pressure and that made me nervous, but I was happy to keep the consistent laps down and keep him behind me and then secure the podium. I’m really happy. Hopefully tomorrow we can do the same thing.”

Crossing the line in fourth was the highest rookie finisher of the race: Joey Antanasio (No. 43 Formidable Racing). He had an inspired run from 10th to fourth, finding an advantage whenever his competitors were struggling.

His teammate, Nunes, finished fifth, which must have been a relief after changing engines overnight.

The close confines of the St. Petersburg street course made for some incredible battles, especially in the top 10, where the order could be turned upside down with the slip up of just one driver, or a car slowed by a brief mechanical issue. That pack included last season’s Rookie of the Year Sam Paley (No. 28 McCumbee McAleer Racing), polesitter Glenn McGee (No. 23 JTR Motorsports Engineering) and the race’s Hard Charger, Jameson Riley (No. 31 Copeland Motorsports).

Riley picked up 10 positions during the race, having started seventh.

Saturday’s Round Four race is slated for 10:00am ET and will be streamed live on RACER.com.

McGee is once again the polesitter, sharing the front row with Wagner.