Vanthoor and the agony of defeat 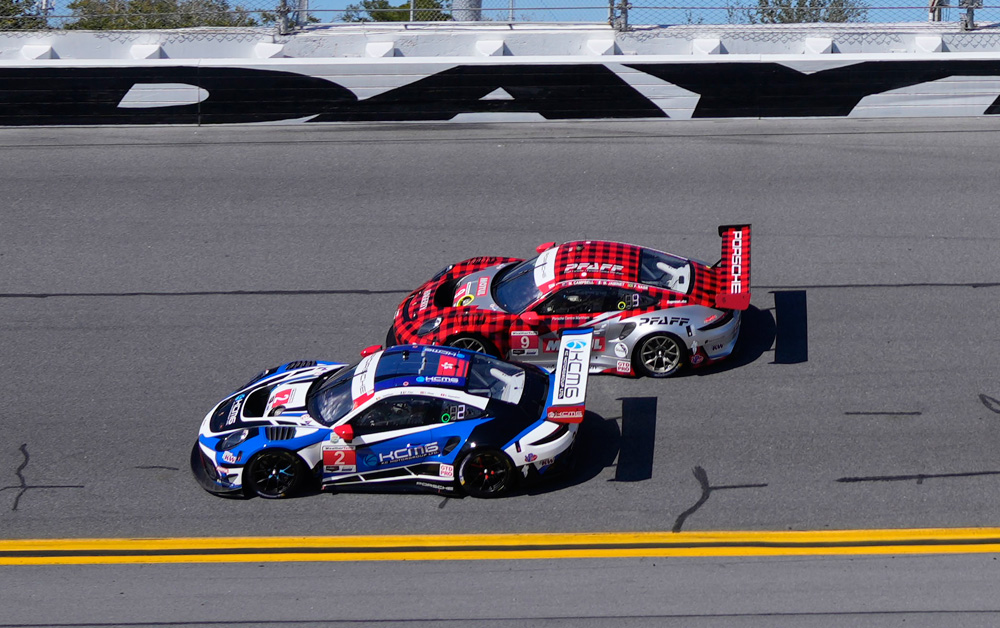 The voiceover for ABC’s old “Wide World of Sports” show was made famous by Jim McKay for his citation of a line that never ages: “The thrill of victory…and the agony of defeat.”

Porsche factory driver Laurens Vanthoor left the Rolex 24 At Daytona with the full register of feelings about the latter as the Belgian tried like mad to earn the GTD Pro class win. Vanthoor, IMSA’s 2021 GTD class champion with the Pfaff Motorsports Porsche team, was locked in a duel with his former outfit, taking on Porsche stablemate Mathieu Jaminet while teetering on and over the edge to deliver his KCMG Porsche squad the victory on its IMSA debut.

The Frenchman and the crew at Pfaff Motorsports got to experience the thrill of victory, Vanthoor indeed thrilled viewers as he wore out the rear bumper on Jaminet’s 911 GT3 R but left Daytona absolutely gutted after coming so close to achieving success.

That’s the brilliance about McKay’s line — Vanthoor and his KCMG co-drivers ended up standing on the podium, but they might as well have been a million miles away from Jaminet and the Pfaff group as the emptiness of defeat lingered around them to the right of the winners.

Given a few days to process the outcome, Vanthoor was left to deal with the emotions of getting by Jaminet for a brief period in the run to the checkered flag and settling for third after a clash and spin at the Le Mans nee Bus Stop chicane ended KCMG’s 24-hour pursuit of victory.

“Still hurts almost as bad as directly after,” Vanthoor said of the lingering disappointment that landed after coming to a stop in the No. 2 Porsche on Sunday. “I mean, you’re in this fight, you got a car to win…these opportunities don’t come along every year. I tried everything I could imagine to make it happen, but it wasn’t enough. And of course, like last night, you’re lying in bed, two or three hours awake, and the movie’s just playing in your head. What did I do? Could I have done this differently? Should I have done this differently? That’s obviously very easy in hindsight because you have time to think about it at that moment, not to make split-second decisions and go for it.

“The only thing which does ease the pain — and eases quite a lot actually — is to see pretty much the whole internet celebrating the fight and almost giving me more nice words than for past victories. Still doesn’t put the Rolex on my wrist. But, you know, that’s sports. You always have a winner and a loser, and I guess I’ll have to try to get that Rolex another day.”

Vanthoor shared the KCMG Porsche with Alexandre Imperatori, Dennis Olsen, and Patrick Pilet, all of whom deserve just as much credit for being in a position to win as the driver who put on the heroics for the NBC cameras.

Once he began processing the loss, Vanthoor was able to understand the reaction racing fans at Daytona and those watching worldwide had after seeing the KCMG and Pfaff Porsches trade high-speed body blows.

“I felt that I was the one who was most destroyed the first hour; every time I sat down and started thinking about it deeply, I started having tears in my eyes,” he said. “And everybody else, obviously — Patrick, Dennis, Alex and the team. I mean, it’s no secret that a win would have been 100-percent preferred, but they were all massively supportive. On one hand as well, they were laughing with a tear in their eye, which gives me goosebumps. But afterwards, I saw some pictures — I think it was a moment when I passed Mathieu the first time, that everybody stood up and was screaming like hell. I think the range of emotions and the last hour, last minutes, was huge for everybody.”

The competitive anguish associated with coming up short on Sunday will eventually subside for Vanthoor. Whether he’ll be able to reconcile the loss and move on without feeling its sting is another topic altogether. That’s the stinging part of “the agony of defeat.” Until he gets another shot at earning his first win and Rolex watch at Daytona, Vanthoor will have plenty of time to watch the replays that made the Rolex 24 simply unforgettable.

“I felt I was the one the most disappointed because I let other guys down by not having completed it,” he said. “But I haven’t had one single disappointed look towards me, which also made me feel better in that way. It was special with all the comments and feedback. I think, honestly, I have more positive comments or nice words compared to when I’ve won Le Mans in 2018 in GTE, for example, which was a reasonably big race… I haven’t seen the full show from the outside, but I guess it must have been special.”