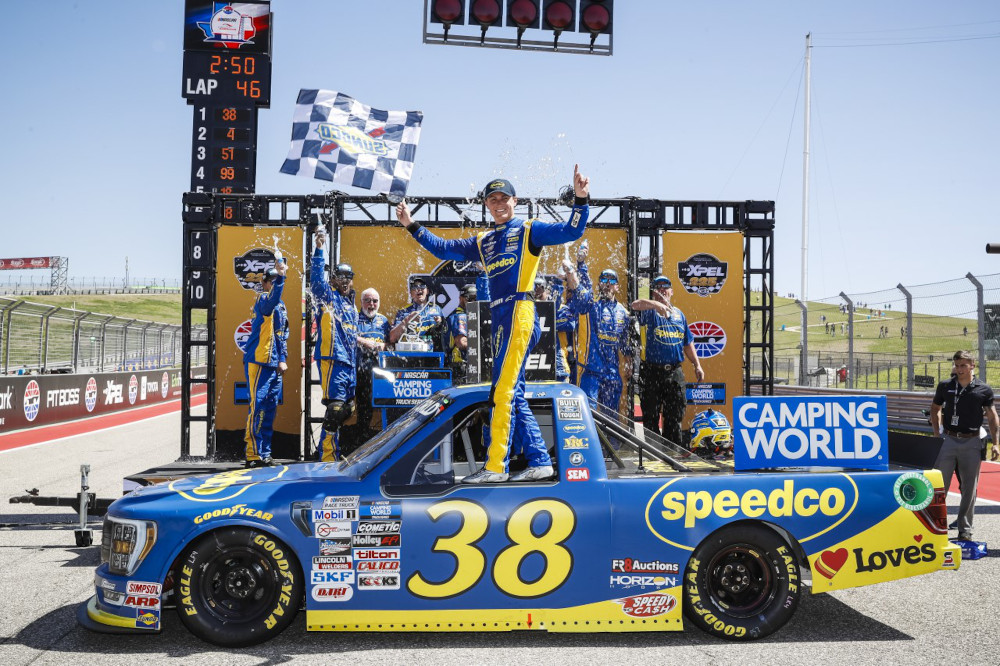 Ultimately, Zane Smith was out front when it paid off Saturday afternoon at the Circuit of The Americas road course. He led only 11 of the 46 laps – winning Stage 1, Stage 2 and then took the race lead with two laps remaining in the second overtime period to earn the victory in the XPEL 225 NASCAR Camping World Truck Series race.

It marked Smith’s second win of the 2022 season – fifth of his career – and the second consecutive win at the 3.41-mile, 20-turn COTA circuit for his Front Row Motorsports team, who celebrated in Victory Lane last year with driver Todd Gilliland.

Veteran Kyle Busch – who led a race best 31 laps – led the vast majority of the race and held the point on the start of that final overtime. But his closest challengers Stewart Friesen and Alex Bowman went in hard to the Turn 11 hairpin turn making it a three-wide door-to-door-to-door trying to wrestle the lead from Busch, the series all-time winningest driver.

As that was happening, the 22-year-old Californian Smith simply drove under the slowed trio, taking the lead and then holding off John Hunter Nemechek for the win by 3.529s.

“Once I got back up there, I was doing my best to read how those guys were racing,” said Smith, who drives the No. 38 Front Row Motorsports Ford.

“It happened like that in such dramatic fashion and had to come from the back. It’s just a huge statement for this team really. Every single race this year I’ve been in contention to win.

“This whole team; just awesome to see how it all worked out,” he added.

Had his bold move to the front paid off, it would have been Friesen’s first win in the series since 2019 and the first career victory for Hocevar, who was also running among the top three late in the race but got shuffled back in the wild restart action. Parker Kligerman, who had run among the top five all afternoon, ran out of gas and ultimately finished 19th.

“Felt like we deserved that one, but it doesn’t matter if you deserve it or not, you’ve got to be the first one to the checkered flag and we were not,” Busch said.

The race featured 10 lead changes among eight drivers and had eight caution periods.

“In races like this, you know it’s never over till it’s over and that is the very definition of that,” Smith said.